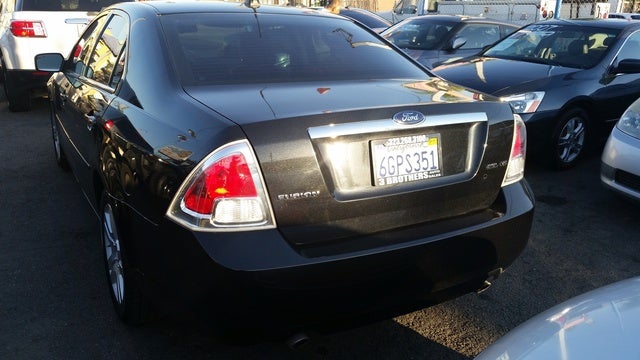 Average user score
4.8 ⁄ 5 stars
Based on 24 reviews
Great Car by 1guyfrom_Yuba — This car has been incredible. Fuel economy is adequate but cruises like its big brother the Crown Victoria. The ride is very smooth, nimble steering and performance makes this car a dream on the road.... Read more
This Car Is So Wonderful, I Reccommend It Highly! by carisue143 — This car drives AMAZINGLY! I usually don't let anyone else drive it but when my friends do they immediately say how nice it drives. I have had this car for over a year and racked up almost 20,000 ... Read more
Over All A Very Good Mid Sized Sedan, Priced Well, And Built Well. by pcfl757 — After looking at a lot of mid sized cars, I looked at the Fusion again, it was the first car I looked at in this buying experience. I have been buying a new car about every 4 years or so an the same o... Read more

The 2009 Ford Fusion does what most Fords do well: It handles and performs to a high standard and is Fort Knox safe.

Alas, all the support from die-hard American-built car buyers can’t detract from the 2009 Fusion’s distinct lack of power, its road and engine noise, and the fact that many of its options are standard on every one of its competitors. 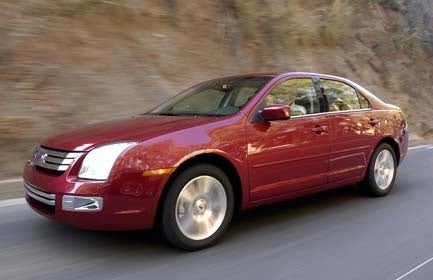 It isn’t easy to be the last car in a line set for a major overhaul, but this describes the 2009 Ford Fusion to a tee. It attempts to give a decent ride for a decent price, and for the most part it does, but when it’s pitted against its competitors, the car’s real shortcomings are revealed. In short, the 2009 Ford Fusion is a midsize car trundling around the middle of the pack, and with many upgrades in the works for the 2010 version, the sporting aphorism describing this year’s model might be, “there’s always next year.”

Ford's Fusion debuted three years ago, and the ’09 has been declared the best yet. Mixing together two contrasting elements, a sporty platform, found in the last-generation MAZDA6, with the traditional American values of a spacious interior and brash styling, the 2009 Ford Fusion comes off as a sensual hybrid, giving it a hand up in the luxury category of its class.

Off the bat, and slicing foul, the latest Fusion carries the same engines as the outgoing MAZDA6: four- and six-cylinder units that are short on power and fuel economy. The trim line-up for this midsize, four-door sedan goes as follows: S, SE, and SEL. All three trims come in a front-wheel drive, standard four-cylinder version. The SE and SEL also come in a V6 with all-wheel drive.

A new and important attribute of the 2009 is stability control, a safety feature that improves handling and wheel traction that has been missing on the Fusion since day one. A Blue Suede options package, as well as several new exterior colors, have all been made available. These, framed by Ford’s new-look bold three-bar grille - its trademark razor look - help put on the Ritz even when it’s off to the grocery store.

The 2009 version is also the first full year of the Fusion to offer Ford's cool Sync system. This innovative technology allows drivers to control cell phones, MP3 players, and other devices through voice controls. All in all, the 2009 is the product of little change. A major overhaul is scheduled for 2010. 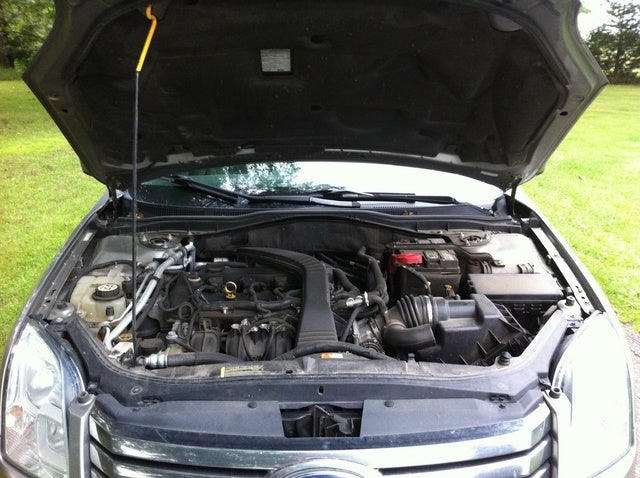 The Fusion's standard 2.3-liter inline-four engine delivers 160 hp and 156 lb-ft of torque. A five-speed manual is standard, with a five-speed automatic optional. The upgraded 3.0-liter V6 engine improves power significantly, with performance jumping to 221 hp and 205 lb-ft, and gets a standard six-speed automatic. However, even with the optional engine upgrade, the vehicle's closest competitors outperform the Ford Fusion by approximately 50 horsepower.

Fuel economy for the base engine is 20/28 mpg. The optional V6 reduces these numbers to 18/26 mpg. The ’09, you could say, has a healthy thirst that is quenched by regular unleaded.

Equipped with a manual transmission, the 4-cylinder version feels adequate, despite its slower-than-9.2-second 0-60-mph time. The manual transmission is not unpleasant to use. The Fusion’s V6 offers good passing and merging power, even with the additional weight of AWD. But these models require large throttle inputs for best performance and lack the solid around-town response of other V6 rivals. The automatic transmission is responsive, but a manual-shift mode would be useful, especially for hilly terrain. Both engines can go up to 90,000 miles between maintenance intervals, though regular fluid and filter changes are still required.

The new Fusion feels compliant and controlled over sharp bumps and patchy pavement. Its suspension tuning allows minor float on high-speed humps and dips. Versions equipped with the available sport suspension differ little from those without it. 16-inch-diameter “painted” aluminum wheels are standard on SE models, while the top-of-the-line SEL gets 17-inchers standard. Two options packages - Sport Appearance and Blue Suede - each offer 18-inch aluminum wheels fitted with 225/45R18 tires.

All 2009 Fusions are pleasant and competent, abetted by nicely weighted, responsive steering. In a straight line, they all feel solid and well-planted, but a wide turning circle frustrates in close quarters. Front-drive V6 versions suffer mild torque steer in low-speed acceleration. AWD traction is a boon on slick roads - even if only one wheel has traction, the Fusion can keep moving.

Both the four-cylinder and the V6 emit a noisy full-throttle growl and recede into the background during gentle cruising. The V6 is quieter overall. Wind rush is well controlled, but tire thrum can be heard over grooves and coarse pavement.

The 2009 Fusion is one of the more entertaining vehicles in the family sedan class. The Sport Appearance and Blue Suede packages score points because of their sport-tuned suspensions and 18-inch wheels that up the Fusion's fun factor another notch.

Checking your “vector, Victor” is made easy by dashboard gauges that are easy to see and read. Audio and climate systems rely on too many buttons and take time to sort out. Ditto look-alike audio/cruise buttons on the steering wheel. The navigation system is easy to program, but set too low on the dashboard. Antilock braking is standard on all Fusion trims.

The Fusion provides adequate headroom and legroom for 6-footers. Seats are supportive, a bit larger than the class norm, and relatively high-set to contribute to fine outward visibility. Except for the base S, '09s come with six-way power adjustable driver seats. All trims include a tilt and telescopic steering wheel for that tailor-made feel.

In back, adult-adequate headroom, good foot space, and fine support all hold true, though once the front seats are put further back, occupants must sit knees-up. Long doors are a hassle in tight spots, but open wide to benefit entry and exit. The rear seats use a spring assist to fold forward in a 60/40 split to reveal a pass-through into the trunk, and the front passenger seat folds forward, allowing the Fusion to swallow almost anything offered at home improvement stores. Also, Ford says the Fusion has the largest trunk in its class.

In addition there’s a pop-up storage bin on top of the instrument panel, a center armrest that opens to accept a large number of items, and six cupholders throughout the interior. The Fusion features several convenience features, such as grocery hooks in the trunk. Standard on all Fusion SEL models (and optional on SE) is the Ford Sync hands-free communication system. A SecuriCode keyless entry keypad is now standard on all SEL models. Notable optional equipment includes a satellite-based, voice-activated navigation system, reverse sensing system, rear spoiler and an Audiophile AM/FM premium sound system that features a 6-CD changer with eight speakers.

In National Highway Transportation Safety Administration (NHTSA) frontal-impact crash tests, the 2009 Ford Fusion earned a perfect five stars for front occupant protection in frontal and side crashes. It received four stars for rear protection in a side crash. This is in part thanks to six standard airbags, which include full-length side-impact bags. In Insurance Institute for Highway Safety (IIHS) frontal-offset and side-impact tests, the Fusion scored "Good" ratings - the highest possible. Antilock disc brakes and traction control are standard on V6 models, and stability control is optional on all Fusions this year, though it should be noted that most top family sedans offer this important feature as standard equipment. Reverse parking sensors are also optional.

Nothing makes U.S. car buyer's hearts flutter more than when an American car appeals to their aesthetics and pocketbook, and the 2009 Fusion certainly tickles its owners on both fronts. “This car goes through the turns like it is on rails!” says one lifetime Ford owner. “Options: The best, bar none. No other manufacturer can touch the amount of standard/available options at this price level,” says another. “I recommend this car to anyone who is looking for luxury appearance at a bargain price!!!” gushes a first-time car owner. A telling tale, illustrating the 2009's lack of umph, is that about a third of Fusion buyers select the optional 221-horsepower, 3.0-liter V6. Many give it thumbs down on engine noise, gas mileage, and performance.

Have you driven a 2009 Ford Fusion?
Rank This Car

What Can Cause My Speedometer To Start Going Crazy

When I go and crank my car the speedometer starts going crazy I can be sitting at a red light with a brake on or in park and it says I'm doing 120 and then I'll hit the gas to try to go it's like i...

Clicks But Wont Turn Over

So sometimes i go to start my car and i just get clicks. The battery is fine going to clean it today a little bit corened only my car has seemed to do this when it is shut of for a short periods of...

2009 fusion transmission acting up only when the sun is beating on it while parked runs great in morning craziest problem I've ever had. I can run it 5 miles turn off car and everything good I'm lo...

My Ac Stoped Cooling And Blows Wet White Smoke That Smells Out The Dash?

My ac leaks Freon and smoke that smells seem cool and wet comes out the dash all day the day of recharge had evap coil heater core compressor changed still does shop put dye and stop leak in it di...

Why Is My 2009 Ford Fusion Taking A Minute To Pick Up Speed And When I Pres...