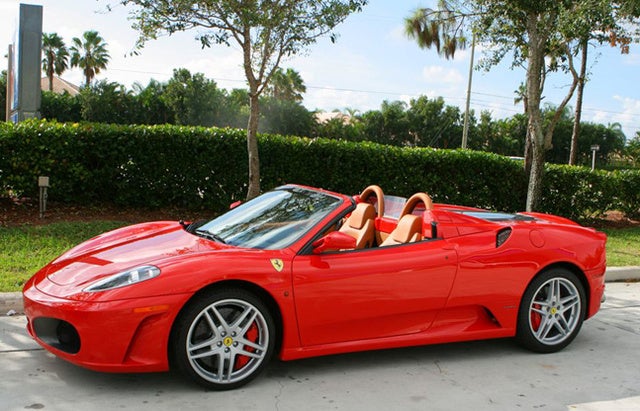 Average user score
4.5 ⁄ 5 stars
Based on 5 reviews
An Emerged Baby Which Is Very Strong by Khalid — The car is amazing. I like its look and performance. It really is a baby ferrari as I suppose its everything good built V10 490 BHP really makes it the most wonderful ferrari car ever built in Italy. ... Read more
My Car by Arnage_69 — i like this car. Excellent Perfomace. Overall super. Super Build Quality. Super Appearance. This car is one of the best Racing car. i like it . i am using it racing with my friends. most races i have ... Read more
Fast Car!!! ~ by Owain — The Car is an amazing car. It has wicked speed and acceleration. The car itself looks amazing. I would rather own this car then a Luxury car. This car is really fun to drive. I do wish the speed limit... Read more

The accolades for the Ferrari F430 seem to keep coming at lightning speed, which also pretty much describes how fast this supercar can travel. Clocking a 0-to-60 time of 3.9 seconds and topping out at a maximum speed of 195 mph, the F430 has few competitors on this planet (unless you count the Space Shuttle). Lamborghini's new LP560-4 Gallardo coupe slightly bests the F430 off the mark, jumping out from 0 to 60 in just 3.7 seconds, but it doesn't match the F430's superb handling, especially in tight corners, according to reviewers.

Now in its sixth year, the F430 receives no changes or updates for 2009. Available trims include the base Coupe and the convertible Spider. Both draw their design inspiration as well as a significant number of components from Ferrari's F1 racers. For instance, the F430's up-front air intakes, which funnel air into large radiators to cool the engines, were inspired by similar systems on F1 racers. The F430 also comes equipped with an F1-type electronic differential, called the E Diff, which ensures maximum road grip as the car comes out of turns, helping to reduce or eliminate wheel spin. In addition, drivers can adjust the electronics governing the F430's suspension, stability, and traction-control settings using a steering-wheel-mounted rotary dial called the manettino, which is another technology borrowed from Ferrari's F1 race cars.

Outside, the F430 displays a distinctive and aerodynamic shape designed in collaboration with Pininfarina, the Italian automotive designer. The wedge-shaped body tapers from the hunky rear end, which houses the engine, to the curvy front end, with its bold fascia. Ferrari designed every exterior component of the largely hand-built body to ensure the height of functionality as well as aesthetics. The F430's flat underbelly and air-flow systems, for instance, not only cool the engine, but also help keep the car firmly planted to the road. Even the side mirrors have specially designed twin mounting arms that help channel airflow to the engine intakes along the lower sides of the car.

The two-passenger, two-door coupe (or berlinetta, as the Italian automaker calls it) positions the engine in a compartment behind the cabin. The 4.3-liter V8 powerplant generates 483 hp and 343 lb-ft of torque and links to either a six-speed manual transmission with a gated shifter or Ferrari's optional F1 automated-clutch manual transmission, which the driver can control using paddle shifters located on the steering wheel column. The engine posts a combined city/highway fuel economy number of about 18 mpg.

The Spider comes equipped with an automatic electric top, which stows in its own compartment with a body-color tonneau cover behind the seats but in front of the engine. The top opens and closes in 20 seconds. In addition, the Spider has sturdy beams and a rigid chassis designed to reduce body flex.

The F430 features a comfortable, luxurious, and driver-friendly interior. The slim center stack and console ensure more interior space for both the driver and passenger, while controls and buttons are within easy reach for the driver. Ferrari mounted the starter switch on the steering wheel column to make it easier for the driver to access, and the sport seats have been ergonomically designed, as well as sufficiently bolstered to keep occupants firmly in place.

Features such as Bluetooth wireless connectivity, a voice-prompted navigation system (with no screen), and a premium sound system all come standard. Beyond that, Ferrari offers owners a wide range of customization options, including a choice of 12 leather colors, eight carpet colors, and aluminum or carbon-fiber inserts, as well as 16 exterior colors.