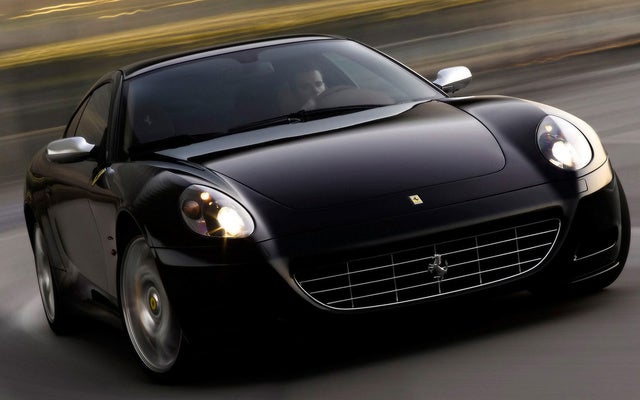 CarGurus has 15 nationwide 612 Scaglietti listings and the tools to find you a great deal.

A bit of bureaucracy for Ferrari’s flagship in 2009, and for once that’s a good thing. Drivers who are able to take their eyes off the road for a second or two will notice the flashy red switch that’s suddenly appeared on their steering wheels – the manettino. This allows the driver to control settings in five modes for suspension, stability and traction control and shift points for the F1 gearbox, which was also re-calibrated for faster shifts this year.

Not that anyone expects a Ferrari to be anything other than fast, but with these updates the F1 transmission now moves ever closer to actual F1 shift times. Previously, the F1 gearbox would swap cogs in around 100 milliseconds, as opposed to the 50-millisecond times found on the track. Here we’re splitting the difference, and it’s negligible to anyone but a computer.

And computer or no, that’s impressive, since the transmission is dealing with 532 hp and 434 lb-ft of torque from a 5.7-liter V12. If you’re looking to hit 60, the 612 will get you there in under 5 seconds, and 200 mph should be just out of reach. That’s pretty much unheard of for a car that can carry four passengers and two sets of golf clubs – the standard measurement of luxury luggage.

And thanks to the new manettino switch on the steering wheel, your 612 can go from comfortable GT touring car to track-day contender with just a few clicks. It’s been seen on other Ferraris, but it debuts for the 612 in 2009 and makes adjustments that much easier. Of course, yours will likely be the only car on the track that comes with a power-closing trunk, Bose stereo with Bluetooth, navigation and a 15GB hard drive, rear park assist and heated power mirrors – all standard with the Scaglietti.

With the changes we’ve seen in 2009, Ferrari’s flagship gets a bit more speed appeal to hopefully quell the doubters that have been ever so vocal since its introduction. Unfortunately, none of the changes affect the Scaglietti's looks, which have been the primary complaints we’ve heard. However, at 200 mph it’s hard to hear those complaints, unless they’re coming from screaming rear passengers.

Have you driven a 2009 Ferrari 612 Scaglietti?
Rank This Car

CarGurus has 15 nationwide 612 Scaglietti listings and the tools to find you a great deal.