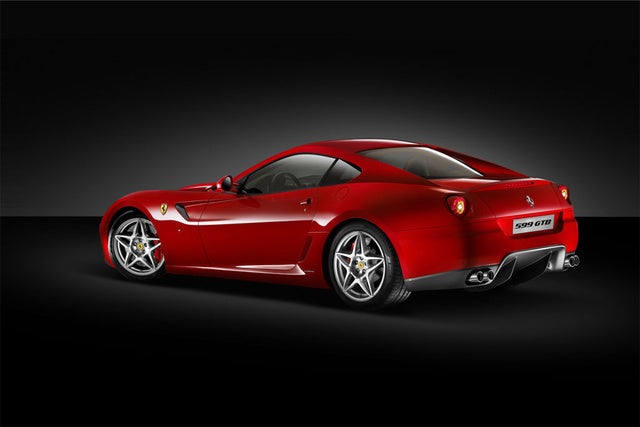 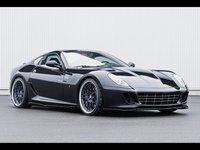 The quintessential two-seat, two-door sports roadster, the Ferrari 599 GTB Fiorano coupe evolves for 2009 into two trims, although the primary difference between the trims centers on the transmission. The base 599 GTB Coupe comes equipped with a six-speed manual transmission with overdrive, while the 599 GTB F1 receives a six-speed automatic transmission with overdrive. Both retain Ferrari's throaty 6.0-liter all-aluminum V12 engine, which carries over from the previous year. It generates an impressive 612 hp and 448 lb-ft of torque at 5,600 rpm, and drives the street-legal racer from 0 to 60 in about 3.7 seconds (or less) and to 124 mph in just 11 seconds. The 599 GTB has a top speed of 205 mph.

Fuel economy numbers check in at a combined 17.9 city/highway mpg, although one doesn't purchase a Ferrari for its fuel efficiency. A large 27.7-gallon tank ensures you have plenty of fuel for whatever journey you plan.

To help keep the 599 GTB firmly planted to the ground, it comes equipped with a high-performance F1-Trac traction system, borrowed from Ferrari's F1 race cars. The system ensures optimal traction and stability at high speeds and in tight corners, as well as on slick road surfaces. In typical operation, it monitors the speed of both the front and rear wheels, and modulates power accordingly. Drivers can use the manettino dial located on the steering wheel to choose from a variety of settings for the traction, stability, and damping-control systems, including Sport and Race modes for aggressive driving, and Ice or Wet settings for maximum safety in poor road conditions.

Other high-performance systems include the SCM magneto-rheological suspension, which controls suspension damping to perfectly balance sporty handling and ride comfort. Four sensors located on the suspension wishbones monitor road surfaces and the car's movements, and react in just 10 milliseconds to ensure an optimal ride. Reviewers unanimously report handling that matches any sports car's, with a lack of the harshness associated with shorter-wheelbase two-seaters. As a result, the 599 GTB can easily double as a daily driver and grand sport tourer.

Famed Italian automotive designer Pininfarina sculpted the 599 GTB's swooping lines, but also paid special attention to the car's aerodynamics. Airflow around the car helps keep it planted to the road surface, while air intakes in the front and sides of the vehicle funnel air into and out of the engine compartment to help cool the big V12. The air intakes and outlets also serve as design elements. Other exterior features include a wraparound rear window and singular LED rear lights, rather than Ferrari's signature circular quad lights.

Inside, standard features include power-adjustable leather racing seats with carbon-fiber siderests, a leather-wrapped steering wheel, dual-zone climate control with separate controls for the driver and passenger, and solid aluminum instrument controls. Drivers also have the option of personalizing the car to fit their tastes. Personalization options break down into four categories, including racing options such as carbon ceramic-material brakes and four-point harnesses, and materials options such as a new Enzo Ferrari-inspired carbon-fiber steering wheel. Daytona-style seats with perforated inserts and a satellite navigation system, as well as exterior and interior colors, are among the other features available through Ferrari's personalization program.

Guru5NYT2 The absolute best Ferrari for the buck in todays market....period. $125 buys a perfect example....I love mine.