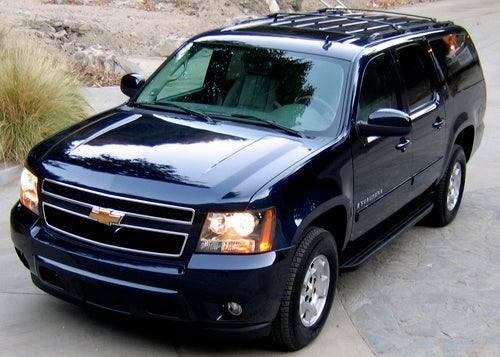 With a new six-speed automatic standard in 1500 trims, as well as a multitude of new features including blind-spot alert and heated and cooled front seats newly standard on LTZs, a wireless cell phone link, a dual-screen DVD entertainment system, and a backup camera, 2009 provides plenty of reasons to be impressed with Chevrolet's Suburban.

Even with flex-fuel capability and cylinder deactivation, we have to wonder whether the '09 Suburban, whose mileage rating never exceeds 17 mpg, remains a viable product.

The 2009 Chevrolet Suburban is a behemoth, but if fuel efficiency isn’t a concern, you really can’t do better. A well-optioned LT Suburban is both a tremendous compromise on luxury and practicality and a great value for the class. Look over the options list, and you can have a truck that fits everything you need.

In continuous production since 1935, longer than any vehicle in history, the Chevrolet Suburban has been produced on the GMT900 platform since its redesign for model year 2007. Seating up to nine, it shares its basic design with the Chevrolet Silverado and is the largest SUV in its division.

New for 2009 is a blind-spot alert now available on the LTZ as well as heated and cooled front seats newly standard for that trim level. Also added this year are a wireless cell-phone link, dual-screen DVD entertainment, and a backup camera that has been criticized by owners and reviewers alike for excessive image distortion. 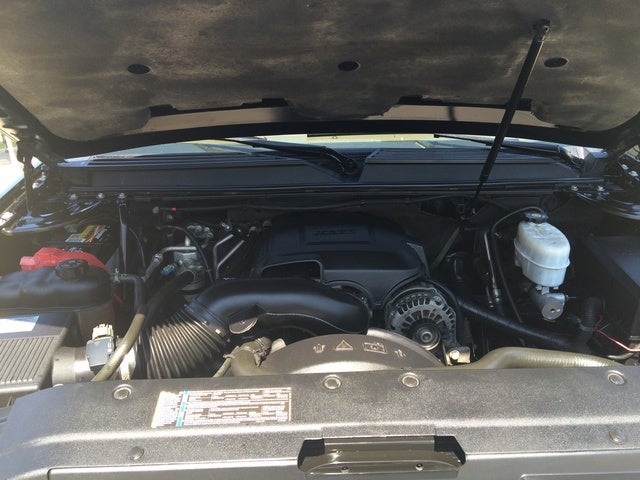 While 2500s have previously enjoyed the six-speed automatic, it’s a new addition to the 1500 lineup, replacing a four-speed. 1500 V8s come with GM’s Active Fuel Management cylinder deactivation, and the 5.3 will run on E85 ethanol. All versions are available with either RWD or Autotrac 4WD that can be left engaged on dry pavement and includes a low-range gear for off-road use. EPA estimates have yet to be released for the 5.3 and 2500's 6.0, but the 1500’s 6.0 will is rated at 12/17 mpg.

Power is exceptional across the lineup, with only the base engine struggling a bit under capacity loads.

Among the only complaints encountered with the Suburban, across all trims, is that when equipped with the optional 20-inch tires, steering response can become a bit aggressive, especially at speed. That said, the Suburban provides one of the best rides of any entrant in its class, helped by a 130-inch wheelbase that minimizes reactions to inconsistencies. Bumps and ripples are absorbed with minimal notice, and body lean and roll are kept well under control, especially considering the sheer size, height, and weight of this largest of SUVs.

The Suburban exceeds class standards with regard to style, design, and comfort on the inside, providing a sleek, practical interior with impressive comfort as well. Gauges are well-placed and easy to read, although some have complained about relatively recent changes in font that make markings harder to decipher for some owners.

Room is abundant in all but the third row, which makes the claim of a nine-person capacity a tad dubious, unless at least three of those people are children. In fact, the middle position in all of the bench seats is slightly less than comfortable, although not impossibly so. Adjustable pedals make for a wide range of options with regard to seating position, even for shorter drivers, and entry to and exit from the third row is less of a task than in competitors.

A welcome surprise is a navigation system that has received almost universal praise, both for placement and readability, as well as uncomplicated absorption of secondary functions. Noise is kept well under control both inside and out, with neither wind nor road noise intruding into the cabin. All engines are similarly refined and quiet, even under load, with the 5.8 receiving particular praise for its composure under all conditions.

All Suburban trims come standard with dual front and curtain side airbags with rollover deployment, antilock four-wheel disc brakes, an antiskid system with rollover sensor, a tire-pressure monitor, and daytime running lights. The LTZ adds a rear-obstacle-detection system that has received criticism for distorting the rear view excessively and a limited-slip differential.

NHTSA ratings showed five stars for all categories excepting rollover and rollover resistance, which were rated at three stars.

The Suburban is seen as a highly versatile vehicle, offering comfort, utility, and luxury, depending on configuration. With the ability to tow over four tons, this workhorse has found a place in many niches. Owners have found very little to complain about, with fuel efficiency leading that short list, and with the addition of the six-speed automatic this year, it seems GM has been listening.

What's your take on the 2009 Chevrolet Suburban?

Users ranked 2009 Chevrolet Suburban against other cars which they drove/owned. Each ranking was based on 9 categories. Here is the summary of top rankings.

Have you driven a 2009 Chevrolet Suburban?
Rank This Car