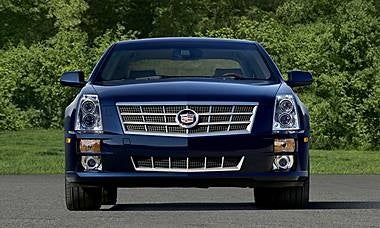 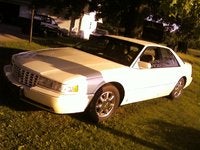 For a full-size sedan, the 2009 Cadillac STS exhibits tight and precise handling, with a strong powertrain and a significantly cheaper pricetag than its European competitors.

A lack of storage space and a surprisingly bland and somewhat low-grade interior detract from the 2009 STS.

If you're looking for a more affordable version of a BMW or Mercedes luxury sedan, the 2009 Cadillac STS offers a decent alternative. Though it doesn't quite match its European counterparts in terms of power, refinement, and luxury trappings, the '09 STS comes close enough. Both V6 and V8 engines deliver exciting punch, its agile handling feels satisfyingly sporty, and a wide array of standard and optional features provide plenty of creature comforts.

Unchanged after a 2008 facelift, the roomy STS competes easily with the BMW 5 Series and Infiniti M Class in terms of high-end comfort and satisfying driving experience, though some reviewers find the quality of its interior materials somewhat lacking compared to its European counterparts. The '09 STS offers five trim choices. The Base comes only with a V6 engine, while the Luxury and Luxury Performance trims offer a choice between the V6 and a slightly more powerful V8. The rear-wheel-drive configuration can be replaced with optional all-wheel drive.

Minor alterations for 2009 include a new tire inflator kit that replaces the small spare tire, Bluetooth availability for trims without the navigation system, and a new speed-limit alert on the navigation system. The '09 STS seats four comfortably in a luxurious interior that offers a long list of both standard and optional high-tech gadgetry.

Slotted between the sporty CTS and behemoth-like DTS, the full-size STS sedan has never gained the popularity enjoyed by those other Cadillacs, but the luxury sedan offers confident acceleration, expert handling, smooth comfort, and a quiet monster of a V6 engine. Cadillac has spent the last few years revamping its image in an effort to attract younger buyers. Radical redesigns and more powerful engines signify a new concentration on blending luxury with both superior performance and cutting-edge technology. The 2009 Cadillac STS represents the company meeting this goal pretty well.

Both engines are paired with a six-speed shiftable automatic. Test drives reveal quiet and confident power from both the V6 and V8, with quick off-the-line acceleration that overwhelmingly earns praise from owners. Several critics question the need for a V8, as the V6 delivers premium performance and power with better fuel economy.

Built on the Sigma platform, the 2009 STS exhibits top-notch handling reminiscent of a sports car, rather than a full-size luxury sedan. Its independent short and long arm front and mulitlink rear suspension provides a firm, yet forgiving ride – never too harsh to interfere with passenger comfort, but also taut enough to avoid float and wander. For its large size, the '09 STS takes corners tightly, with only slight body roll at higher speeds. Better yet, Cadillac's optional Magnetic Ride Control adapts the suspension for different driving experiences – the Touring mode for a softer ride and the Sport mode for more road feedback. Reviewers find the Sport mode superfluous, as the Touring feels amply tight and precise for sporty dynamics.

The V8 can be outfitted with a Performance Handling Package, which sports up the sedan with Brembo brakes, a stiffer suspension, and larger 18-inch wheels. This gives more direct road feel to the driver, but does add more bumps and jolts along the way.

Most reviewers are impressed with the STS's streamlined ride, but find the steering often feels mushy and unresponsive. Braking, however, remains top-notch for a large sedan, with a 120-ft stopping distance from 60 mph. The automatic AWD option also provides confident road grip in slippery situations, and both the 17- and optional 18-inch tires feel solid and strong. The larger wheels do add slightly more noise to the quiet cabin. Critics agree that the '09 STS shines in the handling department, with a nimble, agile ride and better-than-expected maneuverability for a large sedan. 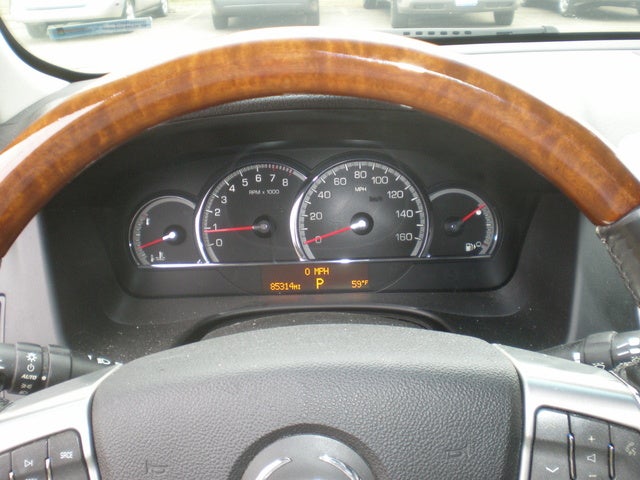 The sedan seats up to five passengers, but four will feel more comfortable on longer trips, particularly with the cramped 38 inches of rear legroom. Passenger space overall falls behind that of European and Japanese luxury sedans, but still provides high-end comfort and a supportive ride. Front passengers get a nice 42.6 inches for their legs, but the 39 inches of headroom and the high-set center console may feel a bit claustrophobic to some.

Rear seats do not fold down, but do have an armrest that doubles as a storage compartment and a pass-through to the trunk. The 14-cubic-foot trunk seems rather small for a full-size sedan, and its tiny opening makes loading larger objects difficult. A cargo net and tiedowns are standard in the Luxury and Luxury Performance trims. Storage space in general seems limited throughout the cabin, with only a few small compartments and a small glovebox.

Driver comfort gets a helping hand from standard power tilt and telescoping steering as well as wheel-mounted audio and cruise controls. All trims feature 8-way power front seats, and all but the V6 Base add 4-way power lumbar and memory settings for the driver. Critics find the controls well laid out and easy to reach, except for those governing the wheel and seat memory settings, which can be confusing to learn at first. Another reviewer says the buttons and knobs feel too small and clustered too tightly together. An optional heads-up display projects driver information onto the windshield directly in front of the driver to avoid having to take eyes off the road.

Passengers get treated to soft leather upholstery in all trims, and all but the Base come standard with heated seats in both rows and a cooling feature for the front seats. The Base V6 offers a full array of power features, remote entry and remote start, a trip computer, Bluetooth capability, and an 8-speaker CD player with a Bose sound system. Upgrading to the Luxury package adds real wood trim, used tastefully and sparingly throughout the cabin, and a 6-CD player with MP3 jack and satellite radio. The Luxury Performance trim goes the whole nine yards, adding a touchscreen navigation system and a DVD player, with the V8 version also getting a power moonroof (optional for all other trims).

The 2009 STS earns high marks in crash tests, with four stars for front-side impact and five stars for rear-side impact and rollovers. The Insurance Institute gives it a solid Good rating. Standard equipment includes traction and stability control as well as four-wheel ABS brakes with brake assist and electronic brakeforce distribution. The dual front airbags feature passenger airbag cutoff, and side curtain airbags cover both rows. Rear parking sensors are standard on all trims and help with some of the rear visibility issues caused by large headrests and thick pillars. Automatic headlights and foglamps light the way, while a tire monitor measures pressure in the standard 17-inch or optional 18-inch tires.

The '09 STS features an impressive array of high-tech safety options, such as a lane-departure warning system that uses a camera to keep track of the lane marker and sends an alert to the driver if the car drifts. A blind spot alert shines a light in the side mirrors when it senses an approaching car. Active steering, optional only on the V8, automatically turns the front wheels into a skid when it senses slippage in the rear wheels. Other options include adaptive cruise control, which maintains a constant distance between you and the car ahead, and Intellibeam, which automatically dims your high beams.

A powerful engine, tight handling, and luxury comfort characterize the '09 STS for most of its owners. They make particular mention of the sedan's tight grip and road-hugging cornering. The quiet ride reminds drivers they're in a Cadillac, and the high-tech features offer lots of fun toys to play with and enjoy, especially the helpful adaptive cruise control. The only major complaint focuses on the cramped rear legroom.

CarGurus owners have not yet commented on the 2009 STS, but their 2008 comments offer some insight into the virtually unchanged '09 sedan. Echoing reviews on other websites, CarGurus drivers praise the V8's speed and power and the car's overall handling dynamics. But they also say the STS cannot compete with BMW and Mercedes in terms of refinement and high-end interior fit and finish.

Have you driven a 2009 Cadillac STS?
Rank This Car

Why Does Reading Lamps Stay On When Driving

Battary Dead How Can I Open The Door

battar is dead how do i open the door

Why My Postal Code Will Not Register

my postal code will not validate!