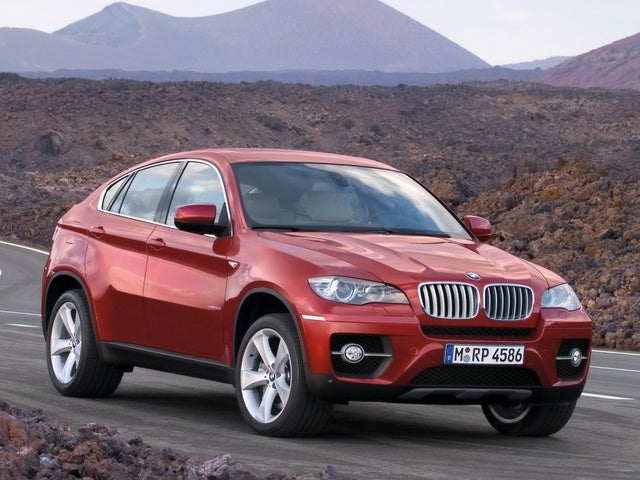 The initial unveiling of BMW's X6 "sports-activity coupe" crossover provoked much skepticism in the auto press. Journalists saw it as an awkward marriage of "coupe" (the sloping roof - but do five doors make a coupe?) and SUV (which BMW already has - the X3 and X5). However, one can't help but notice that as the initial concept has moved closer to reality, journalistic skepticism has begun to morph into racer-boy enthusiasm.

This has been especially so since BMW has confirmed the powerplants for the two trim levels. The xDrive35i motivates via a 300-hp, 3.0-liter twin turbo inline-six. The excitement, however, comes under the hood of the xDrive50i, where a new BMW engine lurks. The 4.4-liter twin-turbo V8 produces 400 hp with 450 foot-pounds of torque. This new engine uses direct fuel injection and a unique system for packaging the turbos, with a turbo for each cylinder bank and their catalytic converters set in the center of the block, between those cylinder banks. This not only makes the turbos more efficient by shortening their runners, but it also makes the engine more compact. Look for more V8-capable BMW models to make use of this engine in the future. It also makes for one very fast "sports-activity coupe," with the 0-60 blast done in 5.3 seconds, which is only four-tenths of a second slower than the Porsche Cayenne Turbo.

But the technological innovation doesn't end under the hood. With the X6, BMW is also introducing a new drive management system: Dynamic Performance Control (DPC). The X6 comes standard with BMW's xDrive all-wheel-drive system, which defaults to a 40/60 front/rear torque split. DPC, however, adds an electronically controlled rear differential that through the use of two planetary gear sets and two clutch packs directs additional torque to either rear wheel to help steer the X6. This helps on different road surfaces and to quell understeer, since it can send torque to the outside rear wheel in a turn. This system was first developed for Formula 1 racing; some reviewers find it similar in theory to Acura's Super-Handling All-Wheel Drive. Look to see this system adapted to other BMW models in the future, too. Other features are Adaptive Drive, which adjusts the suspension to suit road conditions, and Adaptive Steering, which quickens low-speed response.

The interior offers 11 leather options to match 10 exterior color choices with X6-exclusive ash-grain wood trim. Brushed aluminum finish is also available in the cabin, with sport seats up front and two individually molded rear seats. With the back seats up, it offers 26 cubic feet of cargo space. Flip them down to get 60 cubic feet. Standard shift paddles sit on the sport steering wheel as one way to shift the six-speed automatic transmission.

A full-hybrid gas/electric powertrain option will be available for 2010. BMW claims this will get about 20% better fuel economy than the standard model. Both models will be built in BMW's Spartanburg, South Carolina, plant.

Can U Please Show The Price In Rands

How much does it cost in South African rands?

What's the EPA ON THE 6 CYLINDER?

Does this vehicle come manual drive?