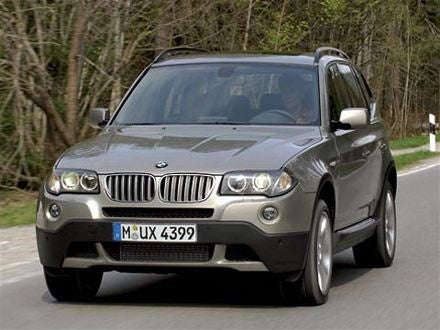 Both of the 2009 BMW X3’s suspensions, as well as its engine and manual transmission, are top-notch for its class.

A jerky automatic, standard vinyl upholstery, and too-hard seats mean the '09 X3 isn’t in it for the long haul.

It looks like the 2009 BMW X3's sporty intentions mean too little attention was paid to its automatic transmission as well as overall seat comfort. However, neither issue is enough to avoid recommending the X3. The only caveat that comes to mind is its impending refresh, coming perhaps as early as next year.

Based on BMW's E46 platform, the same utilized by the 3-Series, the X3 is BMW’s entrant in the compact crossover SUV market. With its car-like handling, immense cargo capacity, and utilitarian ground clearance with xDrive, the X3 has attempted to compete with vehicles like the Acura RDX, the Infiniti EX35, and the Land Rover LR2. The X3 is the first BMW since the legendary M1 not assembled at a BMW factory, with Magna Steyr of Austria handling manufacture until next year, when production will move to the U.S.

The X3 also held the dubious honor of being the only BMW in history to have changed visually with every model year, until 2009, which is largely unchanged from 2008. This four door seats five and will likely undergo another makeover next year as production shifts to the U.S. 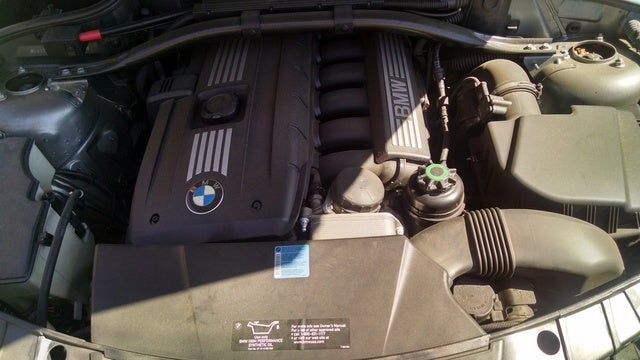 Powered by a 260-hp, 3.0-liter inline six-cylinder engine, the X3 has a maximum towing capacity of 3,500 pounds, thanks in part to its 225 lb-ft of torque. All that power means the X3 can sprint from 0-60 in less than 8 seconds, an impressive feat for what BMW dubs a “Sport Activity Vehicle.” The six-speed manual transmission has received the usual praise heaped upon BMW for its smooth and precise action, but the six-speed automatic has been described as “jerky” and reluctant to downshift. This has been aggravated by a less-than-even throttle response. With the manual transmission, expect to achieve 16/23 mpg, while the automatic transmission will perform slightly better at 17/24.

All X3s come equipped with xDrive, BMW’s all-wheel-drive system. BMW’s dynamic stability control system modulates power to all four wheels as part of their dynamic traction control, which directs power to the front wheels as needed.

As would be expected, the X3 handles like a BMW. Both handling and ride quality are among the best of any SU …ahem …SAV. With the base suspension, the ride is composed, handling is firm, and bumps are absorbed with little notice. The Sport Packages' more aggressive suspension will register bumps slightly more, but the already minimal body lean is further controlled and your ability to attack the curves is similarly increased. While braking is strong and pedal feel is firm, some testers have complained about laborious turning at slow speeds, which is exacerbated by an impressively tight turning radius.

Standard vinyl seating is not winning many friends, especially with a base price that pushes forty thousand dollars and a host of competitors that offer leather as their standard upholstery. That said, quality and detail of the interior materials are at least average for the class, which is to say quite nice. Controls are well-placed and intuitive for the most part, and the navigation system is easy to use and absorbs limited audio controls with minor complication. Its large LCD screen sits at eye level unobtrusively and conveniently. Cargo room is ample, with 71 cubic feet available.

The major complaints regarding the cabin have concerned overall comfort. While head- and legroom up front are quite substantial, cramped foot space and seats that are too firm for long-distance travel mar overall comfort. Rear seats provide the same positives and negatives, although with the heating option, at least you’ll be warm.

Wind noise, however, is kept well in check. There is very little wind rush, even at speed, and especially considering the body style of the X3. Tire noise is similarly subdued, although more so with the standard 17-inch wheels and tires rather than the optional 18- or 19-inch wheels.

The X3 comes standard with dual front, front side and side head-protecting airbags, antilock four-wheel disc brakes with brake assist and antiskid, as well as hill descent control, a tire-pressure monitor, and daytime running lights. NHSTA ratings are not available for the X3, but the IIHS has given the X3 its top rating of “Good” in all tests.

For short trips, the X3 is great. For long trips, not so much. The base seats have insufficient padding to make any long-distance travel comfortable, and the sport seats that come with the Sport Package, while more supportive, certainly aren’t cushier. That said, almost every other aspect of the vehicle has received considerable praise.

The rear window defroster on my car had a hotspot on it so when I used it in the evening time as it gets really cold up here my window shattered will BMW replace that repair it free of charge for ...

7 views with 3 answers (last answer about a year ago)

My 2009 X3 has a brake pedal going to floor. -last week had to super pound brakes in traffic. Bit later brake light went on. Checked fluid and some was lost. Topped off and all was fine. DOT 4 as s...

i have an X3 and put water in the power steering, is it ok to drive or should i drain it