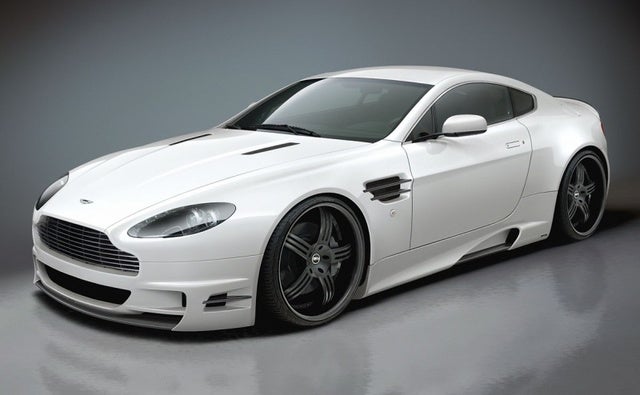 BBC’s Top Gear created a whole separate category for the Aston Martin V8 Vantage, finding it “too cool” for even top honors on its “coolness” rating scale. Car Design News rated it the best current production design in 2006. So what’s a car manufacturer to do, freshly freed from the reins of FoMoCo?

Make it even better, obviously.

So, for 2009 the V8 Vantage includes a host of improvements to what has already been called one of the most attractive and potentially iconic cars of all time. Available as a coupe or a roadster, this rear-wheel-drive luxury sports car has a front mid-mounted engine with a rear-mounted transaxle, allowing for a weight distribution that is actually biased slightly toward the rear - impressive for a front-engine, rear-drive coupe.

Aston Martin currently works under the philosophy that a car doesn’t need to be visually refreshed every few years, rather the best method is to take a winning design and improve it subtly over the years, a slow evolution of perfection. Darwin would be proud. The Vantage’s formidable V8 has been bored and stroked for an extra 2mm, with thinner pressed-in liners for the cylinder walls, as opposed to the cast-in versions used previously. This has increased displacement from 4.3 liters to 4.7 and accounts for an 11 and 15 percent increase in horsepower and torque, respectively. New forged-steel connecting rods and crankshaft also grace the engine, with the latter receiving holed counter-weights for less rotating mass. Cast aluminum pistons are also new, further saving weight and heat retention. The intake manifold and cylinder heads have also been modified, adding a new intake port and bigger inlet valves, as well as a redesigned dry sump oil pump with a new sump casting. This has pushed hp numbers to 420, and torque is an equally impressive 347, enough to push the Vantage to 60 mph in 4.7 seconds, and if you keep on it, it’ll take you all the way to 180 mph.

The automatic transmission has received new software, and both manual and automatic six-speeds have received an upgraded clutch and flywheel, all to help deal with the increase in power. Bilstein shocks now govern the Vantage’s road manners, resulting in a ride that is 11% firmer in the front and 5% firmer in the rear. Steering has received attention as well, with stiffer bushings and a revised geometry for even more responsiveness. If that’s not aggressive enough, an optional Sports Pack will get you even stiffer Bilstein shocks and lighter 19-inch five-spoke wheels, as well as a larger rear anti-roll bar for the coupe. Non-Sports Pack Vantages also get redesigned wheels for 2009.

Otherwise, the Vantage remains unchanged outside - as it should be.

Have you driven a 2009 Aston Martin V8 Vantage?
Rank This Car

Are There Inspection Services?

Are there independent companies I can hire to inspect a vehicle before purchasing? I live more than 1500 miles from a car I am interested in buying and would like to hire a company to give me a thi...