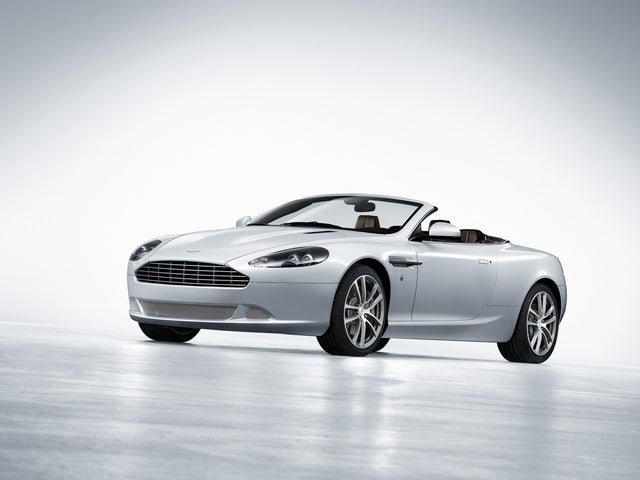 One of the world's rarefied sports cars, the Aston Martin DB9 debuted in 2004 and remains one of the British automaker's signature models. For 2009, the 2+2 DB9 gains a more powerful engine, a freshened exterior, and an upgraded chassis, which improves ride quality and enhances the car's sporty feel. The '09 DB9 comes in Coupe and Volante convertible trims, both of which are still hand-made at Aston Martin's state-of-the-art facility in Gaydon, Warwickshire, England.

Aside from its big V12 powerplant, the DB9's most distinguishing feature remains its sleek exterior design, which flows gracefully from the elongated nose through the sweeping roofline to the bold, curvy tail. Key design features include an updated, anodized aluminum five-bar grille, which immediately identifies the car as an Aston Martin, as well as side metal strakes and the uniquely shaped rear window, another distinctive Aston Martin feature. Other updates for 2009 include new exterior mirrors and new standard 19-inch, 10-spoke alloy wheels with Bridgestone Potenza tires.

At the heart of the '09 DB9 resides a beefy V12 engine that produces 470 hp, an increase of 20 hp over the previous year's engine. The V12 generates an impressive 443 lb-ft of torque at 5,000 rpm, capable of rocketing the DB9 from 0 to 60 in 4.6 seconds and to a top speed of 190 mph. The engine links to either a six-speed manual gearbox or a six-speed Touchtronic 2 automatic transmission designed for quicker shifts. Both transmissions are mid-mounted in the chassis.

Inside, the '09 Aston Martin DB9 comes outfitted with a new center console made from die-cast zinc with a painted iridium silver finish. In addition, the DB9 gets a new ignition device called the Emotion Control Unit, or ECU. Replacing a traditional car key, the ECU, which first appeared in the Aston Martin DBS, is made from glass, polished stainless steel, and polycarbonate, and fits into a docking station in the center of the dashboard. Once the ECU is inserted, the driver pushes and holds a clear glass button for a few seconds to start the DB9's engine.

Other interior features include extensive use of leather for the seating, side panels, and trim. All leather is cut, fitted, and finished by hand. The same holds true for the wood trim, available in maple, mahogany, bamboo, tamo ash, and piano black, all crafted using only large pieces rather than strips. The dashboard, instrument panel, center console, and door handles make extensive use of aluminum for a classic feel.

A 700-watt audio system with Dolby Pro Logic II, fiber-optic electronics, a 6-CD changer, and connectivity for MP3 players comes standard. Bluetooth wireless mobile-phone connectivity and a navigation system with a display screen and hard disk drive are among the DB9's other features.

Have you driven a 2009 Aston Martin DB9?
Rank This Car

i drove the car on sunday then monday it would not start battery has been charged but still will not start..