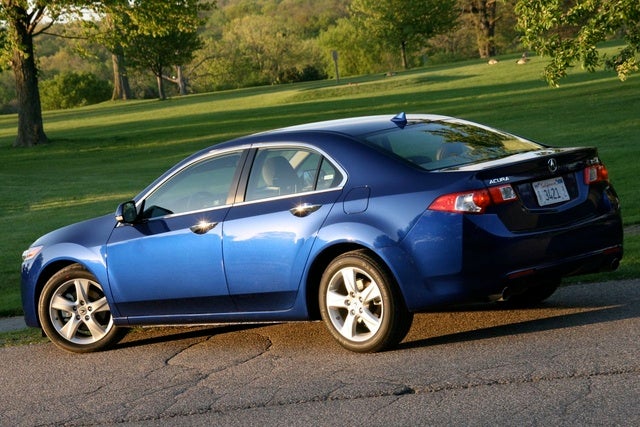 Power and performance in the '09 Acura TSX lag behind those of comparably priced sport sedans, and the numb power steering lacks any kind of driver feedback. 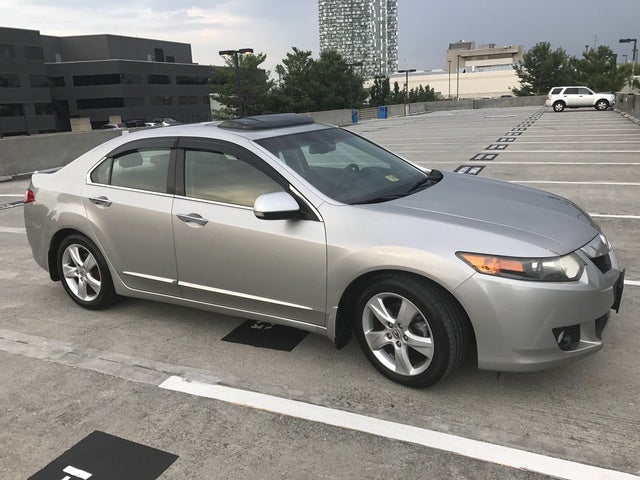 Offering just enough sportiness to satisfy the average everyday driver, the 2009 TSX will never be confused with the sportier European imports, but does offer an ideal blend of upscale comfort and superior driving dynamics, all guaranteed by the reliability that goes along with the Acura name. Updates this year have improved handling, but done little else to distinguish the TSX from other sedans in its class. Boasting an array of state-of-the-art technology, a luxury cabin, and the oft-overlooked but very important strong safety profile, the '09 TSX works well for small families willing to pay a bit more for creature comforts or single drivers who like to let loose – but only a little – on the weekends.

The 2009 TSX gets bigger, meaner-looking, and more technologically equipped this year. Acura's entry-level offering in this segment, the front-wheel-drive premium sports sedan leans more toward luxury than performance, but has enough zip and energy on the road to suit drivers looking for a little pizazz in their commuter sedan. While not as refined or powerful as most European sport sedans, the '09 TSX does exhibit superior handling, but some may find its looks and powerplant too similar to the less-expensive and larger Honda Accord. In an attempt to distinguish itself from its respectable but conservative cousin, the TSX shakes things up a bit both inside and out.

Updates for 2009 include a stronger chassis and a longer and wider wheelbase for improved handling dynamics. On the outside, the TSX gets more pronounced wheel wells and an RL-inspired double-plenum smiling front grille. Revisions to the A, B, and C pillars improve visibility and increase sound dampening for a quieter, more upscale ride. Tweaks to its four-cylinder engine increase torque over a broader power range and help it earn a ULEV-compatibility rating. Also on hand is the new Advanced Compatibility Engineering system, which reduces frontal bumper impact in collisions. On the inside, a new center console design boasts faux chrome trim, and Bluetooth joins the list of standard equipment. The optional navigation system now features voice recognition and adds more capabilities.

The TSX comes in one trim only, available with either a manual or automatic transmission. On its own, the sedan is fully equipped with all the latest high-end features, and a much-loved optional Technology Package extends the equipment even further. Those looking for the perfect blend of fuel efficiency, luxury comfort, a quality build, and top-notch handling will find all their needs met in the 2009 TSX. Those who prefer power over presentation will want to look elsewhere. 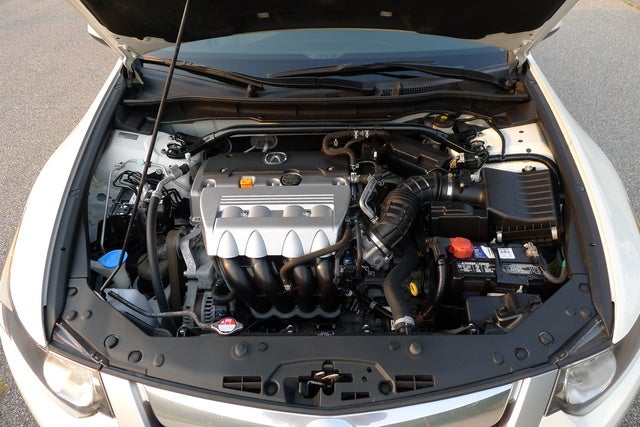 The 2009 TSX keeps its 2.4-liter i-VTEC four-cylinder engine, but fiddles with the intake and exhaust systems and valve timing and raises the compression ratio. These revisions translate to a wide power range distribution, with an emphasis on greater low- to midrange power. The retooling drops horsepower from 205 to 201, which might disappoint owners of previous models of the TSX who begged for extra punch in this sport sedan. Some compensation can be found in the torque boost to 172 lb-ft at 4,400 RPM.

The TSX averages 22/30 mpg, which ranks rather high for a performance sedan, and most owners cite its fuel economy as a top highlight of the TSX, while critics think Acura could do better. For 2009, this engine now meets the ULEV low emission standards of the EPA. The downside of all this is a premium gas requirement.

A standard close-ratio six-speed manual can be replaced with an optional five-speed Sportshift automatic, controlled by new paddle shifters on the wheel. Critics and owners prefer the manual to the automatic, calling it smooth as silk and able to maximize both engine output and the fun factor in the driving experience. With 0-60 times of 6.6 seconds, the 2009 TSX won't classify as a speed demon, and comparable German sports sedans offer much more power without sacrificing too much fuel economy, but the four-cylinder certainly delivers enough satisfying power for the everyday driver interested more in a quality luxury ride than performance-oriented high-speed cornering.

Many of the improvements made to the '09 Acura TSX focus on handling and maneuverability, with the intent to make the sedan sportier and tauter. The wheelbase has grown by 1.3 inches and the width of the sedan by 3 inches, in an effort to increase stability, minimize body roll, and widen interior passenger space. In this instance, the TSX is successful, delivering tight cornering at high speeds with limited body lean and good stability. Test drivers and actual owners find the handling sprightly, yet controlled, exhibiting a firm and confident grip on the road.

Stability is also enhanced by a stronger chassis, backed up by cross-brace reinforcements, a larger rear bulkhead, and integrated frame rails. Despite the use of lightweight high-strength steel in the body, however, the weight of the '09 TSX is up by 160 pounds, which detracts from any true sport pretensions. The four-cylinder engine, while exciting in everyday situations, is far from exhilarating, and performance noticeably lags behind European sport sedans. The firm 4-wheel independent suspension generally feels smooth and even, although some drivers find it harsh on longer trips.

Another big detractor from the TSX's supposedly sporty personality is its numb and vague steering. New electric power steering adapts itself to the driving situation, offering a lighter touch on city streets and a more weighty feel at higher speeds. Though some critics find the system responsive and intuitive, most reviewers and drivers prefer the old hydraulic system. The new steering delivers little to no feedback – not a good thing if you're selling yourself as an entry-level luxury sport sedan.

Road noise has been kept to a minimum, to emphasize the luxury aspect of the 2009 TSX. Part of this is due to revised A, B, and C pillars, as well as increased sound dampening materials. The result might please owners looking for quiet comfort, but some critics wish for a little more engine growl out of a supposed sport sedan.

Often considered a pricier Accord, the 2009 TSX takes its styling cues this year from the sleeker European version of the Accord, which means its dimensions are actually smaller than the North American Accord's. Although cabin space exceeds that found in the Volvo S40, the TSX measures 18 inches shorter than the more conservative Accord, and rear passengers feel the pinch, literally. While owners heap compliments on the comfortable, luxurious, and well appointed cabin, most of these people sit up front with 42.4 inches of legroom and standard power seats (8-way for the driver, 4-way for the passenger). Rear passengers get only 34.3 inches of legroom and around 37 inches of headroom. While the space fits adults, long car trips may prove uncomfortable.

Rear seats split-fold 60/40 onto a 12.6-cubic-foot trunk – small, but adequate for this size car. The cabin itself focuses on high-quality materials and technical gadgetry, and both critics and owners find the overall fit and finish to be elegant and understated. The soft leather seats provide good bolstering and passenger comfort, but the front passenger seat lacks the lumbar settings that the driver gets.

A new cockpit design up front features alloy trim and a plethora of buttons and dials, and critics miss the easier touchscreen from previous models. Replacing the touchscreen is an all-in-one knob that integrates many of the controls for the navigation and audio system, which some drivers say has a long learning curve. The screen for the navigation system also tends to wash out in sunlight, making it difficult to read. In general, controls lie within easy reach of the driver, and the steering wheel tilts and telescopes to improve driver comfort.

Bluetooth and a compass join the list of standard features in the 2009 TSX, a list that already boasts driver-pleasing gadgets. In fact, most owners say no other sport sedan offers as many features as the Acura for the same amount of money. The initial pricetag includes leather upholstery, heated front seats, automatic dual-zone climate control, cruise control, remote entry, tilt and telescopic steering, a power sunroof, and a 7-speaker sound system with CD/MP3 player, iPod jack, and satellite radio. Several owners rave about the sound system, which can be upgraded to a critically praised 10-speaker surround sound system with a 6-CD changer as part of the Technology Package. This popular bundle also adds a rearview camera and a revised voice-activated navigation system. The system features real-time weather and traffic, with a new rerouting function when roads are closed due to construction or accidents.

A rearview camera is optional in the Tech Package, and several owners find it helpful combating what they say is a rear visibility problem caused by a small rear window.

Owners of the 2009 TSX love that Acura packs a ton of standard features into this entry-level premium sedan without going overboard on the price. With or without the optional Tech Package, drivers find plenty of gadgets to occupy their time, with the top favorites being Bluetooth, the paddle shifters, the stellar sound system, and the easy-to-use navigation system. One owner says the TSX is built for lovers of technology rather than performance.

The other big hit with drivers is the fuel economy ratings, which average 24 mpg. While not mind-blowing, the engine offers enough spirited energy for the average driver, and owners say the manual transmission surpasses the automatic. A smooth ride, tight handling, comfortable seats, quiet cabin, and a quality build all rank as highlights of TSX ownership. The interior styling and luxury earn higher marks than the exterior.

Downsides depend on what you're looking for in a luxury sports car. If it's performance, many drivers seem disappointed with the lackluster engine power and light-touch steering. Luxury lovers despair about the small rear seat and trunk, some road noise at high speeds, the screen glare of the navigation system, and the fact that the dash layout takes a while to master.

Comments from CarGurus users about the 2008 model focus on elements that Acura addressed in the updated 2009 TSX, such as bland styling. Features that earned praise and that carry over into 2009 include Acura's reputation for reliability and resale value, solid build quality, a smooth and comfortable ride, fuel economy, and the multitude of gadgets. 2008 owners say you get a lot more equipment and performance power for not much more than you'd pay for a Honda Accord.

Have you driven a 2009 Acura TSX?
Rank This Car

I'm planning to buy an used car, i recently see this car, an Acura tsx with 200k, it have had 2 owners and the last owner was a woman, the interior is in excellent condition i have heard that checki...

Acura tsx '09 38k miles, i went in for maintenance yesterday, i was told i need 30k miles maintenance schedule. I was charged $529.76 total. My car was in running condition even before the check up....

In Very Cold And More Moisture Day My Very Tight To Drive. Very Hard To Mov...