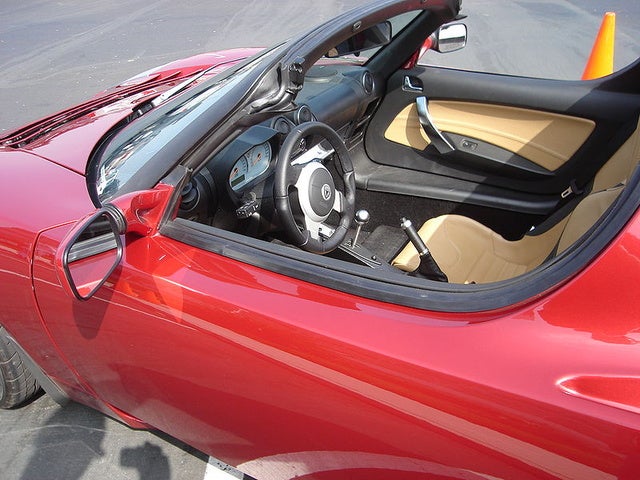 After years of anticipation, the electric-powered Tesla Roadster goes on sale in 2008 with very limited availability. Based in Menlo Park, Calif., Tesla Motors took several months to build its first few cars, but plans to ramp up production to build a total of 650 units in 2008. All cars come equipped with Tesla's air-cooled, 375-volt, three-phase electric motor, which produces 248 hp and 276 lb-ft of torque. Because the engine produces 100-percent torque 100 percent of the time, it generates a constant rush of power, driving the car from 0 to 60 in just 3.9 seconds. That puts it on par with some of the fastest-accelerating cars in the world, including cars from Ferrari, Lamborghini, and Porsche.

The Tesla Roadster's engine links to a lithium-ion battery pack made up of 6,831 individual batteries in an aluminum enclosure. The Tesla will run between 170 and 256 miles on a single charge, depending on how hard the car is driven, and averages about 227 miles on a charge, according to EPA testing. Drivers can fully charge the Tesla's battery in as little as 3.5 hours using a High Power Connector, which comes as standard equipment. The automaker also offers an optional Mobile Connector, which drivers can use on the road to charge the Roadster by connecting it to any standard 110-volt or 220-volt electrical outlet. Drivers can charge the Tesla for as little as 2 cents a mile, using off-peak charging rates, according to the automaker.

In early production units of the Tesla Roadster, the electric motor linked to a two-speed transmission, which had durability and longevity issues, so newer units come equipped with a one-speed transmission. The shifter actually has three positions - drive, reverse, and neutral.

Drivers should be aware that while the Tesla Roadster operates at peak performance at speeds up to about 70 miles per hour, its acceleration and responsiveness tend to degrade at higher speeds. The Tesla has a top speed of 125 mph (electronically limited), but it can maintain that speed for only a few minutes, according to reviewers, who note that after that period of time the Tesla settles into a cruising speed of about 105 mph.

The Tesla sits low to the ground, and seats two passengers. Its carbon-fiber body displays sleek aerodynamic lines. Front air ducts double as energy-absorbing zones, while the shoulder intake ducts incorporate touchpads, which are used to open the doors in place of traditional door handles. LED taillights are located in the oval-shaped rear end. The open-top, rear-wheel-drive Tesla comes with a double-insulated soft top as standard equipment. Drivers also can opt for an available color-matched carbon-fiber hard top.

The Lotus plant in the United Kingdom assembles most of the Tesla Roadster, with final assembly taking place at the Tesla factory in California. Although the Tesla shares a few common elements with the Lotus Elise, including its dashboard, front airbags, windshield, and some of the suspension, about 90 percent of the Tesla's design and components are original.

Like many high-end sports cars, such as Lotuses and some Ferraris, the Tesla Roadster has a stripped-down cabin, yet it comes with enough features to keep occupants comfortable. Heated sport seats with inflatable lumbar support, a leather-wrapped MOMO sport steering wheel, air-conditioning, cruise control, and power windows and door locks all come standard. Other features include an electric air conditioner and heater, and an audio system with a single-CD player, iPod interface, and MP3 playback. Antilock brakes and traction control are also included on the standard equipment list.

The Tesla's electric motor operates almost silently, which takes some getting used to, especially for those used to the throaty exhaust notes of other high-end sports cars. In addition, with the engine running in almost silent operation, road noise becomes pronounced, according to drivers and reviewers. Owners report adequate legroom, but offer warnings when exiting the car due to its low profile, which can make it tricky to get your feet under you. The Tesla Roadster comes equipped with a a touchscreen engine information display, which is located below and to the left of the steering wheel, which sometimes can make it inconvenient to view. One of the Tesla Roadster's few real downsides, owners note, is its hefty price tag.

What's your take on the 2008 Tesla Roadster?

Have you driven a 2008 Tesla Roadster?
Rank This Car