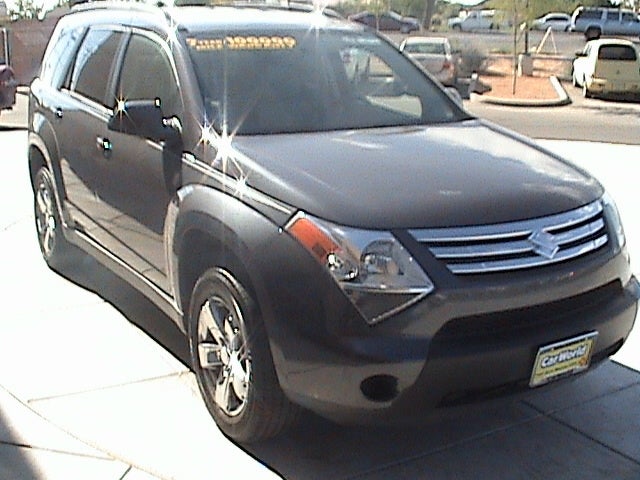 Although it's not as big a player in the midsize SUV market as many of its more-popular competitors, the 2008 Suzuki XL-7's long-term transferable warranty and budget pricing appeal to families. The '08 XL-7 is Suzuki's largest crossover SUV, available in either front-wheel or on-demand all-wheel drive, with either two or three rows of seating. After a major overhaul last year, this year's version receives minor changes, most notably a less-expensive Base model and standard remote start (which also starts the climate control and heated seats), as well as a navigation system in the Limited and a standard sunroof in the Luxury trim.

Four trims are available for the 2008 Suzuki XL-7. The Base trim is nicely equipped with power features and a CD player, but comes only in two-row, five-passenger form and only in front-wheel drive. Mid-range Premium and Luxury trims add rear climate control, heated power seats, and leather upholstery, and are available with either two or three rows. The top-of-the-line Limited adds a navigation system, foglights, larger wheels, and a rear spoiler. It is only offered in the three-row, seven-passenger configuration. A new option this year for the Limited is a rearview camera. All trims earn five stars in crash tests and are outfitted with four-wheel ABS brakes, traction and stability control, rollover sensors, and dual front and side curtain airbags for each row. There is only one engine choice â?? a 3.6-liter, 252-hp V6 with variable valve timing. It's matched to a five-speed shiftable automatic transmission.

The XL-7's second row split-folds and tumbles 60/40, and in seven-passenger models the third row splits 50/50 and folds flat. With both rows down, the '08 XL-7 holds 95 cubic feet. The third row drastically cuts down on cargo space when up, from 49 cubic feet in the 5-passenger model to only 14 cubic feet. Another nice feature is a flat-folding front passenger seat, if you need to fit long objects. A roof rack is standard, and the midsize SUV is rated to tow 3,500 pounds. A decent price and a long list of convenience features makes the 2008 XL-7 attractive to families on a budget. Owners say the engine is powerful and smooth, though it can be noisy. No off-road capability, a cramped third row, and blind spots are downsides.

James D All about being the very best!

Fuel Gauge Does Not Go Beyond Half Tank On 2007 Xl7

This should be recalled and fixed by the dealership. I know they don't make them anymore but there should be something that the consumer would be able to do. Along with their timing chain and belt ...

time belt change how much for parts and labor