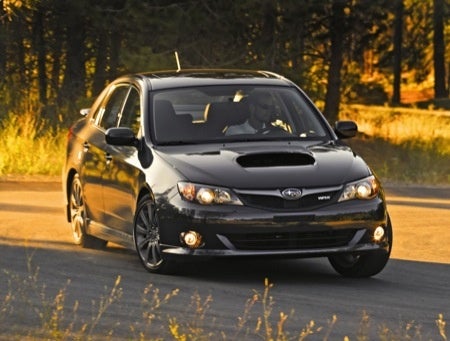 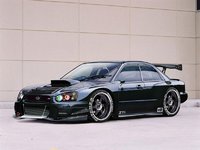 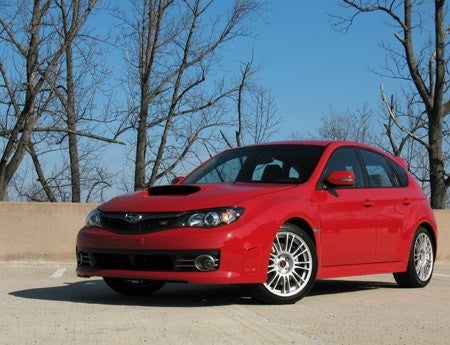 Debuting at the New York Auto Show, the 2008 Subaru Impreza WRX STi introduces a new 5-door hatchback version of its rally racer, alongside its four-door sedan. Both models are still over the top, with an enormous rear wing (yes, even on the hatchback), large hood scoop, and choice of silver or gold wheels. All of the Impreza models get a longer wheelbase this year, to improve on interior room, but the hatchback's will be just under 1.7 inches shorter than the sedan, which adds 4.9 inches to its wheelbase.

The same 2.5-liter turbo charged boxer 4 engine hits 300-hp in the 2008 Impreza WRX STi, matched to a 6-speed manual. The suspension and chassis are made firmer this year and the engine placed lower in all WRX models to improve stability and performance. The new STi hatch gets the airplane-style front grille Subaru recently introduced. AWD is still standard in this sports car, with a 35/65 bias towards rear-wheel drive, which can be either automatically or manually adjusted.

Early comments on the new hatchback's looks are mixed, with some saying that the giant spoiler doesn't look right on a wagon. But Subaru seems to want to capitalize on the rejuvenated interest in the versatility of hatchbacks, while still offering road-burning power and performance.

What's your take on the 2008 Subaru Impreza WRX STI?

Have you driven a 2008 Subaru Impreza WRX STI?
Rank This Car

Hi, can I combine 3 car remotes into 1 controller so that I don't have to carry 3 sets of keys?

Hi there, I need to purchase some snow tires for my WRX. Any recommendations out there? Thanks

how much horsepower does the 2008 subaru impreza wrx sti have?

Is the high type rear spoiler as shown in the photo for 2008 hatchback model S-GT available yet? Where can I get it?