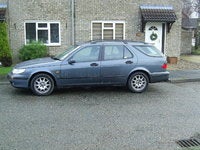 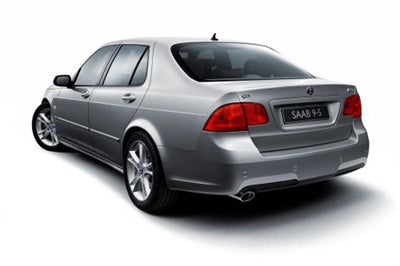 Following Saab's jet airplane analogy, which the automaker frequently uses to describe the design of its cars, we'll refer to the 2008 Saab 9-5 as in a holding pattern. Since its introduction for the 1999 model year, the 9-5 has retained the same basic exterior and interior design, although it did receive a minor design refresh in 2006. And with a full redesign scheduled for 2009 (or perhaps even 2010), the '08 version of the 9-5 changes little from the previous year.

Fortunately, the 2008 9-5, while not cutting edge, doesn't seem too dated. Available in a single trim, the 2.3T, the 9-5 features aerodynamic headlights, a three-port front grille, and clean, simple lines. A 260-horsepower, 2.3-liter turbocharged four-cylinder engine drives the 9-5, though some critics note that the engine's exhaust note fails to inspire. Still, the engine moves the sedan along quickly enough, with decent fuel economy. The engine links to either a five-speed manual shifter or an optional five-speed Sentronic automatic transmission.

Despite the lack of a fresh design, the 9-5 comes nicely equipped with such features as a power moonroof, leather-appointed seats that are heated in the front, a six-disc in-dash CD player, dual-zone automatic climate control, XM satellite radio, and OnStar.

Two other features might make the 9-5 an attractive purchase for car shoppers. A 100,000-mile warranty inspires confidence in the vehicle's quality, while no-charge scheduled maintenance for the first three years or 36,000 miles certainly adds a nice bonus.

The 9-5 also excels in safety features, with active head restraints, a full range of air bags, and traction and stability control. In addition, the 9-5 has done very well in government crash testing in past years.

When I Look Up The Make And Model Of My Car I Can't Find It On The Site. Di...

I can't find it on the site. did my for sale ad not publish? thx paula

How Do I Get In Touch With The Dealership That Selling The Car In ...

The brake warning dash indicator, both visual and audible, toggles on and off at various frequencies. The owners manual suggests that the alarm indicates that the master cylinder reservoir is low on f...

628 views with no answers yet