Much ado was made in July 2008, when Opel introduced its newest entry into the midsize sedan market, the 2008 Opel Insignia. This outrageously stylish sedan replaces the aging-but-venerable Vectra, and a large part of the hullaballoo concerns the fact that the Opel Insignia is slated to be branded in the U.S. as the next-generation Saturn Aura. The Aura is, of course, presently based, at least in part, on the Vectra design.

The five-passenger ’08 Opel Insignia is offered with an array of engine selections, two transmission choices, and the option of full-time front-wheel drive or adaptive all-wheel drive. Additionally, a wagon, the Insignia Sports Tourer, promising an even roomier cabin as well as a significant increase in cargo space, is due to join the midsize Insignia sedan before the end of the model year.

The ’08 Opel Insignia offers a plethora of engines that includes four gasoline and three turbodiesel options. Engine choices range from a 1.6-liter, 115-hp inline four-cylinder (I4) gasoline engine to a 256-hp, 2.8-liter turbocharged gas-powered V6 to a 2.0-liter I4 turbodiesel that puts out some 160 hp and nearly 250 lb-ft of torque. All these engines are available with either a six-speed manual or six-speed automatic transmission.

A completely reworked suspension for the ’08 Opel Insignia, built around GM’s highly regarded Epsilon II chassis, features the cutting-edge FlexRide design. This FlexRide technology allows drivers of the Insignia to select one of 11 different handling modes, depending on road conditions, traffic, terrain, etc. Over-the-top steering and braking systems, combined with Insignia’s super-adaptable FlexRide design, should be enough to make Japanese carmakers weep and German titans scramble to stay a step ahead.

The cabin of the 2008 Opel Insignia has been described as a marvel of design and workmanship, far more elegant, comfortable, and understated than that in many of Europe’s more luxurious – and more expensive – sedans. No cumbersome switches and unsightly levers, characteristic of most U.S. dashboards and instrument panels, clutter the ‘08 Insignia. Should the Insignia indeed be wedded with the Saturn Aura, the hope is that the Aura will retain at least a modicum of the Insignia’s interior and exterior Euro-elegance.

Have you driven a 2008 Opel Insignia?
Rank This Car 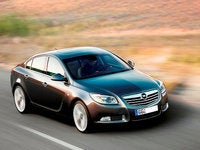