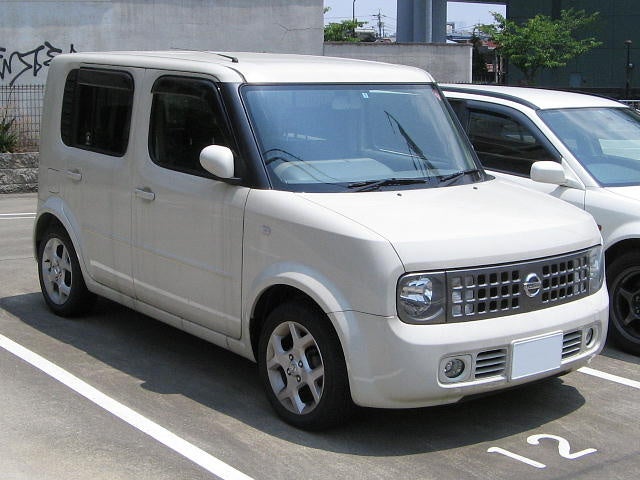 The 2008 Nissan Cube is a five-passenger, five-door, front-wheel-drive subcompact hatchback that’s long on cargo space and visibility, but short on handling, highway performance, and creature comforts. Resembling Toyota’s Scion xB, the Cube prototype, developed in the mid-to-late 1990s, actually pre-dates the xB by a year or so.

The ’08 Cube boasts a 1.4-liter four-cylinder engine capable of 95 hp at 5,600 rpm and 100 lb-ft of torque at 3,200 rpm. A column-mounted four-speed automatic is the sole transmission available for the 2008 Nissan Cube, and it seems to hold onto second gear for some time. With a 0–60 time of nearly 14 seconds, passing and merging on the highway will require the planning of a space mission. As for hills - bring a good book. The Cube doesn’t even offer appealing mileage figures, with an estimated 22.7 mpg average.

The ’08 Nissan Cube does, however, offer one interesting twist: A small electric motor, powered off the car’s electrical system, provides some low-speed drive traction to the rear wheels, thus providing a modicum of four-wheel drive capability in a pinch. The motor must be manually switched on for use and then switched off again before getting up to travel speed.

The lack of power and performance in the ’08 Cube is complimented by a “comfort-tuned suspension” and 15-inch wheels that provide about as much driving excitement and stability as a paddle-boat in a heavy chop. Decent brakes, however, bring the Cube to a halt from 60 mph in 120 feet with little pulse or mushiness. Front-end dive, however, might be a bit unnerving.

So why is this underpowered hatchback so popular in Japan? The ’08 Cube’s tiny footprint makes it a breeze to maneuver in crowded parking spaces, and once a sliver of daylight is found, even easier to park. Additionally, the traffic congestion in Japanese cities, where creeping is the norm, lends itself to small engines and four-speed automatics.

Cabin headroom in the 2008 Nissan Cube is decent enough, though limited seat travel, front and rear, crimps legroom. Shoulder room also leaves a lot to be desired, but the Cube does offer 16.7 cubic feet of cargo room behind the rear seats, enough to stand an armchair upright. A sunroof is optional for the Cube in ’08, as is automatic climate control and keyless start. Curiously, no audio system of any kind is offered with the ’08 Cube.

Four-wheel ABS (front-disc, rear-drum) and front airbags seem to be the only standard safety features offered with the 2008 Nissan Cube. Stability control, traction control, and side/side curtain airbags are not even offered as options.

Users ranked 2008 Nissan Cube against other cars which they drove/owned. Each ranking was based on 9 categories. Here is the summary of top rankings.

Have you driven a 2008 Nissan Cube?
Rank This Car

The Engine Stops Nissan Cube 2008 When I Turn On The Ari Conditioning Unit....