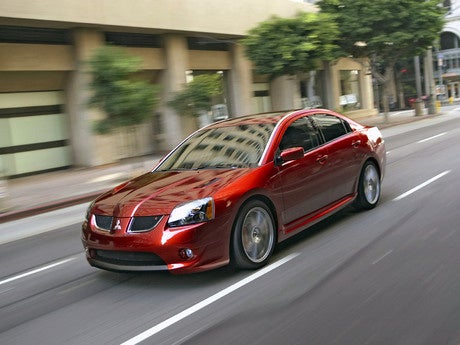 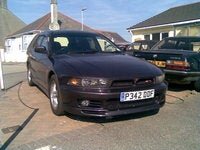 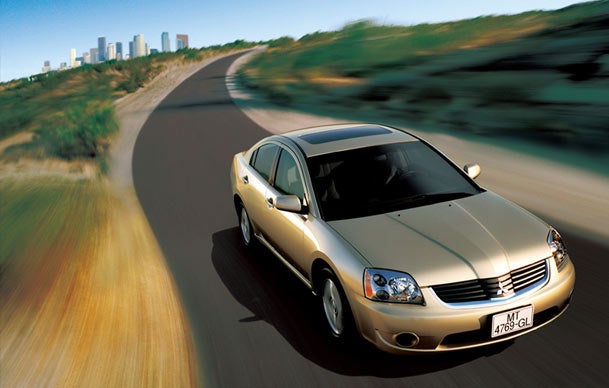 The value-oriented midsize 2008 Mitsubishi Galant sedan drops its GTS trim and 230-hp V6 this year, leaving only the base DE, ES, and sporty Ralliart trims in the lineup. Still chugging along after all these years, the Galant offers a lot of standard features, often at a lower price than competitors, and the performance-oriented Ralliart actually boosts the fun quotient behind the wheel.

The front-wheel-drive Galant sedan gets a new standard tire pressure monitor on all trims for 2008. Dual front-side and side curtain airbags are also standard. ABS comes with the ES and Ralliart, and traction control is standard on the Ralliart. The standard engine on the DE and ES is a 2.4-liter, 160-hp inline four-cylinder with a 4-speed shiftable automatic. The DE offers power features, remote entry, and a CD player, while the ES adds cruise control, alloy interior trim, and body-colored bumpers. If you're looking for a little pep in your daily commute, the Ralliart packs a 258-hp, 3.8-liter V6 and a 5-speed shiftable automatic that hit 0-60 in seven seconds. A sport-tuned suspension, larger brakes, and larger 18-inch wheels improve road feel. The Ralliart also sports special badging, power leather seats, an upgraded sound system, and a sunroof. Unfortunately, it also gets worse mileage - 18/27 mpg, compared to the inline four's 23/30 estimates.

Although the 2008 Galant has mostly slid in under the radar, the majority of owners are quite pleased with their roomy sedan. Fuel economy is a highlight, but that gets sacrificed for the V6's better engine power. Handling, a solid transmission, and a smooth ride also rank high. The lack of split-folding rear seats can be annoying (there is a trunk pass-through), and Ralliart drivers wish for a 6-speed manual.

What's your take on the 2008 Mitsubishi Galant?

Have you driven a 2008 Mitsubishi Galant?
Rank This Car

I Have A 2008 Galant. I Have Replaced The Battery And Alternator. Now My Ba...

I replaced the battery last month and the alternator a few months before that. This car acts very strange when things are about to go out. Also my clock in the top center of the dash the light quit, ...

Mitshubishi gallant, i was changing my battery and unfortunately the socket fell in front of battery. In front of battery LH side there is a small box like structre with few holes, went into one of...

14 views with 9 answers (last answer about a year ago)

My car shuts off when Im at a stop sign or red light.

106 views with 2 answers (last answer about a year ago)

I'm trying to install an aux cable to my mitsubishi galant 2008. I recently learned that holding down the CD button is a good way to check if your car is aux capable. I did that but nothing came up,...