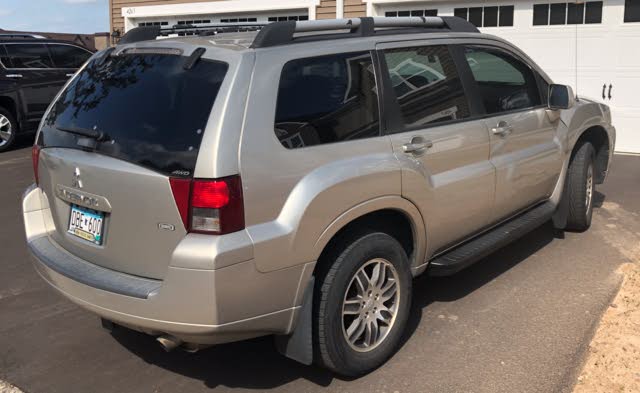 Introduced in 2004, the Mitsubishi Endeavor was a hit when it debuted. For 2008, traction control has become standard, along with some minor trim-level changes. Reviewers like the Endeavor, but feel that Mitsubishi has let time stand still with this model, and its competitors - Ford Edge, Mazda CX-7, Hyundai Santa Fe, and the standbys, the Honda Pilot and Nissan Murano - have not.

The only engine is a low-horsepower (225) but high-torque (250 pound-feet) 3.8-liter V6 that transmits power through an "old-fashioned" four-speed automatic transmission. Reviewers, however, were constantly surprised at the performance of this "antiquated" powertrain. 0-60 comes up in a respectable 7.6 seconds, faster than the more-powerful Honda Pilot. Other reviews found the "old" four-speed automatic smooth and well-behaved. The manual shifting capability allowed reviewers to force downshifts when the automatic mode hesitated. The downside, however, comes at the gas pump, with the EPA estimating mileage of 15/22 mpg city/highway for the front-wheel driver and 15/19 mph for the all-wheel-drive trim. The competition has moved on.

Handling is "well-behaved" for this class of car-based SUV. Mitsubishi builds the Endeavor on the same architecture it uses for the Galant sedan, Eclipse coupe, and Spyder convertible. Of course, the extra height of an SUV means it's bound to lean a little, but it's not excessive, and the overall ride is comfortable. While not a true off-roader, it performs above average on mildly rutted dirt roads. Steering, although slow for some reviewers, was rated as well-balanced for everyday driving. The brakes have good stopping control.

The Endeavor's cabin found favor with reviewers, who deemed it spacious and comfortable. The rear seats have ample room for two heads and four legs, though three adults will have to squeeze to fit back there. One of the major criticisms leveled at the Endeavor is its lack of third-row seating - something most of the competition flaunts. Another problem is the lack of cargo space, given the Endeavor's larger dimensions than its rivals. Maximum cargo capacity is 76.4 cubic feet, much less than the Honda Pilot and Ford Explorer offer.

Safety is a strong point, as the Endeavor has received the highest crash-test ratings. Along with traction control, Endeavors come equipped with dual-stage front airbags, front-seat-mounted side airbags, and side head curtain airbags, which remain inflated after a rollover accident.

What's your take on the 2008 Mitsubishi Endeavor?

Have you driven a 2008 Mitsubishi Endeavor?
Rank This Car

Where Is The Tension Bolt Located

I have a 08 Mitsubishi endeavor and I was replacing the alternator and i can't find the tension bolt to release the tension on the belt does anyone no where's it located and what it looks like I a...

sounds like a faint jet engine whine/whistle. It's hardly noticeable when you first start driving, but it slowly gets louder the longer you go, in which case you can notice it pretty easily. It is MOS...

SUV has 54000 miles - have never used my sunroof and keep the cover pulled. Appeard that sunroof does not completely close but dealer said it was okay. Went thru a car wash that just sprays (no brus...

Have A 2008 Mitsubishi Endeavor. Tail Lighs Not Working, Fuses Are Good An...

I noticed that there were no dash lights, checked and of course no tail lights. Checked the fuses, none were broken or bad, and have the correct size fuse. Also checked the bulbs and they are good. ...

I have wet floor boards on the passenger side. Keeps getting worse especially when I have the defrost on.