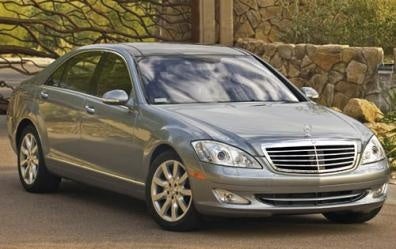 With its shapely styling, aggressive performance, and top-notch interior features, the 2008 Mercedes-Benz S-Class continues to set the pace for high-end luxury sedans. Other than the addition of satellite radio as a standard feature for '08, the S-Class remains unchanged from the previous year. Still, Mercedes' flagship S-Class sedans have plenty to offer, including a choice of powerful V8 or V12 engines, available 4Matic all-wheel drive, the latest technologies, cutting-edge safety features, and richly appointed cabins with plenty of leather and wood trim.

The 2008 S-Class lineup consists of S550, S600, S63 AMG, and S65 AMG trims. All S-Class sedans seat five passengers and feature rear-wheel drive, except for trims equipped with the optional 4Matic all-wheel-drive system. The S-Class sedans deliver a superior ride and quick, responsive handling, thanks to their specially designed suspensions. The S550 comes equipped with an Airmatic Semi-Active Air Suspension system with Adaptive Damping, which automatically adjusts the air springs to ensure optimal ride and handling, and lowers ride height at higher speeds to improve aerodynamics and fuel efficiency. The S600, S63 AMG, and S65 AMG replace the Airmatic system with an Active Body Control system, which adjusts the suspension at each wheel to reduce vibration, dive, and squat, and uses a series of sensors and high-pressure hydraulics to minimize body roll during cornering.

When it comes to power and performance, the '09 S-Class sedans excel. A 5.5-liter V8 engine, generating 382 hp and 391 lb-ft of torque, powers the S550, which jumps out from 0 to 60 in 5.4 seconds. The engine links to a seven-speed automatic transmission with the Touch Shift manual shift feature and posts fuel economy numbers of 14/22 mpg. Moving up a notch, the S600 sedan pumps out the power with its 510-hp, 5.5-liter V12 bi-turbo engine. Generating an impressive 612 lb-ft of torque, the V12 drives the sedan from 0 to 60 in 4.5 seconds. It links to a five-speed transmission, and posts fuel economy numbers of 11/17, according to EPA estimates.

The AMG trims feature equally impressive powerplants. A 512-hp, 6.3-liter V8 engine, delivering 512 hp and 465 lb-ft of torque, powers the S63. The engine links to an AMG Speedshift Plus seven-speed automatic transmission with F1-inspired shift paddles, and drives the sedan from 0 to 60 in 4.5 seconds. The EPA estimates fuel economy numbers at 11/17. At the top of the lineup, the S65 AMG retains its 604-hp, bi-turbo 6.0-liter V12, making it one of the most powerful sedans available today. The V12 produces a whopping 738 lb-ft of torque, which propels the S65 AMG from 0 to 60 in just over 4 seconds. Like the V12-powered S600, the S65 comes equipped with a specially designed five-speed automatic transmission equipped with paddle shifters for manual shifting. The S65 posts fuel economy numbers of 11/17.

What's your take on the 2008 Mercedes-Benz S-Class?

GuruD4ZMS one of the best cars ever made (buy DD)

Users ranked 2008 Mercedes-Benz S-Class against other cars which they drove/owned. Each ranking was based on 9 categories. Here is the summary of top rankings.

Have you driven a 2008 Mercedes-Benz S-Class?
Rank This Car

Mr. asked a 2008 Mercedes-Benz S-Class S AMG 63 General question about a year ago

How Long Is Quote Good For

how long is quote good for...insurance hit me for more than i expected and have to get money this week

I gave a potential buyer my phone # and the site did not send the message and deleted the contact information. He was going to buy my car and I wanted him to text me when he started his 3 hour drive t...

Similar Problem With The Rev And Gas Padel

My concern is still driveable till I get it fixed

Can anyone tell me what these wires are from?