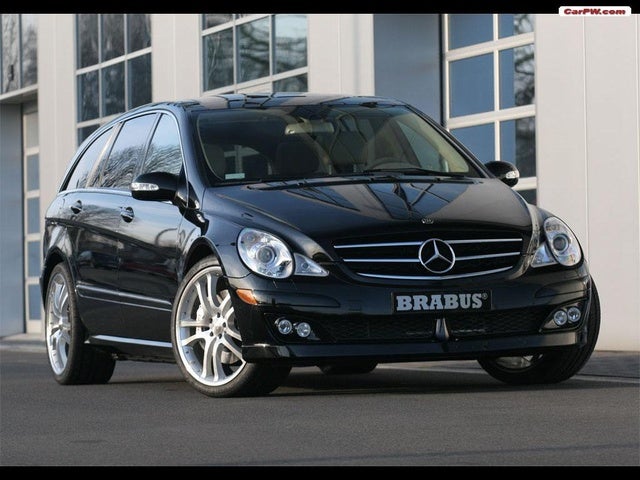 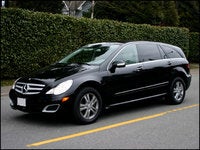 The Mercedes-Benz R-Class crossover SUV receives a number of styling updates for 2008, thanks to AMG, Mercedes' in-house high-performance tuner. All R-Class trims also receive 18-inch wheels for 2008. In addition, the automaker debuts an entry-level R350 rear-wheel-drive R-Class trim, providing an option for drivers who don't require a vehicle with full-time all-wheel drive. Finally, Mercedes drops the high-performance R500 and R63 AMG trims from the lineup.

The four-door R-Class "grand sport tourer," as Mercedes calls it, combines the ride and handling of a sport sedan with the functionality of an SUV. It rides on the same platform as the M-Class, although the R-Class features a much more streamlined, swept-back design than a typical SUV. The R-Class can seat up to six passengers (seven with an optional seat), and offers up to 85 cubic feet of storage space with the second- and third-row seats folded down. Owners can access the rear cargo compartment via a top-hinged tailgate.

In addition to the new R350 trim, the R-Class lineup for 2008 includes the R350 4MATIC, which comes equipped with Mercedes' 4MATIC all-wheel-drive system, and the diesel-powered R320 CDI 4MATIC, also equipped with all-wheel drive. The AMG styling bodykit, added to all R-Class trims for 2008, includes a unique front fascia and sporty side skirts, among other features. Other standard exterior features include halogen headlights, front foglights, heated side mirrors, and dual chrome exhaust tips.

A 3.5-liter, double-overhead-cam V6 engine producing 268 hp and 258 lb-ft of torque powers the R350 and R350 4MATIC trims. The V6 features continually variable timing, which helps improve responsiveness and acceleration, according to Mercedes. The R320 CDI retains its 3.0-liter turbodiesel V6 engine, which generates 215 hp and 298 lb-ft of torque. Due to emissions regulations, the R320 CDI is not offered for sale in certain states, including California, New York, and New Jersey. In all trims, the engines link to a seven-speed automatic transmission with the manual-shift Touch Shift feature.

What's your take on the 2008 Mercedes-Benz R-Class?

Have you driven a 2008 Mercedes-Benz R-Class?
Rank This Car

Check engine light on. Checked it on a code reader. It said "spark plugs " 1- 6. CHANGED them AND coils also. Light came on again! And again it said " spark plugs" 1-6. I figured give it time to ...

My 2008 mercedes R350 cranked and turned over but at a very low consumption, I tried putting my foot on the gas pedal but j it didn't do anything but died plus my battery went dead so I got a n...

HOW MUCH AM I PREQUALIFIED FOR

HOW MUCH IS PRE QUAL? AND THE LOAN AMONUNT?

I drive a Mercedes 350R Class. Lately the highway noise has been very loud. The noise is more of a loud hum that anything. No squeaking or grinding of any kind. Usually happens once I accelerate o...

2008 Mercedes Benz R350. Changed the cv axle three months back with an indy shop. After changing the axle what I am noticing is when I am on a uphill (even a small angle of 15% upwards), and when I ...