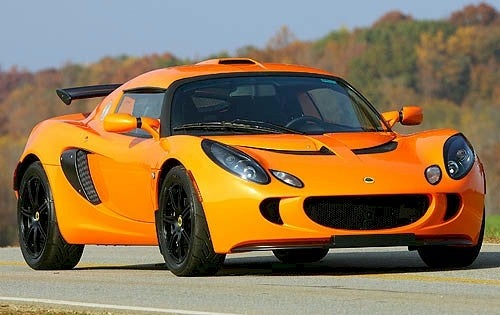 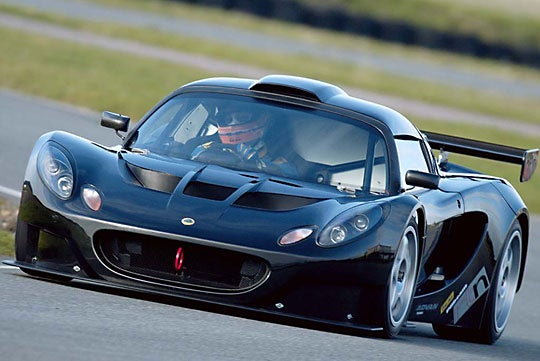 The 2007 Exige S carries over for 2008 with the addition of the new S 240 and a limited edition Club Racer. The non-supercharged base model is discontinued in the U.S. The Elise and the Exige (pronounced ex-seej, "challenging" in French), both first introduced in 2006, share an extruded aluminum frame and "a family resemblance." However, every Exige body panel, except the doors, is different from the Elise's.

The Exige S gets the same engine as the new Elise SC. Yamaha builds this 1.8-liter Toyota engine using its variable cam/valve technology. A Roots-type supercharger producing 7.3 psi of boost is added. Its intercooler mounts atop the engine, completely blocking the rear view, and an air scoop built into the Exige's fixed roof feeds it cool air. The engine spins out 218 hp at 8,000 rpm, with 80% of its maximum 156 lb-ft of torque produced at just over 2,000 rpm. Lotus gives a 4.1-second 0-60 time and 11 seconds for 0-100, with 150 mph as the car's top speed. Yet with all this performance, Lotus claims mileage of 20 mpg city/26 mpg highway.

The S 240 ups power to 240 hp and 170 lb-ft of torque by recalibrating the Exige S's engine-management system, enlarging the roof scoop and extending it to the edge of the windshield, and using a larger intercooler. Lotus claims gas mileage remains the same. Acceleration, however, improves slightly, with the 0-60 jump accomplished in 4 seconds flat and 0-100 coming up in 10 seconds. An upgraded clutch plate cover transmits this extra power to the six-speed manual transmission.

Standard equipment on the S 240 includes variable traction and launch controls. The traction control system allows a driver to literally dial with a knob on the steering column eleven different traction settings, from 1 (the least electronic intervention) to 10 (the most) or 11 (traction control off). Launch control allows perfect blast-offs from a standing start, if you follow the proper sequence: Set the rev limiter, floor the accelerator, engage the gear, and slip your foot off the clutch. You'll immediately smell tire smoke and be gone!

Only 20 copies of the limited-edition Club Racer will be offered in the U.S. This model is a street-legal edition aimed specifically at the racing enthusiast. Starting with the Exige S model and retaining its performance levels, the Club Racer is offered in only one paint scheme: Club Racer Blue with contrasting black center tri-stripes. The interior features Microfibre - a moisture wicking fabric - throughout the seats and door panels. Upgrades include 4-piston AP front brake calipers and pads and an Alpine sound system, along with the Starshield protective coating and dealer-installed twin foglights. The Touring Pack, Super Touring Pack, air-conditioning, and a new sports exhaust are also included.

Reviewers are enthusiastically unanimous in their raves for the handling, braking, and steering of the Exige line. AutoWeek's comments are typical: "That means the Exige beats everything we've tested in the nimbleness and tossability category, including Ferraris, Lamborghinis, Evos, STIs and Porsches." What's left?

Standard equipment on all Exiges: a new gauge cluster with trip computer, an ABS system with Lotus/AP Racing and Brembo calipers with ventilated/cross-drilled brakes, forged alloy wheels (16-inch front and 17-inch rear) with Yokohama Advan Neova ultra-performance tires, Bilstein dampers and Eibach springs, power windows and locks, a leather-trimmed Momo steering wheel, an anti-theft system with engine immobilizer, an aluminum handbrake and shift knob, a four-speaker Alpine stereo with CD player, and black cloth ProBax anatomically designed seats, which are said to improve blood flow to the legs and negate the need for an adjustable lumbar.

Weighing in at only 2,077 pounds, reviewers all noted the Exige's rather spartan interior. This is a driver's car; there's even a checkbox on the order form to skip the air-conditioning to save weight. After all, full floor carpeting and a cupholder are part of the Touring Pack option package, which also includes a thermal and sound-insulated soft top, full leather seat and door trim, a leather-trimmed center console, an iPod connector, and "additional sound insulation." Minimal safety equipment - beyond the car's handling and braking capabilities - includes driver and passenger airbags. There is also a Track Pack that adds even more race course refinement in the form of adjustable dampers and spring perches.

Reviewers have no doubt that the Exige is a race car that can be licensed for the street, but unless you enjoy an ultra-stiff suspension, it should not be driven on public roads. But for the weekend racer, Road and Track calls it "the best street-legal production track car you can buy."

Have you driven a 2008 Lotus Exige?
Rank This Car