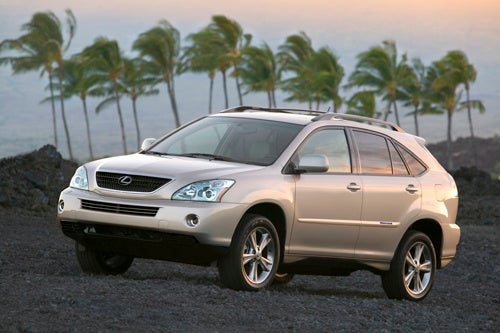 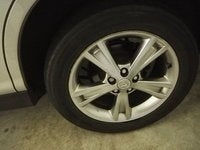 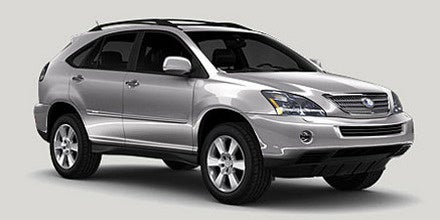 The Lexus RX 400h falls into the midsize luxury SUV category. Launched in 2004, additional cosmetic options and the ability to switch off the stability and traction control systems are the only changes for 2008 over last year's model.

The RX 400h underscores Toyota's prowess as a pioneer in hybrid automotive power systems. Its hybrid powertrain - two powerful electric motors on the all-wheel-drive version and 30 battery modules - adds less than 300 pounds. The Toyota system configures electric motors assisted by a gas engine. Other hybrid systems usually focus on a gas engine with electric-motor assistance. As a full-hybrid system, the RX 400h can operate in gas or electric mode or combine both.

The front-wheel-drive RX 400h has a single electric motor in front, while the all-wheel-drive model has one up front and one in back to power the rear wheels, as the front and rear axles don't have a connecting driveshaft. Driving the RX 400h is an unusual aural experience. Turn the key and you'll hear silence. Reviewers found it a bit strange moving the gear lever into Drive without any engine sound. Gliding through parking lots and through the city, drivers will need to look out for pedestrians, who will not hear you coming. The EPA estimates reflect this driving experience, with a 28/25 mpg city/highway rating; most of the time - up to 40 mph - you'll run off the 30 battery modules packed under the rear seats in the city.

When an extra surge of power becomes necessary, step on the gas and the aluminum 3.3-liter V6 kicks in quickly and seamlessly with plenty of thrust. Combined with the 12,000-rpm-capable high-torque electric motors, you'll have a total of 268 hp available. The transmission is a planetary gear transaxle, which acts like a conventional CVT transmission. 0-60 in the front-wheel-drive model comes up in 7.5 seconds, while the all-wheel-drive version takes 7.3 seconds. The RX 400h handles beautifully, being responsive and firm as it corners, with less lean than its non-hybrid sibling, the RX 350. The cabin is quiet at all speeds - Lexus engineers even aerodynamically shaped the roof rack.

Inside, you'll find Lexus quality. The RX 400h is easy to enter and exit due to comfortable seat heights. On the dash, a power level meter that displays the power output of the hybrid system replaces the tachometer. Switches and controls are Lexus-quality, and while the rear seats are most comfortable for two, there are seatbelts for three. Folding the rear seats provides 84.7 cubic feet of cargo space - more than the BMW X5, the Mercedes-Benz M-Class, or the Infiniti FX.

Standard safety features include front airbags along with a driver knee airbag. Front side-impact airbags with curtain-style head protection airbags that cover both rows will deploy in the event of a rollover. Advanced ABS and electronic stability and traction control are also standard.

Prob started when alarm went off, fan went on, drained the smaller battery, then car won’t star. Dealer could not fix it. Other mechanics suspect a short, maybe from water? It only seem to happen wh...

Close Fuel lid warning light wont shut off I just picked up my SUV from the mechanic for an oil change, and AC charge. But now the "close fuel lid" warning is on and wont shut off. The lid is clo...

I just picked up my SUV from the mechanic for an oil change, and AC charge. But now the "close fuel lid" warning is on and wont shut off. The lid is closed. But it almost looks like someone tri...

What Does "Check VSC System" Mean?

For 2 days now, every time I start the car, this message appears "Check VSC System". What does it mean? Today, the car failed to start at all. The "Ready" light will not come on. Is the starting bat...

I read over the comments and responses--my issue is a little different- hopefully someone can guide me the right direction---The same time the lights came on--when I pushed on the accelerator to go f...