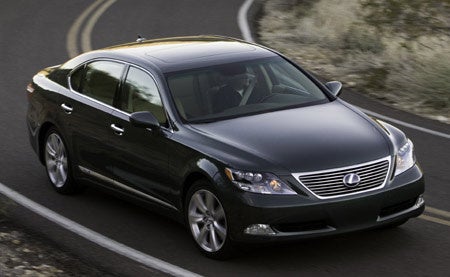 After receiving a complete update in 2007, the Lexus LS 460 changes little for 2008. However, this luxury-oriented, rear-wheel-drive sedan still offers a wide range of innovative technologies and high-end features that make it compelling and competitive when compared to similar luxury cars from European automakers.

As in the previous year, the LS 460 comes in both standard-length and long-wheelbase (L) trims. New features for 2008 include an Adaptive Variable Air Suspension system for the LS 460 L. This computer-controlled system continually adjusts the shock-absorber damping rates to provide more precise handling and a more comfortable ride. The driver can also adjust the firmness of the ride using a switch on the console. In addition, a new exterior color, Opaline Pearl, has been added for 2008.

Carry-over features from the previous year include leather-trimmed seats, a wood-and-leather-trimmed steering wheel and shift knob, power-adjustable front seats, a power tilt-and-slide moonroof, and a 10-speaker audio system with a six-disc CD changer.

Options include an Advanced Parking Guidance System, which assists the driver when parallel parking or backing into a parking space. Other optional features include a voice-activated navigation system, climate-comfort front seats with a heat/cool knob, heated rear seats, a heated steering wheel, and a 450-watt, 19-speaker Mark Levinson audio system.

Drivers and reviewers have commented on the quietness of the LS 460's 380-horsepower, 4.6-liter V8 engine, which capably powers the sedan, driving it from 0 to 60 in 5.4 seconds. The engine links to a first-of-its-kind eight-speed automatic transmission. Both the engine and transmission have been designed for improved fuel efficiency.

Drivers and reviewers give the LS 460 high marks for its engine and ride, as well as its transmission and fuel economy. They also like the extra space in the rear seats that's available with the long-wheelbase trim, although some find the electronics systems tricky to operate, and others note the car's handling could be improved.

GuruYVRZC The best sedan for the money. All the modern features, park assist, keyless entry and start, Bluetooth, heated and cooled seats, and endless reliability.

Robert I LOVE THE BODY STYLE.

Users ranked 2008 Lexus LS 460 against other cars which they drove/owned. Each ranking was based on 9 categories. Here is the summary of top rankings.

My headlights turn off maybe 10 to 15 seconds after turning on. Changed both ballast and headlight assembly. Still having the same problems. I need your help, about to pull my hair out!!!

What’s A Good Price To Buy This Car At?

My Family Have A 2008 Lexus LS, We Were Wondering If The Lexus Dealer Can U...

what could be causing my 08 LS to idle roughly?