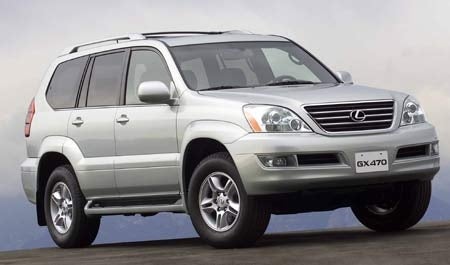 The new Lexus GX 470 proves that this "old-fashioned" SUV-body-on-truck-frame model still has plenty of life left in it. For 2008, there are only cosmetic changes - new metallic finishes and some interior trim additions.

The GX 470, based on the Toyota 4Runner, provides comfortable seating for five. An optional third-row seat expands seating to eight, yet, as with most third rows, the space is for children. However, being a Lexus, that's no ordinary space: An optional DVD entertainment system, ranked one of the best, features a nine-inch-wide, high-resolution screen that lowers from the headliner and the third row has its own air-conditioning.

With three rows of seats in place, the GX 470 has a 13-cubic-foot cargo bay. Fold down or remove the two rear rows, and you'll find more than 77 cubic feet available. For comparison's sake, here are cargo capacities for a couple of competitors: Mercedes-Benz M-Class, 72.4 cubic feet; BMW X5, 62 cubic feet.

Up front, the driver and passenger are treated to large, comfortable, roomy seats, rich leather and bird's-eye maple trim. Gauges, instruments, and switches are typical Lexus - large, easy to read, and well labeled.

All of this comfort and roominess is motivated by a typically smooth Lexus 4.7-liter V8, which spins out 263 whisper-quiet horsepower. This power flows seamlessly through a five-speed automatic transmission that pushes and pulls (with standard full-time four-wheel drive) the GX 470 from 0-60 mph in 8.1 seconds; the GX 470's towing limit is 6,500 pounds. With its variable valve timing, the V8 earns EPA estimates of 15/19 mpg city/highway. It will run on unleaded regular, though Lexus recommends 91 octane.

Both comfortable highway cruising and true off-roading are real options due to the state-of-the-art suspension systems built into the GX 470. Variable-ratio rack-and-pinion steering adapts to the task. The standard adaptive variable suspension monitors shock-absorber damping at each wheel, and there are four driver-selectable suspension settings. The GX 470 has an optional Kinetic Dynamic Suspension System that can disengage its stabilizer bars for more suspension flexibility over any kind of off-road terrain. Also included are antilock brakes, electronic brakeforce distribution, Vehicle Stability Control, Downhill Assist Control, and Hill-Start Assist Control.

Basically, the GX 470 has you covered going, coming, sideways, up or down hills and on or off road - all of this with Lexus luxury. The GX 470 represents the SUV as an automotive artform.

How Many Cats Does The Lexus 450 Have

What Can Be The Vibration Source?

it vibrates like you were on a washboard road . Starts suddenly at speeds 30 to50 mph under modest acceleration, and stops if you let off the gas. What is the vibrating?

How Do I Renew My Listing

I have been notified my listing expires in 2 days but when I click on renew, the program stops me with a guy holding his hand out. What's up with that???

After Disconnecting Battery And Reconnecting In About 4 Hours All Of The In...