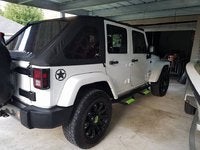 Average user score
4.7 ⁄ 5 stars
Based on 49 reviews
The Best Wrangler Ever Built, Period. by Chris — Jeep did a great job with the redesign in 2007. You can look at the resale values and quickly deduce that. It's the ONLY vehicle besides maybe the Ram trucks that are made by Chrysler and actually ho... Read more
2008 Wrangler Sahara Unlimited 4wd 4dr by kdh1969 — kewl look lots of legroom good power incredible 4wd will go anywhere you want navigation and sirius hard drive are awesome soft top and hard top handles well on the highway snow and ... Read more
Was Everything I Thought It Would Be And More. by SamanthaCronk — I loved how easily I could customize it to my liking. I enjoyed driving it every day and being able to call it mine. It became really convenient that the heater gets very hot and AC gets very cold. Th... Read more 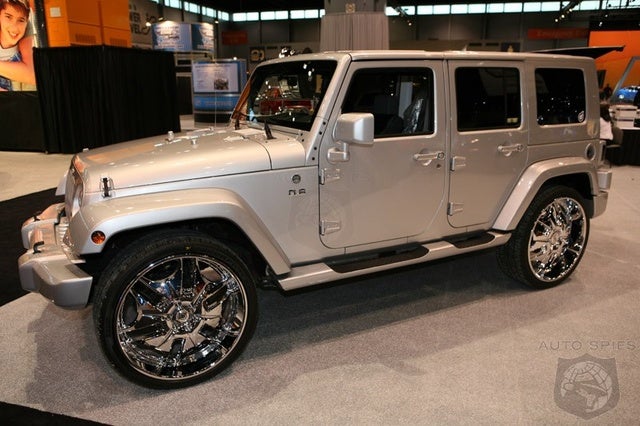 Now in its second year as an offshoot of the 2-door Jeep Wrangler, the 4-door Wrangler Unlimited carries over into the 2008 model year with relatively minimal changes. The entire Wrangler lineup received a major redesign in 2007, a fairly big deal for a vehicle that is known for its traditional looks and minimal luxury features.
The Wrangler Unlimited is built on a 116-inch wheelbase, substantially longer than the 2-door Wrangler’s 95.4-inch wheelbase. The additional length makes room for the rear doors, of course, but also for a 3-passenger rear bench seat that increases total passenger capacity to 5, as opposed to the 2-door Wrangler’s 4-passenger 2+2 seating arrangement. Although all Wrangler trims come with standard 4-wheel drive (4WD), the Wrangler Unlimited is available with both 4WD and rear-wheel drive (RWD), a concession of sorts to folks who might prefer the Wrangler Unlimited for its style or additional passenger capacity, rather than the Wrangler’s famed off-road prowess. The Unlimited comes in three trim levels: the base X, the Sahara, and the Rubicon. Note that adding 4WD to either the X or the Sahara also adds a couple thousand dollars to the price tag; 4WD comes standard on the Unlimited Rubicon.
Powering the 2008 Wrangler Unlimited is a 3.8-liter V6 producing 202 hp and 240 lb-ft of torque. A 6-speed manual transmission is standard, a 4-speed automatic optional. Fuel economy is not particularly good: 15 mpg city/20 highway/17 combined with the automatic and RWD, 16/21/18 with the manual and RWD, 15/19/17 with the automatic and 4WD, and 15/19/16 with the manual and 4WD.
With an approach angle of 44.4 degrees, a departure angle of 40.5 degrees, and 10 inches of ground clearance, the Wrangler Unlimited’s strong body-on-frame construction is clearly designed to tackle rough terrain. Heavy-duty Dana 30 front and 44 rear axles (Dana 44 axles both front and rear on the Rubicon), an electronic-disconnecting front stabilizer bar, and either a Command-Trac part-time 2-speed transfer case (on the X and Sahara) or a Rock-Trac 2-speed transfer case (on the Rubicon) provide added mechanical support during harsh off-road driving. The Rubicon also includes electronic front- and rear-axle lockers and 32-inch BF Goodrich off-road tires. A Trac-Lok limited-slip rear differential is optional.
The 2008 Wrangler Unlimited is outfitted with a standard Sunrider soft top (making it the only 4-door convertible on the market), and a “Freedom Top,” 3-piece modular hard top is available as well. Interior features are limited, but there is 46.4 cubic feet of cargo space behind the rear seats and 83 cubic feet of cargo space with those rear seats folded down. Plastic surfaces and drain holes in the floor make it easy to wash out the Wrangler Unlimited’s interior.
The Wrangler’s safety focuses on off-road driving, and not too much more than that. Dual front airbags and antilock brakes come standard, but side-impact airbags remain optional. The Insurance Institute of Highway Safety gave the 2008 Wrangler Unlimited scores of Good on the small and moderate frontal-overlap tests and a score of Marginal on the side-impact test.
The 2008 Jeep Wrangler Unlimited does, however, remain affordable. X trims equipped with 4WD start just north of $20,000, and you can get a standard Rubicon for under $30,000. Although owners complain of cabin noise and poor fuel economy, the Wrangler Unlimited continues to give them a fun driving experience and a unique vehicle to call their own.

What's your take on the 2008 Jeep Wrangler Unlimited?

Users ranked 2008 Jeep Wrangler Unlimited against other cars which they drove/owned. Each ranking was based on 9 categories. Here is the summary of top rankings.

Have you driven a 2008 Jeep Wrangler Unlimited?
Rank This Car

I added a car to sell on my phone but it's not showing on this account. Can you assist? On my phone the account says GuruRPVH3 up by account. I'm not sure what that is.

The radio in my Jeep will play just fine for as little as 30 seconds to ten minutes or more but eventually all of my speakers will suddenly cut off. The radio is still powered on, only the speakers c...

Intermittent No Crank No Start

Jeep will start right 50x in a row and run no problems. Occasionally it will have no start no crank issue. Acts like t would if battery cables were loose and would Just make a click sound. Try agai...