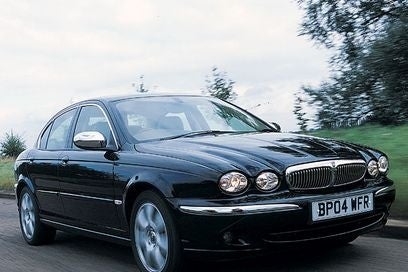 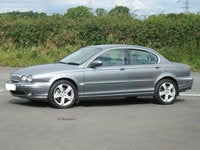 Introduced for 2002, the Jaguar X-Type aims to provide an economical introduction to the Jaguar line. The car has seen no major refreshments since its introduction, and some critics believe that it shows. For the 2008 version, the only changes are the addition of former options to the standard equipment column.

The X-Type, as an entry-level Jaguar, has only one drivetrain offering. Its 3.0-liter V6 produces 227 hp, powering through a five-speed automatic transmission and making the 0-60 jump in 7.6 seconds, according to Consumer Guide, or 7.1 seconds, according to Jaguar. Some reviewers found the engine lackluster, but others found the power "accessible over a wide range of speeds." The automatic transmission was also an item of disagreement, with some expressing frustration with its "tardy downshifts," while others found "it worked very well," enjoying its "mind reading" shifting that suited driving conditions well and appreciating its semi-manual capabilities. EPA estimates on fuel economy are 16/22 mpg - below average for this class. Consumer Guide found a 19-mpg average for mixed city/highway driving and 21.4 mpg in mostly highway driving.

The all-wheel-drive sedan's handling was considered stable and secure under most road conditions, but harsh over bumps and ruts. John Rettie and associates, however, tested the X-Type under a wide variety of road and weather conditions, from French back roads to the Atlanta Motor Speedway, and praised all aspects of its handling - even at 120 mph on the Speedway's banked turns.

The interior is also a target of criticism, mainly for Ford's use of less-than-upscale plastics alongside the wood, leather, and chrome one expects in a Jag interior. Critics also could not agree on the seats, some saying they're too soft, and others commenting on their adequacy in terms of support and comfort. With 16 cubic feet of trunk space, the X-Type holds more than others in its class - the Audi A4 offers 13.4 cu.ft.; the Mercedes C-Class, 12.2 cu.ft.; and BMW 3-Series, 12 cu.ft. And the X-Type's rear seats fold down to offer even more space.

Standard front-seat side airbags and side-curtain airbags for both front and rear, along with a knee bolster for the driver, provide interior protection. Stability control and ABS are also standard. One reviewer found the stability control system offers excellent functionality. The Insurance Institute for Highway Safety gave the sedan a top score for frontal offset crashes, while side-impact testing results were only marginal. Yet the National Highway Traffic Safety Administration gave the X-Type a four-star rating (out of five) for side-impact worthiness.

Critics point to the X-Type's ancestry in Ford's European Mondeo front-wheel-drive sedan chassis as the source of its mundane performance and quality levels. Other reviewers, in defense of the X-Type, note that its standard all-wheel drive sets it apart not only from the Mondeo, but also from many of its near-luxury competitors, in which such systems are usually optional. These reviewers also defend Ford's attempt to expand Jaguar's buyer base with the X-Type. In the end, buyers will be the final arbiters.

Have you driven a 2008 Jaguar X-TYPE?
Rank This Car

Have an ongoing intermittent issue with gearbox on my 2009 X-Type 2.2 Diesel Auto X400. Hear a slight "thud" when accelerating from 2nd to 3rd, warning lights come on, and car sticks in second and w...

If acceleration is too severe the warning light says GEAR BOX FAULT. The car looses power and will not change gear. Stopping the car and switching off the ignition and then on again. Every thing is ...

Hi there, ive recently serviced my x tye jaguar-oil filter ,oil, fuel filer and air filter.My oil light has started flickering when i accelerate. i have also replaced the oil sensor and still no joy...

While driving suddenly without any related problems. Screen shows Engine system fault. DSC system fault ... red and yellow lights on dashboard the engine keeps tuning with a minimal power till I s...