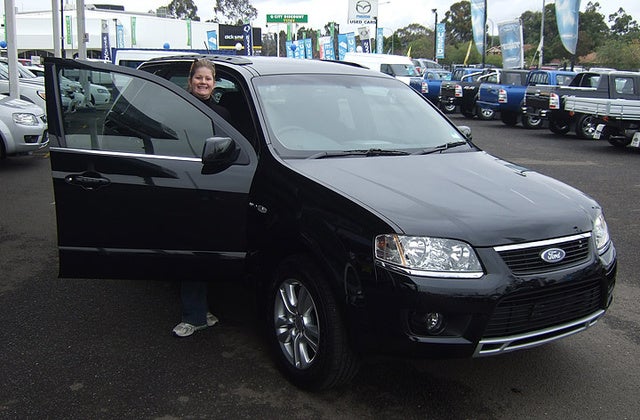 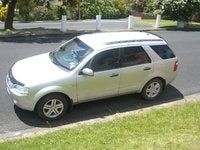 Looking for a Used Territory in your area?

Maintaining its status as Australia's best-selling SUV, the 2008 Ford Territory does little to mess with success, and in fact improves on it by adding a turbo engine to its popular crossover. In an attempt to appeal to both urban and outback drivers, the 2008 Territory blends SUV height and versatility with car-like handling.

A past winner of Wheels Magazine Car of the Year, the crossover comes in five trims, all offered in either rear-wheel or all-wheel drive (the turbo versions come only with all-wheel drive). The TX, TS, and Ghia feature a 190kw or 250-hp 4.0-liter I6, while the XR Turbo and Ghia Turbo adds a turbocharger to boost the I6 engine power to 245kw or 329-hp. Rear-wheel drive vehicles get a 4-speed sport-shift automatic, and the all-wheel drive upgrade to a 6-speed sport-shift. ABS brakes, dual front and side curtain airbags and stability control are all standard, and all-wheel drive models have the option of adding Hill Descent Control for less wear and tear on the brakes. A rearview camera and backup sensors are also available for all trims (standard on the Ghia).

The big news for the 2008 Territory is the possible edition later in the year of the F6X, a turbo performance version of the SUV that uses the same 4.0 I6, but delivers 362-hp. Larger Brembo brakes, scuff plates, and 18-inch alloy wheels will all be standard.

The 2008 Territory can be configured with two or three rows, for five to seven passengers. Both rows fold flat into the floor for extra storage, and the interior offers plenty of storage options, flexible cupholders, and purse hooks in the front row. Moving up to the Ghia adds leather seats. With its standard features, modern styling, and easy handling, the Territory sets its sights on such rivals as the BMW X5, though at nearly half the cost.

What's your take on the 2008 Ford Territory?

Have you driven a 2008 Ford Territory?
Rank This Car

Looking for a Used Territory in your area?