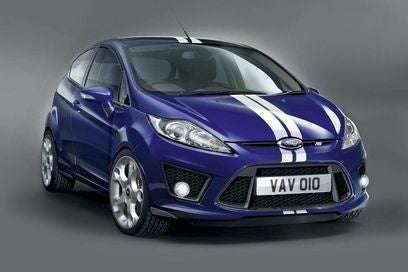 Ford's first major global car, the 2008 Fiesta, initially appeared in Europe, with a nearly exact version scheduled to arrive in the U.S. sometime in 2009. One of the few minor changes between the European and stateside versions will be a slightly longer front end, necessary to meet federal U.S. safety regulations. For the most part, however, the U.S. version of the Fiesta will mimic the European version's design and will retain its aerodynamic bullet shape, stretched-out headlights, trapezoidal grille, prominent wheel arches, tapered roofline, and rounded rear window. Ford calls it a "kinetic" design, and overall it's much hunkier and competent-appearing than the previous-generation Fiesta. It also will offer more interior space than the vehicle it replaces, as well as upgraded safety features and mechanical systems.

The new Fiesta will ride on the same B2XX small-car platform introduced for the MAZDA2 and planned primarily for use in the European and Japanese markets. The Fiesta's platform and structure emphasize light weight and strength, with an eye toward safety in crashes as well as fuel economy and sporty handling. Helping to ensure the safety of occupants are such features as a knee airbag, part of the vehicle's Intelligent Protection System.

Although exact U.S. specifications are not yet known, the European version comes in three-door (two doors and a hatchback) and five-door versions, with a choice of five engines, including an ultra-low-emissions ECOnetic engine, 1.25- and 1.4-liter gas engines producing 60 and 90 hp, and two diesel engines. Most engines will link to a five-speed Ford Durashift manual transmission, although one of the diesel engines (a l.4-liter powerplant producing 90 hp) will link to a four-speed automatic.

The interior highlight, according to Ford, is the Fiesta's re-envisioned center stack (the central part of the dashboard and console), which the automaker says was inspired by a mobile phone (a very large one, of course). Its futuristic design separates the three key elements of the audio system, including the control buttons, display, and underlying electronics, to create a more functional and visually appealing arrangement. Other features include an MP3 tray with a jack for charging the device, and Bluetooth wireless connectivity. Switches and buttons on the steering wheel also enable drivers to control the car's electronic systems.

Overall, the design of the controls and instrument panel carry forth Ford's HMI (Human Machine Interface) system, already available in the automaker's Mondeo, S-MAX, and Galaxy vehicles. Among other benefits,it allows for a large-screen display and other convenience features typically not available in small cars. Ford says it expects more than 85 percent of the Fiestas sold to include one of two optional multifunction displays.

Have you driven a 2008 Ford Fiesta?
Rank This Car

Part That Sprays The Water On The Window Screen From Bonnet

A monkey in safari park pulled my water sprayer off the bonnet , ford fiesta 08 .

my 2008 i.6 diseal turbo bought 2nd hand 6 months ago coolent fan will not switch off i have replaced relays and thereostat but it is still happening any ideas anyone

Ford Fiesta 2008 When The Engine Will Hot That Moment The Car Cant Br Resta...

My ford fiesta 2008 ; when the car started and run above a 10 km if we turn off my car can't restart that time need to cool the engine, what is the problem behind it, battery, oil, coolent are per...

I HV a 2008 bantam which won't start after overheating and breaking the chain. I overhauled the engine, skimmed the crank and polished cam shaft, put new oil pump, bought new crank sprocket and c...