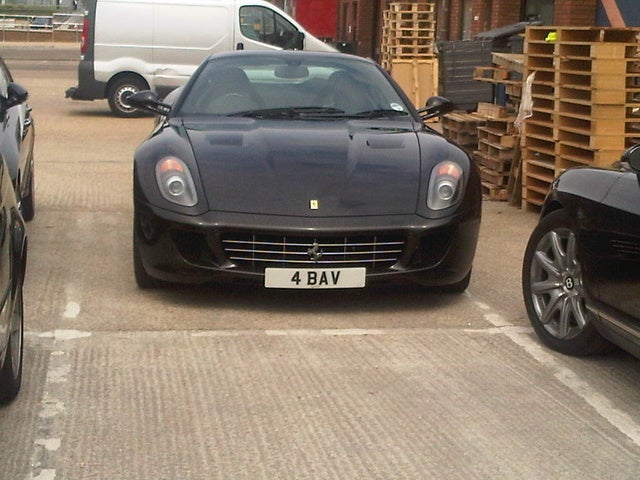 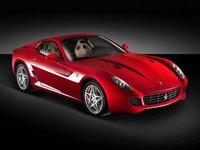 The V12-powered 599 GTB Fiorano sport coupe debuted in 2006 as a 2007 model, replacing the 575M, and continues unchanged into 2008. The 599 GTB, or Gran Turismo Berlinetta, seats two in its stylish cabin and borrows much of its technology from Ferrari's F1 cars.

Designed for superior aerodynamics, the 599 GTB displays sloping lines along its front end, resulting in a sculpted, muscular appearance. In place of a grille, the front air intake, flanked by two smaller air outlets, provides a dynamic look yet serves a purpose as well. Other air intakes are located along the sides of the car, while the raised section of the front hood gives some idea of the hefty V12 located beneath. Two flying buttresses frame the cabin's wraparound rear window, while the tail features singular LED rear lights, rather than Ferrari's signature circular quad lights.

The all-aluminum V12 engine, which carries over from the previous year as well, pumps out a powerful 612 hp and 448 lb-ft of torque at 5,600 rpm, which propels the 599 GTB from 0 to 60 in about 3.7 seconds, though some reviewers are said to have clocked it as low as 3.3 seconds. Top speed hovers around 205 mph. The engine, which projects a satisfying rumble when switched on and revved, links to either a traditional six-speed manual transmission with an aluminum gear shift knob or Ferrari's F1-SuperFast six-speed automated manual transmission. Designed for quick gear-shifting, the F1-SuperFast transmission incorporates an electronic clutch and shifts at electronic speed. The driver shifts using steering-wheel-mounted Ferrari paddle shifters.

The 599 GTB rides on a similarly high-tech SCM magneto-rheological suspension (a first for Ferrari in a road car), which uses an innovative system to control suspension damping and perfectly balance sporty handling and ride comfort. Four sensors located on the suspension wishbones monitor road surfaces and the movements of the car, and react in just 10 milliseconds to ensure an optimal ride. Reviewers unanimously report handling that matches any sports car's, with a lack of the harshness associated with shorter-wheelbase two-seaters. As a result, the 599 GTB can easily double as a daily driver and grand sport tourer.

The Ferrari 599 GTB Fiorano's hand-crafted interior makes extensive use of leather, aluminum, and carbon fiber. Solid aluminum instrument controls and new adaptive racing seats with carbon-fiber side rests are just some of the standard features. Drivers also have the option to personalize the car to fit their tastes. Personalization options break down into four categories, including racing options, such as carbon ceramic-material brakes and four-point harnesses, and materials options, such as a new Enzo Ferrari-inspired carbon-fiber steering wheel. Daytona-style seats with perforated inserts and a satellite navigation system, as well as exterior and interior colors, are among the other features available through Ferrari's personalization program.