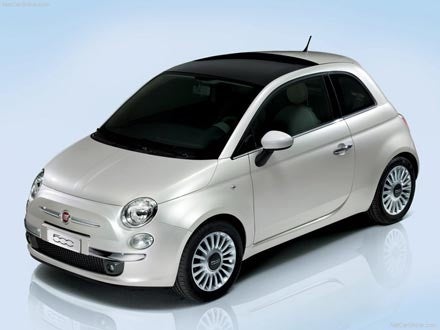 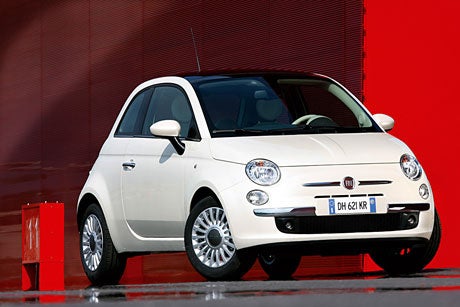 Admittedly influenced by the success of BMW’s MINI Cooper, Fiat has decided to revive its once-popular 500. The ’08 Fiat 500 is, in its present incarnation, a four-passenger, two-door, front-wheel-drive (FWD) hatchback offered in three trim levels, the base 500, 500 Turbo, and the sporty Abarth.

Three engine choices are offered for the ’08 Fiat 500, as well as a choice of two manual transmissions, a five-speed and a six-speed. The base 500 comes equipped with a SOHC 1.2-liter inline four-cylinder (I4) gasoline engine that puts out 59 hp and 75 lb-ft of torque. Next is a turbocharged and intercooled DOHC 1.3-liter I4 diesel, capable of 68 hp and 107 lb-ft of torque. Finally, there’s a 94-hp DOHC 1.4-liter gasoline I4 capable of 94 lb-ft of torque. This latter engine is claimed to do 0-60 in under 10 seconds and to have a top speed of 115 mph. The 1.4-liter I4 is also represented as averaging 36 mpg with the six-speed manual transmission.

The ’08 Fiat 500’s lower center of gravity and grippy 15-inch tires makes for nimble handling through tight corners, while its tiny size (less than 140 inches bumper to bumper) means easier maneuvering in city traffic. Braking in the ’08 Fiat 500 is described as stable and powerful.

A remarkable similarity in style has been maintained in the ’08 Fiat 500 in comparison to the original, with obvious upgrades smoothly integrated into its retro look. The cabin of the Fiat 500, while not plush or overly roomy in back, features an ingenious single instrument panel incorporating the tachometer and speedometer in concentric circles surrounding the cluster of electronic engine performance readouts. Fiat claims some 500,000 different option configurations for the ’08 Fiat 500 including Bluetooth technology, iPod and MP3 playback capability, and a USB connection.

Standard safety features in the ’08 Fiat 500 include ABS, stability control, seven airbags, and high-strength-steel body construction. A three-path crumple-zone configuration results in a much safer automobile than was the '50s original. This added safety feature, however, has resulted in a lengthier engine-compartment profile than the original had.

A 135-hp I4 engine is in the works for the Abarth trim, with plans to market this car in North America. Apparently, Fiat is eying the success of a re-introduced Alfa Romeo back into the U.S. market to gauge the chances of the 500 catching on here. It seems, however, that both deals are tied to the fortunes of Chrysler Corporation, therefore, it may be that we’ll have to wait a bit longer to see either the Alfa or the Fiat 500 cruising the highways of North America.

does it have a timing belt or chain. thankyou