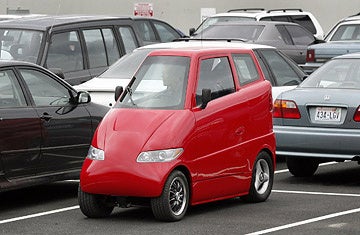 Hand-built and fairly expensive, the 2008 Tango has no problem standing out in a crowd - or slipping easily through one. Manufactured in Spokane, Washington, by Commuter Cars, the Tango looks like a compact car that's been flattened between two giant fists, and in truth it's only 39 inches wide. It also runs on electric power and zips along at speeds of up to 135 mph, so it's highly capable of keeping up with the other traffic and even leaving many larger vehicles in its dust. Because of its size, it can easily fit into a tight parking spot (head first, if need be), so you'll never have any trouble parking the Tango, even in urban environments. In addition, in some areas of the country, such as in California, the Tango can ride side-by-side in a single lane with another vehicle, such as a motorcycle, another Tango, or a similar-size vehicle.

For 2008, the Tango comes as a kit car only, with a very limited number available, and in a single trim, the T600. The kits, which are "mostly" assembled, take about a day to put together, according to the manufacturer.

The Tango's powerplant consists of two direct-current 9-inch electric motors, with one driving each rear wheel. The motors produce a combined torque of 1,000 lb-ft of torque, capable of driving the vehicle from 0 to 60 in an astonishing 4 seconds, and through a quarter-mile in just 12 seconds. For the record, that's quicker than many BMWs and Porsches. The motors link to two direct-drive gearboxes.

The powerplant also includes a 2,000-amp Zilla controller with a 600-kilowatt peak output. The standard battery pack consists of 19 Hawker Genesis lead-acid batteries, although owners can choose from a number of other battery options, including a lithium-ion battery pack. In a standard configuration, the batteries alone weigh about 1,000 pounds, or about a third of the total weight of the vehicle.

The Tango can run up to 150 miles on a single charge with "high-tech" batteries, according to the automaker. To charge it up, just plug the Tango into a 200-amp charging station, which is the equivalent of a dryer outlet. A typical full charge takes about three hours. However, the Tango's batteries can charge to 80% capacity in just 10 minutes, so the vehicle has an additional range of about 50 miles on a quick charge.

The heavy battery pack, electric motors, and controller sit low in the vehicle, which makes the Tango very stable. Safety features include a roll cage that meets Sports Car Club of America (SCCA) and National Hot Rod Association (NHRA) regulations, which means the cage can protect the occupants at speeds of up to 200 mph.

The Tango seats two passengers in a tandem arrangement, with the passenger riding behind the driver. The interior features Sparco custom bucket seats with aircraft pilot-style four-point safety harnesses. Standard features include an Alcantara interior (a composite material used in upscale sports cars and yachts), air-conditioning, cruise control, and a Momo steering wheel, as well as a 400-watt sound system with GPS and a backup camera.

With the rear seat in place, the Tango can carry a few grocery bags in the cargo area, and with the rear seat removed, it can carry two large suitcases and a briefcase, according to the automaker. The Tango also offers a number of interior bins and compartments for storing smaller items.

What's your take on the 2008 Commuter Cars Tango?

Have you driven a 2008 Commuter Cars Tango?
Rank This Car