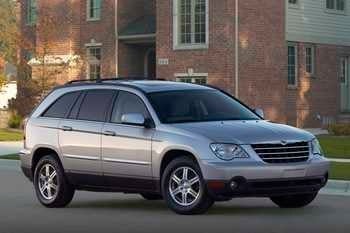 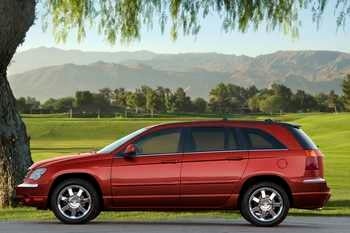 Unveiled in early 2003, Chrysler upgraded its Pacifica minivan/SUV in 2007. The 2008 model has only minor changes. The biggest upgrade in 2007 was under the hood, with a new 4.0-liter, 255-hp V6 coupled with a new six-speed automatic transmission. Reviewers agree that this powertrain provides the Pacifica with the flexibility it needs moving a vehicle of this size. The base model LX, however, retains a 3.8-liter, 200-hp V6 with a less-than-adequate four-speed transmission. Either front-wheel drive or all-wheel drive is available across all three trim lines.

Standard safety equipment was also upgraded on the 2007 model. All models now come equipped with curtain-style head protection airbags for all outboard seats in addition to multi-stage front airbags and a driver's knee airbag. Side-impact airbags for the front seat, however, are unavailable. Antilock brakes with brake assist and a stability system with traction control are also standard. The Pacifica has done well in government crash tests.

The Pacifica benefited from Chrysler's partnership with Mercedes-Benz, most significantly in its rear five-link independent suspension with automatic leveling, borrowed from the Mercedes E-Class sedan. With its 198.5-inch length, the Pacifica roughly matches the Mazda CX-9 and the Ford Taurus X. While most reviewers found its handling to be adequate for "family needs" and its all-wheel-drive system transparent in sailing through foul weather, one reviewer faulted its severe body roll in modest corners and bounciness over large bumps. All seemed to agree that the new 4.0-liter V6 and its six-speed transmission provided satisfactory performance.

The spacious interior comes configured for either five or six passengers. The seating layouts are either 2/3 or 2/2/2. The third-row configuration, however, was faulted as being cramped for adults and seriously limiting cargo space. Interior quality was another area of criticism, with one reviewer pointing out that it hasnâ??t been upgraded since its 2003 introduction.

While the Pacifica presents an alternative to the SUV/minivan, its 15/22 mpg fuel range, low reliability scores, and steep depreciation suggest other American or Japanese alternatives.

What's your take on the 2008 Chrysler Pacifica?

Have you driven a 2008 Chrysler Pacifica?
Rank This Car

I Have Car Listed On Car Guru.Got Message

I have a 2008 Pacifica. ..when I turn the key to start it does nothing. .lights work radio works inside lights work...you can see the milage and the sensor to the doors work...the dashboard doesn...

What can I do to find out why my Chrysler pacfica shows it is overheating only first thing in the morning when u drive it but pull over and its actually not overheating the after I get off work and...

626 views with 3 answers (last answer about a year ago)

88 views with 1 answer (last answer about a year ago)