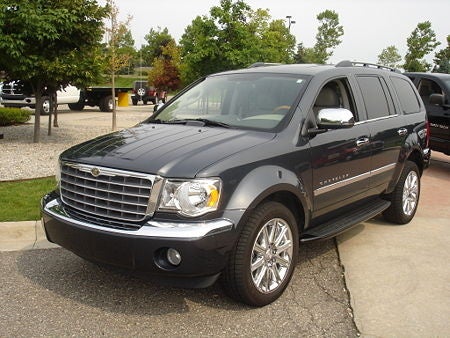 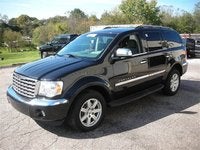 Following its introduction in 2007, the Chrysler Aspen SUV cruises into 2008 with a nod toward fuel efficiency, thanks to a choice of two engines. The Aspen's 5.7-liter Hemi 335 V8 engine comes equipped with a feature called the Multiple-Displacement System, which automatically shifts from eight-cylinder operation to four cylinders when full power is not required, such as when cruising at highway speeds, and shifts back to eight cylinders when needed. This helps conserve fuel while providing optimal power in all driving situations. When kicking on all eight cylinders, the Hemi V8 produces 335 horsepower, which ably moves the luxury-oriented SUV.

The 2008 Aspen can also be equipped with a 303-horsepower, 4.7-liter V8 "flex-fuel" engine, which means the engine can run on E85 fuel (a blend of 85 percent ethanol and 15 percent gasoline). E85 not only emits less carbon dioxide than standard gasoline, but also has a higher octane rating than gasoline. Some drivers note, however, that the 303-horsepower engine can strain at times when moving the Aspen under hard acceleration.

The Aspen's exterior and interior design change little for 2008. Although it borrowed many of its components from the Dodge Durango, including its platform and suspension, the Aspen goes for a more upscale feel, with such standard features as a wood-grain instrument panel and interior trim, low-back bucket front seats, remote keyless entry, an eight-way power-adjustable driver's seat, and an AM/FM/CD audio system with Alpine speakers, an MP3 input jack, and Sirius satellite radio.

The Aspen can seat up to eight passengers in its roomy cabin, which can be easily reconfigured for cargo thanks to 40/20/40-split fold-and-tumble second-row seats and 60/40 split folding third-row seats. As far as the Aspen's design is concerned, drivers note that while its lines are fairly clean and simple, it doesn't have the design flair that distinguishes some of Chrysler's other vehicles.

While drivers and reviewers note that the Aspen's handling and stability are adequate, some point out that the SUV suffers from body sway in the corners, while others note that the Aspen can feel floaty and even a bit sloppy on twisty roads. Braking is not as precise as it should be for an SUV this size, according to some, and many note that the Aspen suffers in overall braking and handling when compared to other vehicles in its class. The Aspen does come equipped with antilock brakes and an Electronic Stability System, which helps drivers maintain control of the vehicle in emergency situations.

What's your take on the 2008 Chrysler Aspen?

Vnp The 2008 Chrysler Aspen is a strong contender for a vehicle that is not oriented to a construction site. Fuel consuption - is consistent with its competition and its purpose. The exterior has softer lines allowing for a sleeker appearance than its counterparts. Weather your traveling to a Board Meeting or Project Site, you will have enough leg room for you and your guest regardless of whether you ar sitting in the front or back. Its interior has a flexible use - fold the 2nd and 3rd row seating down to accomodate a unique antique store find, or return the seating to its upright position for business associates or carpool rides. The tow package capitalizes on the Hemi engine hauling capability for mom or dad's campers, trailers carrying 4 wheelers, or boats. Run it through the car wash and it is ready for a night on the town - no embarrassment here ,,, heels welcome!

antuan1485 No I never drove one, because every dealership that had one was trash.

antuan1485 The Aspen was always in the worst conditions, at every dealership I visited.

Have you driven a 2008 Chrysler Aspen?
Rank This Car

Why Is My Engine Knocking?

My chrysler has been sitting for a couple years and finally got around to get it running again. After starting and I got it to idle it started to make a knocking noise. I have change the oil and fi...

I have a 2008 Chrysler aspen and gotta replace the deactivation solenoid got the part but how long is it drivable before I do or should I park it up till I can get it into the shop?

The AC in a 2008 Chrysler Aspen has stopped working. The fan cannot be heard at any fan speed setting. At idle or low speed city driving the AC cannot be felt. At faster highway speeds the AC can be...

How Do You Adjust The Parking Brake On 2008 Aspen

Where do you find the adjuster for the rear parking brake...cant get the rotor off and need to know how