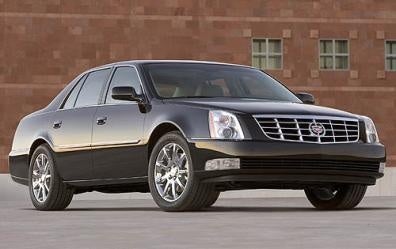 Average user score
4.8 ⁄ 5 stars
Based on 18 reviews
It Looks Expensive And Is Impressive To Drive by cuddles — This is my third cadallic and won't be my last, the looks and ride tells everyone it is a cadallic. The quality is in the name and looks. The only reason I am not trading it to a dealer is they want t... Read more
2008 Cad Dts by TxGolfGuy — It's comfortable, love the ride on long trips. Mileage is okay for a large V8 (avg 22.5 highway/city). Great acceleration. GREAT storage space in the truck. Only time in the shop is during scheduled ... Read more
Sweet Solid Caddy by Brian — I love this car. I have rented one a couple of times and it is a sweet ride. I know it is about as PC as burning tires in the backyard but you can't drive one of these big highway cruisers without enj... Read more

The stuff of rock and roll songs, movies, and American nostalgia, Cadillac's DeVille lives on. And in its De Ville Touring Sedan (DTS) form the "living" is easy. A few years ago, Cadillac, in line with its overall refreshed line, gave the DeVille a new look and the new name. While the DTS still lags behind Lexus and Mercedes in material quality and handling performance, it is also thousands of dollars less expensive.

The DTS remains one of the few sedans that can comfortably seat six adults for long-distance cruising. The Cadillac's plush, spacious, quiet interior and nearly 19 cubic foot trunk (four golf bags, easily) makes it a serious candidate for king of the highway award.

Underneath that comfortable interior Cadillac has wired the DTS for safety. Stability control comes standard across its five trim levels, along with ABS disc brakes, front-seat side and full-length side curtain airbags. The DTS achieved a five-star rating in National Highway Traffic Safety frontal crash tests for the driver, four stars for the passenger, and four stars for front and rear passengers in frontal-offset testing, with an "Acceptable" (second highest) rating for side-impact.

Within its class, the DTS outscores the Lincoln Town Car in performance and the Chrysler 300C in interior size and luxury.

GuruHV8XV wonderful. I am looking for a 2008-2011 DTS Red in color, can you help? The DTS also came with a third in line choice motor called Super in which it is 5.3 300hp NorthStar engine.

Have you driven a 2008 Cadillac DTS?
Rank This Car

TURN OVER BUT WONT START

CAN IT BE THE BATTERY

I charged the battery, lights & dinging sounds came on but it won't turn over.

4 views with no answers yet
90

I just had a new alternator, battery and starter installed in my 2008 Cadillac DTS... And it still won't start. Is it possible that the starter was put in backwards?? If not, what could be the pro...

My fuse box was smelling burnt , had to replace the whole box because it could have started on fire Apparently this is common in this year of car, why is there not a recall on it?

The interior lights come on when any door is opened except for the drivers door. Cannot locate a switch.