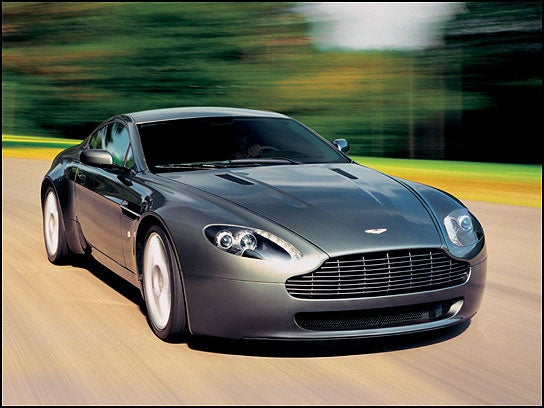 Aston Martin took an already impressive vehicle - the V8 Vantage - and ramped it up a notch, or two or three, with the N400 in celebration of the manufacturer’s exploits at the famed Nurburgring Motorsports Complex in Germany. The 400 is for the horsepower saddled up in the speedy sports car. The “N” is for Nurburgring, where the two-seater with its handsome, soft and curvy lines showed off its stuff on the courses at the track and in its 24-hour race.

The N400 comes in both a Coupe and a Roadster, and they expand the 2008 Aston Martin V8 Vantage lineup to four, joining the base Coupe and Roadster.

A 4.3-liter V8, with a 6-speed manual or automated manual transmission with paddles, powers all versions of the 2008 Aston Martin V8 Vantage. Engine tweaks including a recalibration for high-octane fuel and a pair of air ducts with variable intakes that are placed behind the front bumper on either side of the front grille help improve the aerobic fitness of the N400 engine when it gets above 5,000 rpm. The upgrades help push it to the 400 hp mark with 310 lb-ft of torque.

The regular 2008 Aston Martin V8 Vantage Coupe and Roadster come up just a bit shorter at 380 hp and 302 lb-ft of torque. All the setups have estimated fuel mileage numbers of 12 mpg city/19 highway. The carmaker notes that the N400 gets to 60 mph in 4.9 seconds, about 0.2 seconds quicker than the standard V8 Vantage, and that it tops out at 177 mph.

The 2008 Aston Martin V8 Vantage N400 offers homage to Nurburgring in a couple of other ways besides its nametag. It comes in an eye-catching orange, labeled Karrussell Orange, Bergwerk Black and Lightning Silver. Both the Karrussell and Bergwerk choices are named after corners on the Nordschliefe course at Nurburgring, Bergwerk being one of the most gnarly spots on the track and the site of numerous crashes. If orange or black as options make for a tough decision, the going gets easier on the interior and there’s no room for debate: The only choice is black. A range of colors is available, however, for the contrasting stitching in the cabin.

A menu of other changes in the 2008 Aston Martin V8 Vantage N400 differentiates it further from the basic Vantage. A sports package comprised of an anti-roll bar in the rear, stiffer springs and upgraded dampers adds to the guilty-pleasure performance and ride of the vehicle and lets Aston Martin step things up even more.

Designed to celebrate performance, the 2008 Aston Martin V8 Vantage N400 does so admirably and draws raves from the experts for its precise handling and ride. The rear of the V8 Vantage, some note, has a tendency to bounce a bit, but that’s not the case with the back end of the N400.

Reviewers swear by the feedback and response the N400 gives, by the way it hugs the road and by the reassuring feel of its aluminum chassis and suspension. Most experts, it should be noted, have few complaints with any of the two-seater 2008 Aston Martin V8 Vantages, the baby Astons as they like to call them. It's just that the N400s handle a bit better than the base models and fill in any loose ends.

Quite simply, reviewers like much about the V8 Vantage, starting with the sweet sounds the engine makes when the driver, first, turns the key and pushes the start button that brings it to life, and later, too, when working through its gears.

“Sexy” and “seductive” and "exclusivity" are among the words the experts trot out when describing the 2008 Aston Martin V8 Vantage, especially the roadsters. They appreciate the way the engine sounds and the car itself. The roadsters have, by the way, a power soft top that goes up or comes down in about 18 seconds.

Some reviewers do feel that in a luxury vehicle like the Vantage V8, features such as cruise control and heated seats ought to be standard. They are in the N400, but they're options in the regular Coupe and Roadster.

Stability and traction control, a full array of airbags and antilock disc brakes with brake assist are among the safety features on the 2008 Aston Martin Vantage.

Have you driven a 2008 Aston Martin V8 Vantage?
Rank This Car

any comments on the Aston as a daily driver, say 5k miles per year?

What Litre Is The V8 In The V8 Vantage?

Want Consumer Reviews For Aston Martin Mechanics In Portland, OR

What Is Defferece With Models Of The Aston Martin?