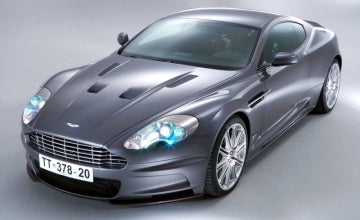 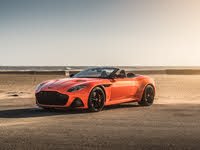 Officially unveiled at the Pebble Beach Concours d'Elegance in California in August 2007, the Aston Martin DBS epitomizes the concept of an exotic supercar. Dubbed "the ultimate sports car" by the automaker, the DBS coupe mixes sleek, fluid styling and cutting-edge design with the power of a hand-built 6.0-liter V12 engine, which Aston Martin borrowed from the DB9. However, the automaker pumped output to 512 horsepower. As a result, the V12 can drive the sport coupe from 0 to 60 in just 4.3 seconds, making this a true supercar.

The two-door, rear-wheel-drive sport coupe seats two inside its aluminum and carbon-fiber body. Outside, the DBS exhibits distinctive Aston Martin design cues, such as its five-bar polished alloy grille, its low race-inspired stance, flared wheel arches, and a prominent spoiler integrated into the trunk lid.

Aston Martin notes that every design element has a functional as well as an aesthetic purpose. The car's low, wide stance, for instance, helps improve handling, while intake ports in the lower bumper help channel air into the engine. And the carbon-fiber body results in a slightly lighter car that's quicker and more nimble on its feet.

In many ways, the DBS has been designed to showcase the latest Aston Martin technology and to serve as the automaker's flagship model, taking over for the now-vanquished Vanquish. The attention to detail exhibited in the car's exterior extends to the interior as well. The center console, for instance, has been designed to be more efficient and functional, and emphasis has been placed on creating easy-to-use controls for the entertainment, satellite navigation and climate control systems.

Attention to detail even shows up in the choice of interior leather. For the seating, Aston Martin has opted for softer semi-aniline leather with Alcantara leather trim. The power-adjustable seats display unique DBS stitch patterns and the DBS logo. The main instrument cluster features white numerals on a dark graphite background, which contrasts nicely with the polished alloy controls and gearshift knob. It all makes for a truly world-class luxury sports car designed for the world's most discerning drivers.

Have you driven a 2008 Aston Martin DBS?
Rank This Car

what is the top speed of the 2008 Aston Martin DBS