Have you driven a 2007 Suzuki Swift?
Rank This Car

Performance: Good Build Quality: Good Aperaance: Very Good Cost of Ownership: Par for course Fun Factor: Top Class The car is a fun to drive experience, but as a family car i would not recomend it. ... Read More

Great For Daily City Use. By Shamim

A Good Low Cost Car, Ideal For A First Buy By Helen

Its a fun car to drive, good fuel economy and low maintenance cost. Its bigger than you think inside and the interior its nice inside as well as looking nice on the outside. I have done a couple of lo... Read More

Swift As The Wind By Manu

My First Car By Bálint

This Car Is The Best! By Jasmine

I love my little car! Shes slower than a motorbike (1cc) but I can still overtake most people on the motorway! Shes cheap to run and has electric windows and central locking AND a tape player, what is... Read More 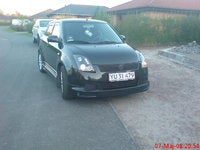 Looking for a Used Swift in your area?

CarGurus has 1 nationwide Swift listings and the tools to find you a great deal.