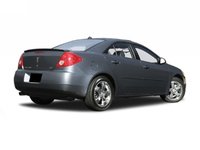 The 2007 Pontiac G6 is one of the most customizable vehicles on the market today. 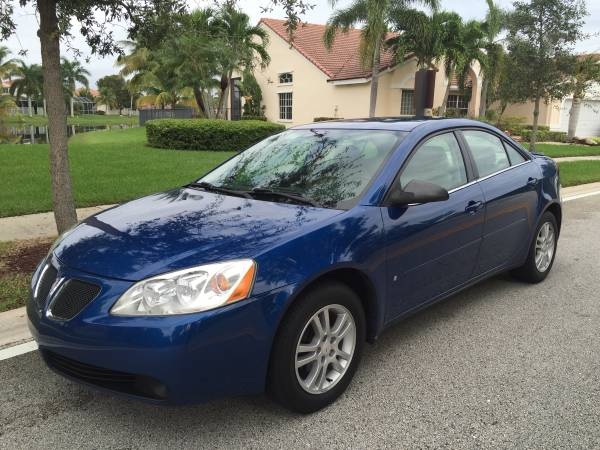 The Pontiac G6 is offered in three body styles, with three engines, and two transmissions. Add that to a laundry list of standalone options and packages, and the car is one of the most customizable vehicles on the market today. The G6 is offered as a mid-sized sedan, as a coupe, and as a hardtop convertible.

Pontiac is offering the G6 in three trim levels for the 2007 model year: base/Special Value, GT, and GTP. The Pontiac G6 GT model is offered as a sedan, coupe, or convertible, while the GTP trim is offered in sedan and coupe configurations only.

The Pontiac G6 is targeted at new-car buyers that want a value-conscious car with a comfortable ride and a wide variety of available features. It competes with the Mazda 6, Toyota Camry, Honda Accord, and Nissan Altima. 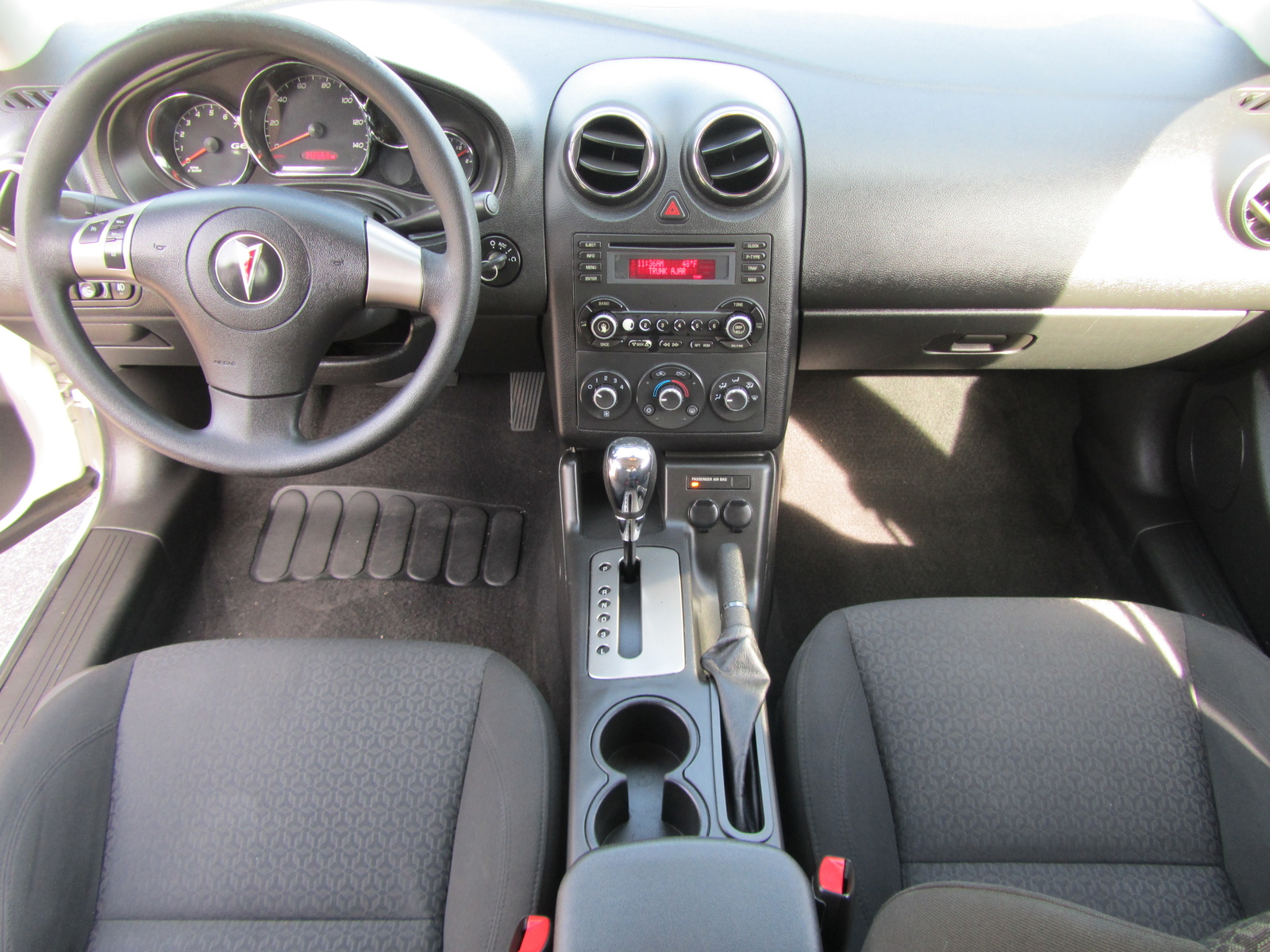 The Pontiac G6 features smooth styling with clean lines and attractive curves. In all of its forms, the G6’s proportions and stance are scaled just right for the size of the car. The convertible and two-door coupe models have a dramatically sloped roof and frameless doors that accentuate their styling.

The car’s cabin is attractive and welcoming. It’s decidedly more upscale than Pontiacs of generations past, and as a result, there are far fewer wobbly buttons, cheap plastics, and creaky interior bits. Buttons and controls mounted on the dash are handsomely finished and feature chrome surrounds that up the luxury feel considerable. The front seats are nicely bolstered and are comfortable despite being designed for sporty driving. 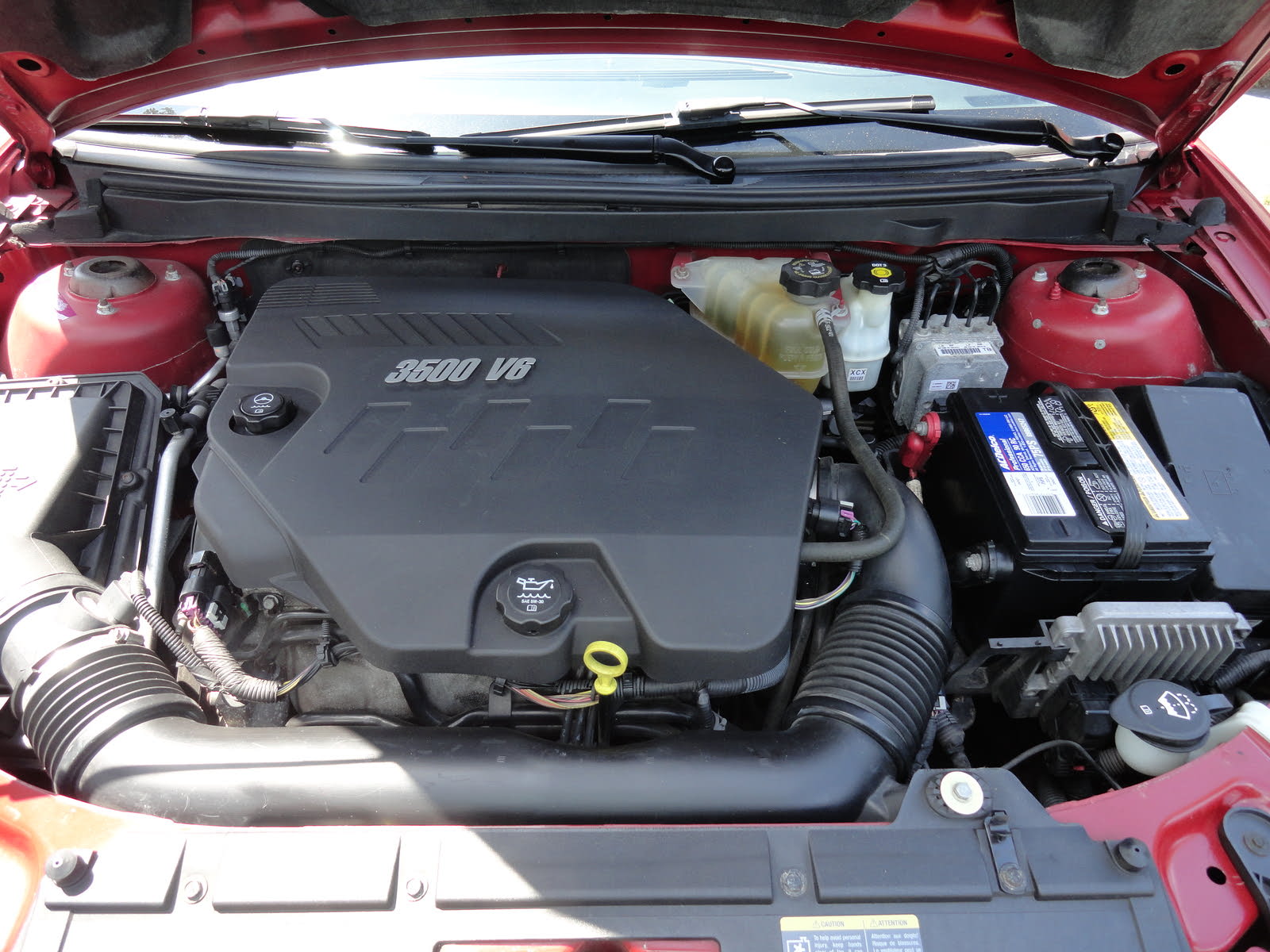 The Pontiac G6 gracefully walks the line between sporty and smooth. The base 2.4-liter four-cylinder engine produces 169 horsepower and 162 pound-feet of torque. The available 3.5-liter V6 makes 224 horsepower and 220 lb-ft of torque, and the range-topping 3.6-liter V6 is rated at 252 hp and 251 lb-ft of torque. Front-wheel drive is standard across the line. The standard four-speed automatic transmission is a good match for the first two engines, finding its gear and staying there until the timing is absolutely right for a shift. The optional six-speed automatic is every bit as good, and pairs well with the 3.6-liter V6.

Thanks to its GM Epsilon platform's long wheelbase, the G6’s ride is quiet, comfortable, and composed, while also being surprisingly fun to drive. The car is responsive and the suspension has been tuned for comfort while also keeping the car tidy when the road gets curvy. Nicely weighted power steering, a reasonable traction control system, and a comfy steering wheel make the G6 a great car for longer drives, as driver fatigue is minimized. 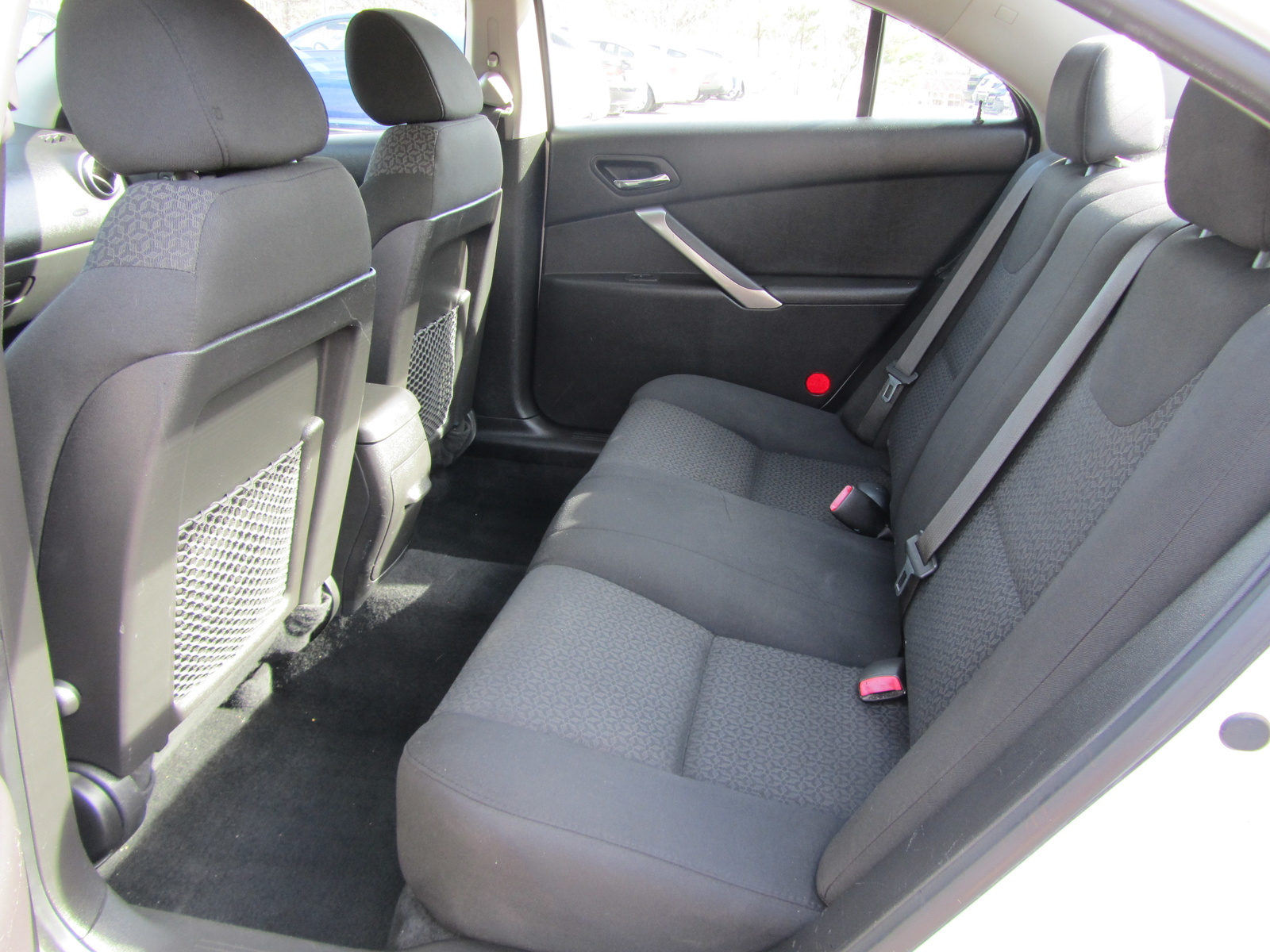 One of the G6’s biggest selling points is its ability to fill multiple roles. Buyers seeking a comfortable family sedan won’t be disappointed, while those wanting a relatively sporty experience will also get what they’re looking for. Well-padded front bucket seats and a spacious back seat make the G6 sedan ideal for families and road trips, while the coupe and convertible work well for young buyers, with the optional rear bucket seats. The driver's seat offers a good level of adjustability to find a comfortable driving position.

The G6 Convertible was developed in partnership with a company called Karmann, which has built droptop models for Volkswagen and others over the years. As a result, the top’s operation and engineering are smooth and quick. From start to finish, the retractable hardtop can be raised or lowered in under 30 seconds and stows itself neatly away in the trunk when in the down position. That greatly reduces trunk space from an already small 5.8 cubic feet to a miniscule 1.8 cubic feet.

Head room and leg room are more than acceptable in sedan models, but the coupe and convertible will be tight for taller people. The optional sunroof cuts into head room even further. Though it's roomy, buyers with families might need to consider an SUV. 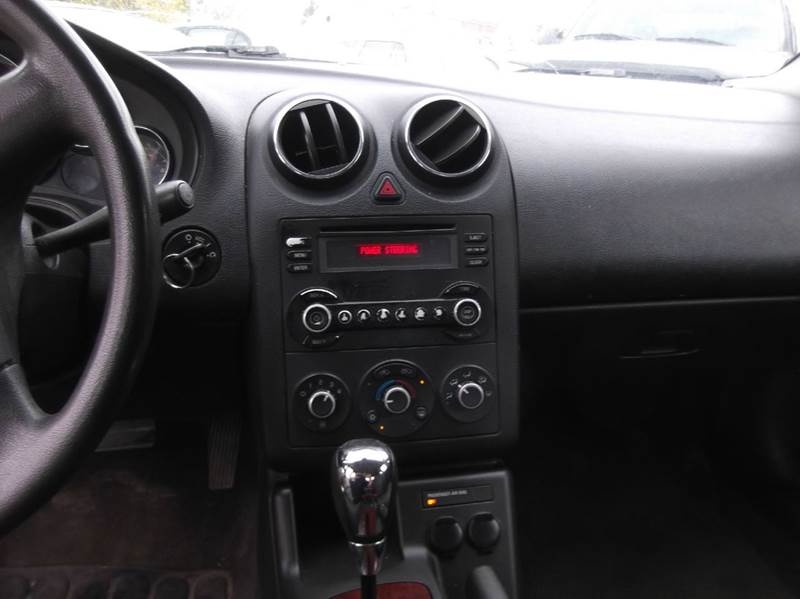 Standard tech in the 2007 G6 includes an AM/FM stereo with CD player, air conditioning, remote keyless entry, and cruise control. The car can be optioned with SiriusXM satellite radio, a 200-watt Monsoon sound system, power windows, a remote starter system, a subwoofer, OnStar, and a radio data system. The Pontiac’s straightforward layout and clean interior make for a simple and intuitive experience. All buttons, knobs, and controls are exactly where they’re expected to be, and are sized and labeled to be easy to use when the vehicle is in motion.

The G6’s quiet ride and peaceful interior work to boost the stereo’s effectiveness. Sound is clear, bass is undistorted, and the speed-sensitive volume system works well. Even with the available panoramic roof, the car’s interior sound levels stay at reasonable levels. 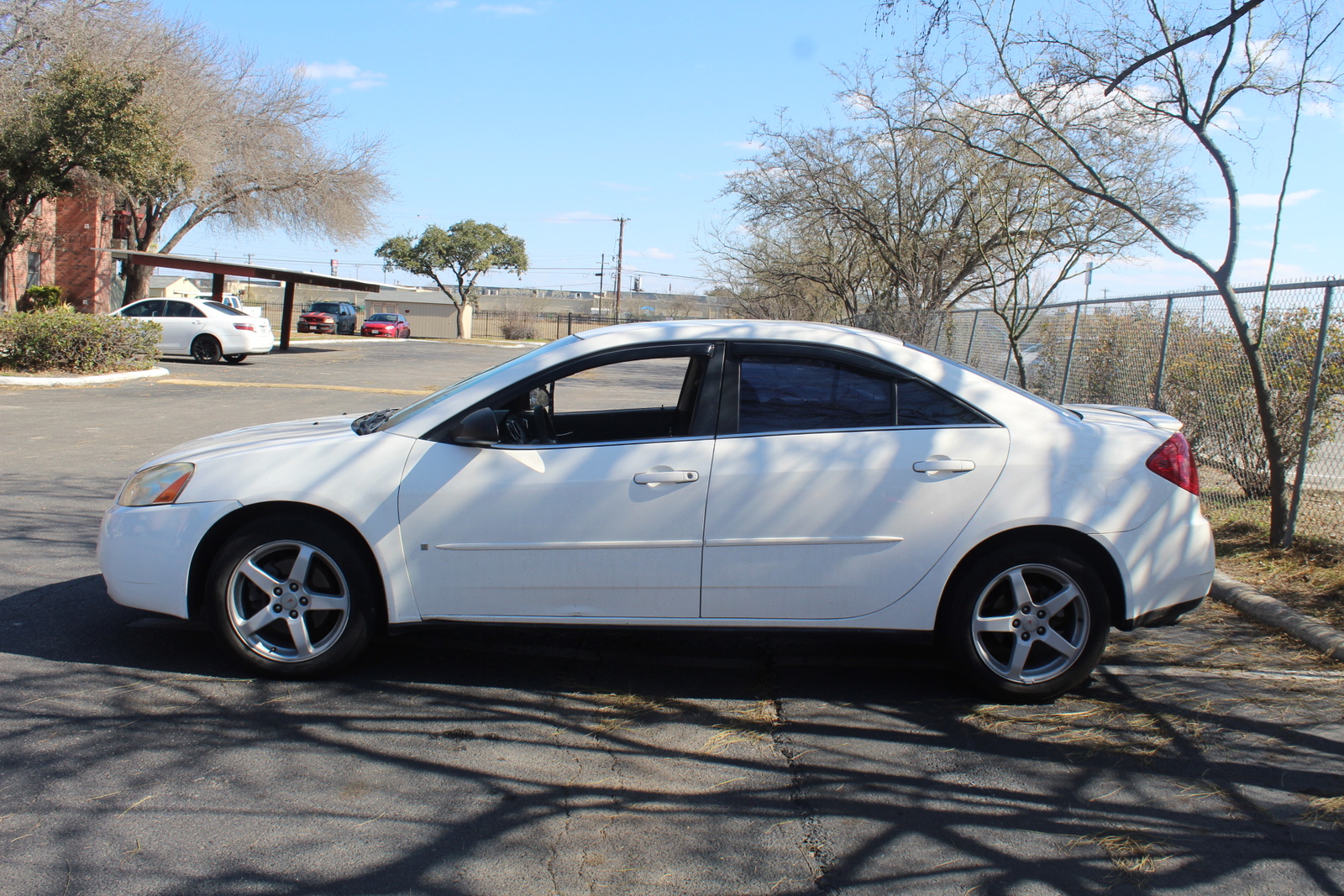 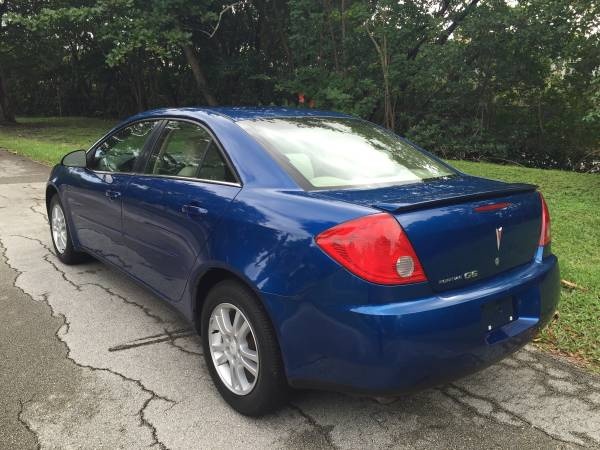 Similar to other General Motors vehicles, the Pontiac can be customized in a number of ways, so choosing a cheaper trim level doesn’t necessarily mean buyers are stuck with that trim’s feature set. That said, Pontiac held back what are generally considered basic features for added-cost packages and trim levels.

Gas mileage is competitive, especially given the breadth of choice in the G6 lineup. With the four-cylinder engine and an automatic gearbox, the G6 delivers EPA-estimated fuel economy of 20/30/24 mpg city/hwy/combined. The 3.5-liter V6 engine and four-speed automatic deliver fuel economy of 18/28/21 mpg and the 3.6-liter engine lands at 17/26/21 mpg.

SHERRITA IT ALWAYS NEEDS SOME TYPE OF REPAIR. EVERY TIME I TURN AROUND, IM PUTTING MORE MONEY INTO IT. ON TOP OF THAT, THE SAME PARTS KEEP GOING BAD. I DONT KNOW IF ITS BECAUSE THEY ARE CHEAP, OR IF IM TOO HARD ON MY CAR, AND I DONT THINK THAT I AM. I WOULD NOT RECOMMEND THE PONTIAC G6 TO ANYONE.

ksantac1 I need transmision fluid, but dont know where it goes, there isnt a stick. like the oil. can some one help?

Michael ksantac1 . Look in your owners manual and it will show where the transmission dip stick is. It is typically towards the back of the engine and lower than your oil dipstick

No Crank No Start Problem

Can Someone Help Me With My AC Issue?

Hi my name is Blair. I own a 2007 Pontiac G6. I am having issues with the ac blowing cold. I have check all fuses/relays. The AC compressor is turning on, and i can physically hear it and i have ch...

Charger Parked. What Does This Mean. Displayed On My CD Player

Will Headlights Off A Gto Or A G6 Work On A G6?

How Many G6 Retractible Hardtops Were Produced For The 2007 Model; Year