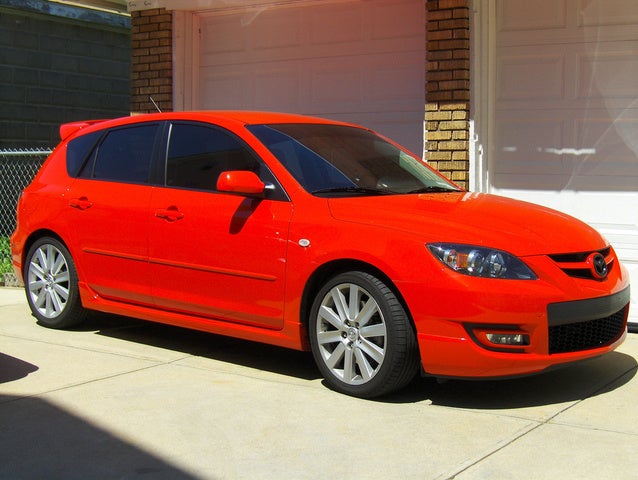 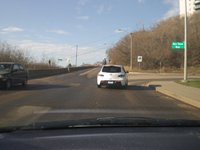 Aggressive, muscular, and quick as lightning, the MAZDASPEED3 was launched in September of 2006 as a 2007 model year car. It followed the introduction in the U.S. of other tricked-out high-performance MAZDASPEED cars, including the 2003 MAZDASPEED Protege, the 2005 MAZDASPEED MX-5 and the 2006 MAZDASPEED6. The MAZDASPEED3 is a high-performance five-door sport compact based on the Mazda3 hatchback. It's powered by a turbocharged 2.3-liter, direct-injection four-cylinder engine that pumps out 263 horsepower. A six-speed manual transmission is standard.
Design enhancements include side skirts, floating fog lamps, a rear roof spoiler, and a beefed-up tailpipe. The suspension has been beefed up as well, and brakes are larger. In addition, the four-wheel antilock braking system is more powerful, and an emergency brake assist system is standard.
The interior is highlighted by black upholstery with red contrast stitching as well as black leather on the steering wheel and shift knob, and a matte black instrument panel.
The MAZDASPEED3 is available in both Sport and Grand Touring packages. Standard features include air conditioning, automatic climate control, cruise control, power windows, remote keyless entry, dual airbags plus side-impact air curtains, xenon high-intensity headlights, and 18-inch wheels.
As might be expected, the MAZDASPEED3 received high marks from both drivers and critics, some of whom called the car nothing less than impressive. Its power, handling, styling, and interior appointments were all cited as positive points.

What's your take on the 2007 Mazda MAZDASPEED3?

Have you driven a 2007 Mazda MAZDASPEED3?
Rank This Car

I Need Help Locating The Source Of An Oil Leak

I have an oil leak. I cleaned off the engine and then observed it while running. The oil appears to be coming from where the block meets the transmission. it is high up on the top of the castings....

Install A Turbo To Non-turbo Car

Hey, quick question, does anyone have been installed a turbocharger from mazda 3 MPS to non turbo mazda 3? planing to install into mazda3 2004 2.0 petrol.

What To Do Next For My Mazdaspeed 3?

I bought a mazdaspeed 3 for a mazda dealership with 75k on the body from and a new engine from Mazda. It came with a injen cai a duel port bov and corksport's cat back stainless exhaust I would...

i have a 2007 mazdaspeed 3 its been in an accident and the doors have been damaged. i want to replace the doors but the speed 3 doors are rare so can i just change all the wiring and just use the do...

Anyone know what the best way to give a 2007 mazda 3 MPS more grunt? I would like to know where I can get a new chip for it.