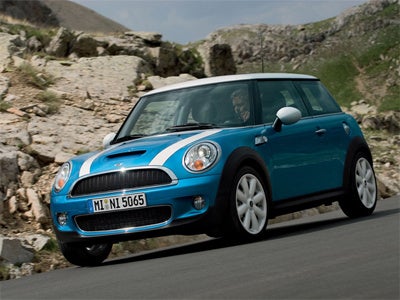 Even though the MINI Cooper hardtop received a complete redesign for 2007, and grew slightly in size (for safety reasons), it was still the shortest car in the U.S., but also one of the widest. The manufacturer calls this a bulldog stance -- short and wide, with the wheels pushed all the way out to the corners. And it's this short, wide stance that gave the MINI its nimble, go-cart-like handling and impressive stability over the road.

Although the new design of the 2007 MINI hardtop resembled the models of the previous years, every exterior panel was updated and reshaped, according to the manufacturer. The 2007 MINI was a little more than two inches longer than previous models, with a new grille, hood, headlights, and taillights, as well higher shoulders and a reshaped roof designed to improve aerodynamics.

The standard transmission for both versions of the MINI hatchback was a six-speed manual Getrag transmission. A six-speed automatic was optional. Paddle shifters mounted on the steering wheel were optional with the automatic transmission.

Inside, design updates included a centrally located speedometer, which also displayed the fuel and temperature gauges, as well as the odometer and warning lights. It was a throwback to the MINI's racing heritage.

The 2007 MINI Cooper was also available in a convertible version, in both standard and S trim packages, though the convertibles retained the engine, transmissions, and exterior styling of the previous year's models.

Drivers highly approved of the MINI's redesign, citing its pumped-up power, improved gas mileage, more refined interior, and new features as among its positive points. Drivers also noted that the MINI held its value well at resale time. On the downside, some drivers thought the suspension could be too stiff, making for a rough ride at times, and the back seat was cramped. But overall, drivers loved the new MINI's style, sportiness, and fun factor.

johnnyt90601 I am seriously considering buying a used 2007+ Mini. What should I be looking for as far as common/expected problems? I was looking at the reviews - it seems everyone is mostly happy. Would a Mini be a smart buy for a everyday car? Thanks

gracembigg I have had my 2007 for about a year and a half now and have paid over $4000 in repairs alone. It has been in the shop now for about 3 weeks and I am waiting on an estimate to fix the timing chain/tensioner (a recalled item, but I am 700 miles past the extended warranty). From what Mini told me and my research done online, I am looking at about $1300-$2000 to fix it. If you add in the $85 oil changes and having to use premuim fuel, this car is not worth it. I was so in love with it for about the first 6 months, but then things just started going wrong one thing after another. Research the repair places in your area and see if they work on Mini Coopers. I have been turned away from several places because they do not have the tools or resources to work on Minis. I wish you the best of luck and I hope you get exactly what you are looking for!

Users ranked 2007 MINI Cooper against other cars which they drove/owned. Each ranking was based on 9 categories. Here is the summary of top rankings.

Have you driven a 2007 MINI Cooper?
Rank This Car

Burning Through Oil Due To Turbocharger?

Had the MINI almost 2 months and the oil light comes on, when checked the oil is low. After filling it back to the proper level runs fine but a couple weeks later same issue comes up again. I heard t...

I have a 2007 Mini Cooper S with a bad engine in Michigan. Interior and exterior in great shape. Don't want to sink $3K plus into fixing the engine. Anyone out there looking to buy a 2007 Mini Coope...

. have gas smell in oil an the oil level is rising , any help or suggestion would be appreciated.

Did anyone ever answer this question? Im so tired of going out every morning just to start my 07 mini cooper s convertible to charge the battery so I won't have to jump it off every damn day. WHAT...