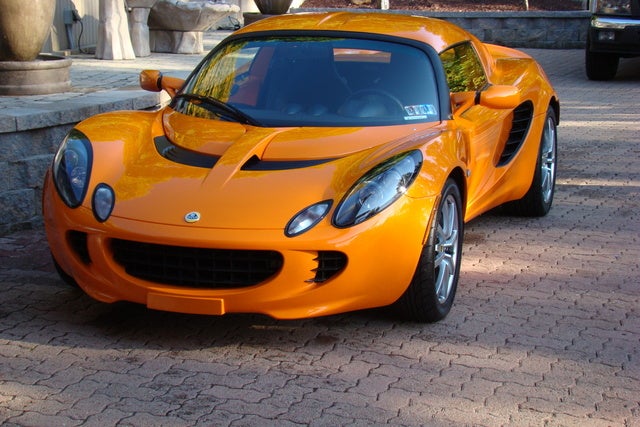 Introduced into the U.S. in 2005, the diminutive, but overachieving Lotus Elise has only minor changes for 2007. Redesigned headlights include some front-end revisions to comply with U.S. government safety regulations. Upgraded audio options from Alpine include a 180-watt unit as standard equipment and an optional satellite-radio ready unit with iPod adapter. Various sport and track package options remain available.

The Elise continues to include its remarkable extruded aluminum, epoxy-bonded chassis weighing only 150 pounds. Clad in lightweight composite body panels it tips the scales at an amazing 1980 pounds, 514 pounds less than a Miata and about 300 pounds less than a Toyota Yaris. The Elise delivers a power to weight ratio that rivals the C6 Corvette. On that marvelous chassis hangs a race-tuned four-wheel independent suspension. Sitting nicely behind the driver and before the rear axle a Yamaha built, Toyota badged 1.8-liter four cylinder engine incorporating Toyota's variable valve timing technology and Lotus electronic mapping spins out 190-hp at 7,800 rpm. This propels the driver and passenger from 0 to 60 in 4.9 seconds, topping out at almost 150 mph with 60-0 braking happening in under a 110 feet.

Not only does the Elise offer super car handling at the price of a C6 Corvette, it has the gas mileage manners of a Toyota sedan. The EPA estimates 24 in the city and 29 on the highway, but owners are claiming 29.5 mpg combined mileage.

And while reviewers found the cockpit too austere for their long-term driving tastes and the highway ride too jarring, owners seem addicted. With one claiming that "I will never sell this car," and another that driving it is, "the most fun you can have with your clothes on," one other lucky owner aptly characterized the Elise as, "a motorcycle with four wheels."

Have you driven a 2007 Lotus Elise?
Rank This Car