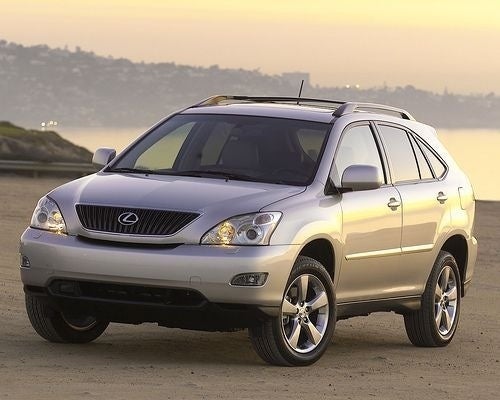 The RX 350 is the third generation of the RX series, a crossover between luxury sedans and SUVs, introduced by Lexus in the late 1990s. The original RXs were built off the Toyota Camry/Lexus ES platform. The crossover concept was a quick success, and the RX soon became the top seller for Lexus.

Throughout the decade, Lexus incrementally dropped larger engines into the RX. The first was a 220 horsepower 3.0 liter V-6 and the latest, at 3.5 liters, made 270 horsepower. The RX 350 had 47 more horses than the 2005 model. Like all the prior models, the new RX was available in two trims: a 4WD or a FWD. It's success can be attributed to the combination of car-like ride and fuel economy with some of the conveniences of an SUV.

Common complaints about the RX dealt with the SUV attributes which were absent. The RX was never touted as an off road performer. It's low ground clearance and car-like suspension makes trailblazing a little nerve racking. The RX did offer Lexus luxury, handling, and interior comfort. Factors like the unique body style and vehicle niche have attracted many satisfied buyers.

Users ranked 2007 Lexus RX 350 against other cars which they drove/owned. Each ranking was based on 9 categories. Here is the summary of top rankings.

Car Starts And Shuts Down After Few Seconds?

I just changed plugs, coils, and pcv valve on my 2007 lexus rx350. Now the car starts but after 2 seconds shuts off. Won't stay started.

What Is The VSC, Track Light

what does it mean when the VSC, Tracking light and electronic control lights come on?

How Do I Reset My Tire Pressure Sensor

Does CarGurus have any role in a problem with a dealer and a customer if the customer has a problem?