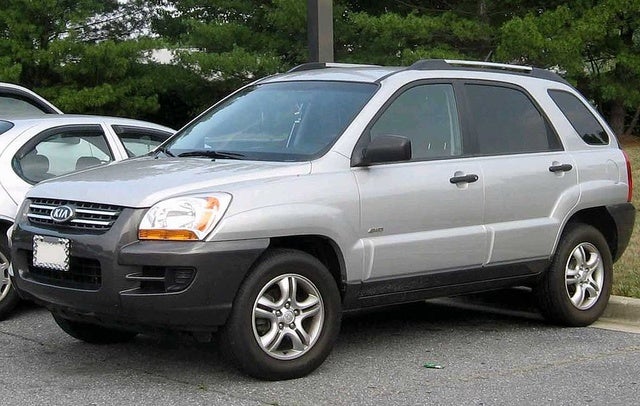 The Sportage, along with the Sephia, was Kia's first vehicle introduced in the U.S. This crossover SUV with two rows of seating for five passengers got a more aggressive redesign in 2005, and the 2007 Kia Sportage offers very few changes. Chief among them are chrome accents on the rear fascia and a new Sport Package for the LX trims, featuring a rear spoiler, foglights, sporty instrument gauges, leather trim, and a mesh grille.

The 2007 Sportage packs a lot of standard features at a pricetag lower than many of its competitors', making it attractive to families. It's available with two engines. The 2.0-liter, 140-hp inline four comes in LX trims only, with either a 5-speed manual or 4-speed automatic. Unfortunately, an automatic transmission isn't offered for the 4-cylinder four-wheel drive model. The 2.7-liter, 173-hp V6 is available in LX or fancier EX trims, with only the automatic transmission. All trims are offered in front-wheel or four-wheel drive.

In 2005, the Kia Sportage was made longer and wider for more stability and more interior leg and shoulder room. The rear seat folds down to expand cargo capacity to 66.6 cubic feet, and the front passenger seat also folds to fit longer objects. Aside from its sluggish acceleration, particularly with the inline-four engine, and its expected so-so gas mileage, most owners love their 2007 Sportage. They particularly point out its highly rated safety features (it received a five-star crash rating from the NHTSA), easy and light handling, and quiet ride. They also like how well even base trims are equipped.

David My 2007 Kia Sportage has been pretty darn good except for a few major issues; 1 it cannot take the Arizona heat, it gets a vapor-lock type problem when the temperature outside is over 100 degrees and you drive it for more than an hour, or you do a lot of short store to store errand runs...even if you don't have the A/C on. The brake light switch recall that I wasn't informed of almost got me in several accidents until I figured out what was going on and then the Kia dealer decided to let me in on the recall :) Aside from that the biggest pain in the rear is the dipstick who designed the engine decided that it was a good idea that you can only access the rear 3 spark plugs and wires by removing the intake manifold...so it only costs about $450 for a tuneup....

Users ranked 2007 Kia Sportage against other cars which they drove/owned. Each ranking was based on 9 categories. Here is the summary of top rankings.

Have you driven a 2007 Kia Sportage?
Rank This Car

Battery Light Comes On, Power Steering Fails. Only Happens When It's Wet Ou...

A few weeks ago, my battery light randomly started flashing on and off and the power steering would fail temporarily. Rear defrost would shut off, power to the heater blower would lessen. This only ha...

Where Is My Vehicle Oil Goig?

We have check the entire engine compartment for leaks and nothing..? No oil dripping everything is nice and dry. However every time we check our oil it's dry. So we put oil in and it shows on the...

Hi I have a 2007 kia Sportage as well and I'm having the same issue I just purchased it less than 2 weeks ago my radio comes on but no sound all the fuses are good I pulled the battery for 5 ...

I Have A 2007 Kia Sportage And Recently Had Auto Zone Replace My Battery. T...

checked the 10a fuse in the door panel and it is okay. what is my next option?

I Have A Kia Sportage Diesel. It Cranks Over But Does Not Want To Start.

I have a Kia Sportage diesel. It cranks over but does not want to start. There is diesel in the fuel rail, so the injectors are not opening to my knowledge. I have changed the crank position sensor ...