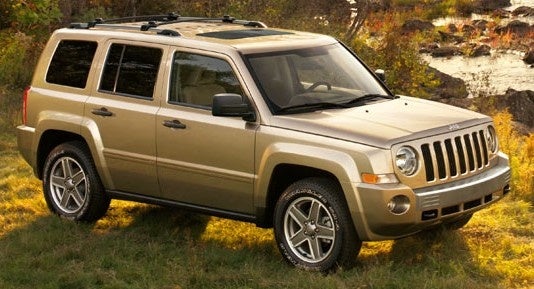 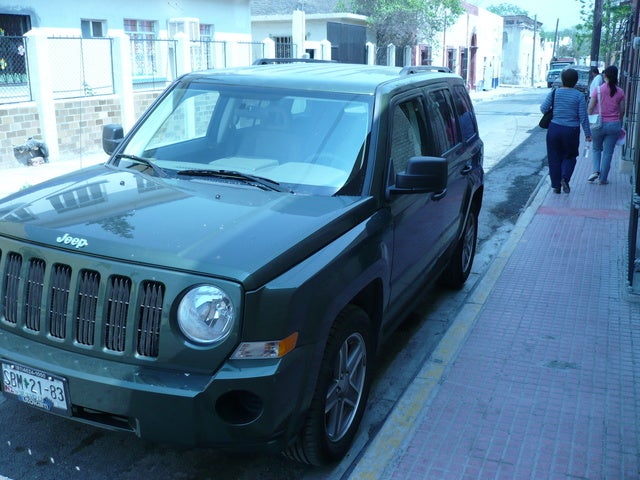 Seeking a new entry-level vehicle in the smaller-SUV market, Jeep has unveiled the Patriot for 2007. Designed to handle like a car (although Jeep still insists it's capable off-road when so equipped), it is based on the Dodge Caliber platform, as is the other debut Jeep, the Compass.

The Patriot calls to mind the old Cherokee, which ceased production in 2001. Although its looks are a bit tougher than the Liberty, it really isn't; the base model Patriot is not even Trail Rated unless it's specifically outfitted.

The 2.4-liter engine delivers 172 horses, and its electronically controlled timing instantly adjusts to the driving situation to provide fuel efficiency or maximum power, whichever is needed.

Of course, the powertrain options were planned with fuel efficiency as the goal. A 4x2 Patriot with manual transmission can attain 30 miles to the gallon. The engine's Variable Valve Timing creates an optimal torque curve, resulting in increased power and efficiency and decreased noise. Buyers can choose the optional Continuously Variable Transmission (CVT) for the best possible fuel economy (up to 8 percent above a traditional four-speed automatic transmission, according to Jeep).

Front-wheel drive is standard on the Patriot, but two 4WD systems are available as options. Freedom Drive I is a full-time system with a locking center differential for situational driving. It is good for general use in inclement conditions.

Freedom Drive II, which adds a continuously variable transaxle (CVT) for low-range gearing, is a must-have for those who plan to tackle the trails. As part of the Freedom Drive II Off-Road Package, it increases the Patriot's off-road quotient considerably, as it comes in an options package that adds brake-lock differentials, skid plates, tow hooks, fog lamps, descent control, low-range gearing, a heavy-duty cooling system, and a full-size spare tire in addition to boosting ground clearance by an inch.

The calibration of engine with transmission is enhanced with Freedom Drive II, giving it superior capacity for crawling over rocks and steeps. The trail-appointed Patriot's stats are as follows: an approach angle of 29 degrees, a departure angle of 33 degrees, and a breakover angle of 23 degrees.

Water-fording is one of the five factors a Jeep vehicle must meet to receive the Trail Rated badge. Patriots with the Off-Road grouping receive further waterproofing of the electrical system and body, making them capable of fording water up to 19 inches deep. A towing package is also available.

Safety received much attention in the design of the Patriot. In addition to standard-equipment front and side-curtain air bags, its full slate of life-saving features consists of a safety cage, crumple zones, door beams, and a steel crossbeam mounted to the rear body pan to help distribute energy during a side crash.

All Jeep Patriots also include the Electronic Stability Program, which integrates all-speed traction control, hydraulic brake assist, and Electronic Roll Mitigation in order to maximize directional stability. A four-wheel independent suspension helps give the Patriot the more car-like ride its target market seeks, according to Jeep.

Speaking of that target market, it's evidently a younger segment with less money to spend. The inclusion of a sliding armrest that adjusts for shorter drivers all but confirms that Jeep is admitting the Patriot will become a "chick car," as much as the maker likes to tout the vehicle's toughness. That armrest also includes a flip-up storage area for a cellphone or MP3 player.

Other standard features on this vehicle include anti-theft components, such as Sentry-Key encrypted keys and an alarm with starter-interrupt, both made by Mopar; remote start is available as an option. Mud mavens and dog owners will appreciate that the vinyl floor in the cargo area can be hosed out when it gets messy.

Optional equipment includes leather seating with heaters, an upgraded audio system with 6-CD changer and Sirius Satellite Radio, a power sunroof, and the UConnect hands-free communication system, which is Bluetooth-compatible. Buyers will have their choice of eight paint colors.

TheHorror Break for paragraphs, please! That is an incomprehensible mess.

Users ranked 2007 Jeep Patriot against other cars which they drove/owned. Each ranking was based on 9 categories. Here is the summary of top rankings.

Have you driven a 2007 Jeep Patriot?
Rank This Car

Where Is The Horn Located

Please Where Can I Find Second Fuse Or Relay Box For 2007 Jeep Patriot , My...

my Ac just stop working. No leaks, free on is good, if I can get a diagram and location of the second relay or fuse box

How Many Miles Do You Get On Average

Spilled coffee 4 weeks ago on the 4WD! Button is on and will not go off. Mechanic can't figure it out either I'm desperate