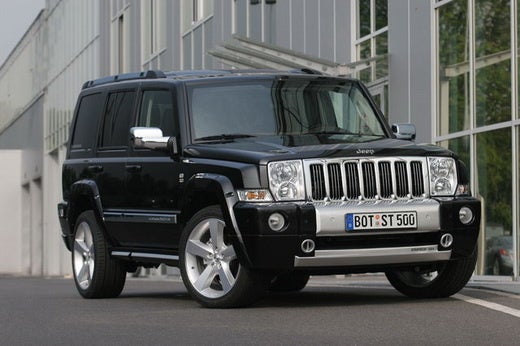 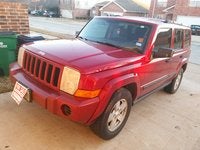 The Commander was introduced for 2006 as the first Jeep vehicle to feature third-row seating. This let it compete with other makers' large SUVs and minivans as the choice vehicle for families, especially larger ones.
With its distinctive military look, the Commander fits its name and offers added appeal for army buffs and those who appreciate Jeep's origins. Its boxy shape recalls the vanished Cherokee, once an extremely popular SUV.
Broad changes for 2007 include the renaming of the base-model trim to Sport and the addition of an Overland trim. Five new colors debut as well: Red Rock Crystal, Steel Blue metallic, Jeep Green metallic, Light Graystone , and Mineral Grey metallic.

This squareness makes the Commander look bigger than it actually is; it has the same wheelbase as the Grand Cherokee and is a mere two inches longer. The third-row seat, which has its own separate climate control, is built for two - preferably two children. It folds flat, as does the second row, to create tons of cargo space when needed.
Stadium-seating in the Commander gives each row a higher view than the one in front of it, which facilitates conversation (of course, that won't be happening in cars with DVD entertainment systems). The back two rows get a treat if their trim is so equipped: in addition to a power sunroof in the traditional location, the Limited features a pair of fixed skylight panels extending over and beyond the second row (it's an option on the other trims).
This thing may look as if it drives like a tank, but rack-and-pinion steering and a short- and long-arm independent front suspension improve the ride. But this Trail Rated rig is ready as can be to leave the road. The Jeep "Trail Rated" badge certifies that each vehicle is capable of each of five categories for off-road use: traction, ground clearance, maneuverability, articulation, and water fording.
At the same time, it's outfitted with conveniences and comforts that today's car-buyer wants, needs, or thinks he needs. A remote control on the key fob can both open and close the tailgate lift, as can a button in the cargo area. Rain- and speed-sensitive windshield wipers take the thinking out of keeping that glass clear, and an express, three-blink turn signal activates with a mere tap on the stalk.
Those things may be bonuses, but safety equipment is a necessity. Every Commander comes with multi-stage driver and front passenger air bags, plus front and rear side-curtain air bags. The vehicle earned 5 stars in the NHTSA's frontal crash tests for driver and front passenger; it was not rated in the side crash test.

What's your take on the 2007 Jeep Commander?

Tallterp Hate the jeep commander. It was a shame of the brand Jeep. Very weak engine 3.6 for big body and eats a lot of gas. My buying it was big mistake. I was happy to sell it out.

Have you driven a 2007 Jeep Commander?
Rank This Car

My Jeep commander 3.7L had recently suddenly died while driving with the lights dimming, dash lights all went off and flickered before engine stalled to a stop. Tried to crank a couple times after b...

My jeep won't start and it says transmission over temp

Does not start. Leave for hours, generally will re-start then function well for 1-2 months then same crap again. I see lots of folks with same problem but no one has written about a solution or serv...

How To Fix Jeep That Only Starts Sometimes

I have a 2007 Jeep Commander and it did not start so IO had it towed to Dealership and the next day they said it started for them with no problems found. I am scared that it will happen again and we...

I have one of those commanders that when it rained, water pooled on the floor of the driver side. It has been this was no matter the sealing of the sunroof, windshield and replacement of windshield...