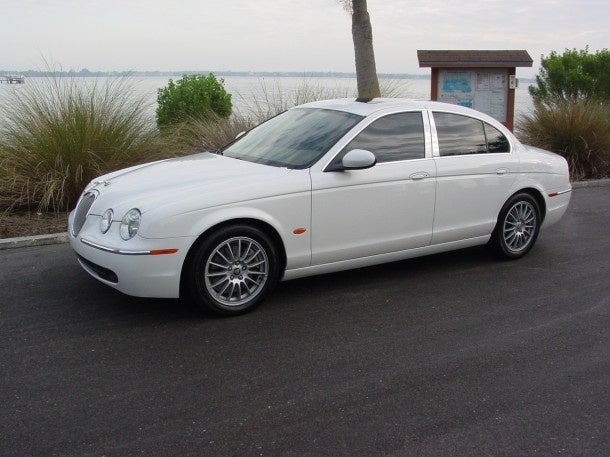 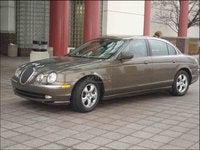 The S-Type Jaguars are the British marque's midlevel sedans, positioned between the entry-level X-Type and classic XJ series with respect to price. While this line begins just below $50,000, the top shelf S-Type will cost $15,000 more. There are a few minor changes for this eighth and final year of production, including new seat piping and revised burl walnut veneers. An adaptive radar-based cruise control system has also been added to the options list.
The S-Type is built atop Ford's former Lincoln LS platform, and shares many structural and mechanical components. Despite some overlap with Ford, the S-Type is unmistakably a Jaguar, in terms of both price and presentation. The Jag is set apart, even from its high priced competitors, by its interior and exterior design. The S inherits many styling cues from the Jaguar sedans of the 1960s, namely the Mark II. The grille, headlight design, and hood shape. A new design, called the XF, will replace the S-Type in 2008. So this might be the last chance to enjoy many of these details.
There are three variations of the S-Type available for 2007. Drivers who are used to more pedestrian sedan might have a difficult time distinguishing one from the next, unless they peaked at the price. The S lineup begins with 3.0 liter V-6 version, which offers 235 horsepower. It comes equipped with leather, walnut trim, a moon roof, dual zone climate control, 17-inch wheels, and full power accessories.

The next step is 4.2 liter V-8 S-Type, which supplies the 3900 pound car with 300 horsepower and 310 pound-feet of torque. This model includes all of the previously mentioned features, along with a sound system upgrade, xenon headlights, a navigation system, and an electric rear sun shade.
The top shelf R-Style is almost an entirely different car. The 4.2 L V-8 is enhanced by top-mounted supercharger, which boosts horsepower from 300 to 400. Jaguar claims a 5.3 second 0-60 time for this version. Oversize disc brakes, wider tires, 18 inch wheels, and Jaguar's Enhanced Computer Active Technology Suspension system have also been added.
All S-Type models are rear wheel drive. A six speed automatic is the only transmission option.

Jagguy417 As a three time S-type owner I consider it to be the best mid size built. These cars combine unmatched styling inside and out. A superior comfort combined with outstanding performance. My first was a 2000 model. We put nearly 200,000 miles on her with nothing other than normal scheduled maintenance. Prior to our S-types I was a Mercedes E type devotee. The E series is still a great car but can't touch the style of the Jaguar S-type. Both provide the optimum of drive and state of the art options. Our current 07 will be kept a good while longer than the others since the replacement XF model lost, in my opinion, the best combination of old and new found in the S-type. Finally a word of caution. If you fail to do the recommended service, you can expect to spend some hefty bucks. Although it helps to share some Lincoln parts many are Jaguar exclusive and very expensive. If you are looking to buy used be sure you check the service history. It's worth paying extra for a well maintained car.

Have you driven a 2007 Jaguar S-TYPE?
Rank This Car

I have a 2007 Jaguar S type 4.2 and the instrument panel has a symbol that is circular and it looks like a wheel and I want to know what that means. Also the ABS light is on what does that mean?

Where is the location of where you check or add transmission fluid in a S-type jaguar 2007? I have looked my cars motor over,& I cant find it.

FM radio is perfect but only get static when switching to AM on any station.