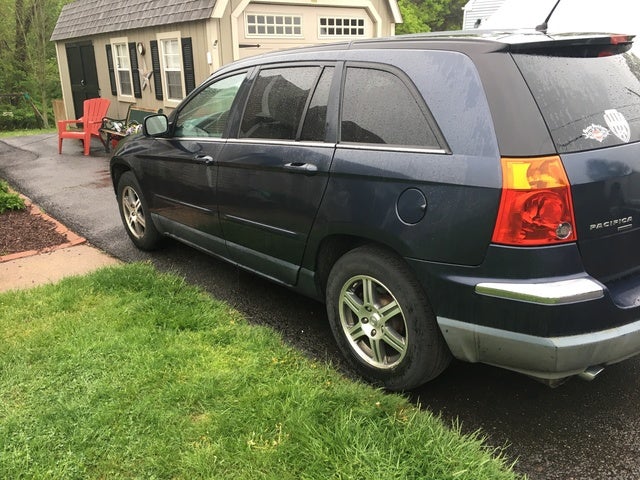 The Chrysler Pacifica arrived in 2004, representing the American auto manufacturer's first venture into sport utility vehicles. Daimler Chrysler had experienced great success with both trucks and minivans. The Pacifica embodied a combination of the two. It was built from the same platform as the Dodge Caravan and the Chrysler Town and Country, but now an all-wheel-drive layout was available.

For 2007, the Pacifica receives several upgrades, including a new, more powerful engine and a six-speed automatic transmission. Standard safety features have been updated, and Chrysler has added side curtain airbags and stability control to the list. Inside, a new audio system includes MP3 capability, and a larger screen is added to the optional back-seat entertainment system.

The Pacifica is available in three trims: base, Touring, and Limited. Each trim has a front-wheel-drive and AWD variation, producing six Pacificas in all. The base model comes standard with keyless entry, a CD player, air conditioning, power windows and locks, and power adjustable front seats. The Touring Pacifica adds dual-zone climate control, a third row of seating (now able to accommodate six), and a leather-wrapped steering wheel and shifter. The Limited model upgrades to full leather seats, automatic climate control, a six-disc in-dash CD changer, and a back-seat DVD entertainment system. The Limited is elible to receive an optional navigation system.

The base front-wheel-drive model is powered by a 3.8-liter V6, which makes 200 horsepower. Every other Pacifica is equipped with a new 4.0-liter V6, which bumps horsepower up to 253. The fuel economy estimate for this engine is 16/24 mpg for both drive trains.

What's your take on the 2007 Chrysler Pacifica?

RobinandBill Bought a used 2007 limited. I've had it one month and other than blind spot it is beautiful, smooth, good power and I love all the bells and whistles. ☆☆☆☆☆

Have you driven a 2007 Chrysler Pacifica?
Rank This Car

2007 Chrysler Pacifica just died on my daughter while driving. the code read P0513, immobilizer key not sending signal to powertrain. so I got a used ignition key switch assembly and still not start...

My 07 Chrysler Pacifica has been having issues shifting (it's an automatic) and I'm 99.9% sure it needs fluid but I need to know what kind of transmission fluid and how much do I use as well as wh...

So I need to replace my catalytic converters and I have been to many different places and every single one I have purchased does not fit on my car so I am unable to replace them what could my probl...

I have had my car in to 2 different repair shops for blowing cold air. The first shop replaced the thermostat, back flushed the heating core, replaced antifreeze, and reset the control panel (delay)...