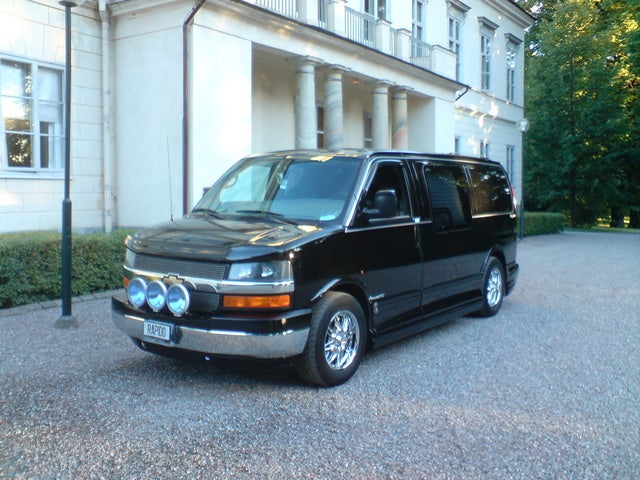 Average user score
4 ⁄ 5 stars
Based on 3 reviews
I'll Miss This Van by Mia — I didn't dislike anything about the van except trying to use it as an everyday vehicle when my husband has our Subaru was a little cumbersome. We loved camping with it cause we could take everything. ... Read more
Good Chassis, Not So Good Rv Parts by Roger — This is the chassis for our 21' Coachmen RV Freelander. Great ride good reliability - for the GM parts_ not so good for Coachmen workmanship or parts. Numerous RV component failures. 10.8 mpg for fir... Read more
When You Need Serious Power To Lug Your Equpment Around The Chevy Expresss Has What You Need by Matt — Great truck, GM has been building these right for many years now. Locking diff works well. Read more

If they adopt any more children, Brangelina may want to consider the 2007 Chevrolet Express, a cargo/passenger van that's used mostly for fleet purposes, but can seat anywhere from eight to 15 people. A 12-person seating arrangement is standard. The closest rival to the Express is the Ford Econoline, but the Express has a bit more modern styling, and for 2007 it gets a new engine.

The 2007 Express comes in an LS trim, which is sparsely outfitted with air conditioning and a radio, as it's aimed mostly at fleet use. An upgraded LT trim comes with power features, cruise control, and remote entry. Power front seats and a 6-CD player are options on the LT. An extended version is available only on the Express 3500, which is 20 inches longer than the 135-inch standard Express. This extended version seats 15 people. ABS brakes are standard across the line, but stability control is only available as an option on the 3500. An available option is the split-opening 60/40 driver's side door to ease passenger access. Rear doors open 180 degrees for easier cargo loading. Another nice feature is an all-wheel-drive option for the 2007 Express 1500, a feature that owners appreciate. The only real drawback is poor expected gas mileage.

What's your take on the 2007 Chevrolet Express?

Have you driven a 2007 Chevrolet Express?
Rank This Car

Why Do I Have No Heat

07 chevy 3500 express. new thermostat, blower is blowing cold air even with heat on. why do i have no heat

i believe it is my heater core that is leaking not in the cabin but i see water dripping to the ground and a big rust stain on top of the frame in that area. i have heat and blower works but when i ...

after posting yesterday i have exposed the ac condenser and the heater core. no signs of rust or water. the hoses from the heater core are not wet and the same with the water pump hoses radiator not...