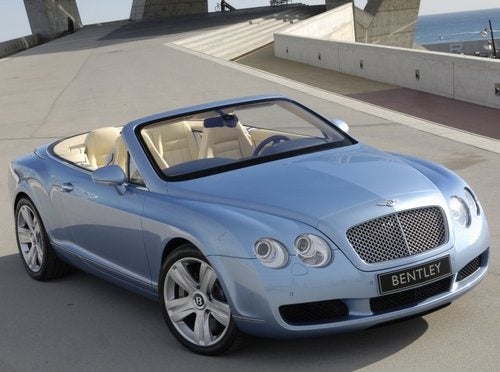 The Bentley Continental GTC is a convertible variation of the GT coupe. The convertible was introduced in 2005 as a 2006 model, arriving shortly after the Continental Flying Spur Sedan. All three models share the Volkswagen D-Platform, which is also used by the Audi A8 and the VW Phaeton. This platform is a significant piece of news for the new Continentals, because all previous models were built from a Rolls Royce foundation.
The GTC's power plant is a Volkswagen-designed 6.0 liter W-12, with two Borg-Warner superchargers. The 552 horsepower engine is mated to a new six speed automatic transmission, which sends power to all four wheels. The W-12 is unique for its even torque distribution: a total of 479 pound-feet is available anywhere between 1600 and 6000 rpms. The GTC zips from 0 to 60 miles per hour in 4.7 seconds, and through the rest of the speed range equal ability.
The three new Bentley Continentals are all priced to attract a larger group of buyers. These models are not too far beyond the most expensive offerings from BMW, Mercedes, Jaguar, and Maserati. However, they will all meet the demands of the typical Bentley and Rolls buyers. Some personal modifications are available through Bentley's in-house coach builders, the Mulliner company.

What's your take on the 2007 Bentley Continental GTC?

Have you driven a 2007 Bentley Continental GTC?
Rank This Car

I Replaced The Battery In The Remote Control Unit But It Still Says Battery...

How Do You Arrive At Fair Value On Your Used Car Listings?